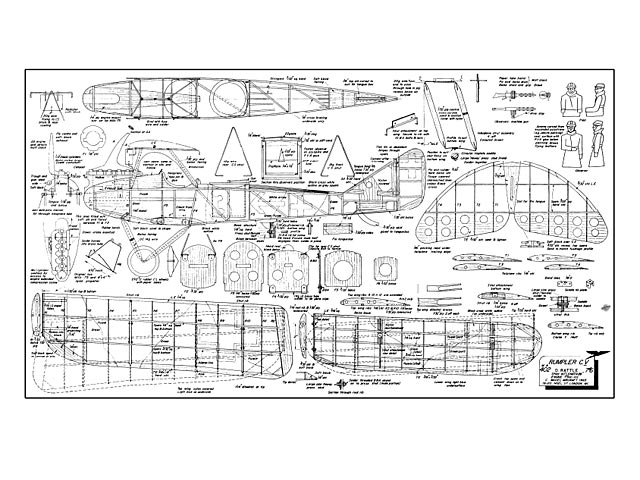 THE Rumpler C.V was one of the later types of reconnaissance aircraft to come into service on the Western front and was very successful in this role, having an extremely high ceiling which made it very difficult to intercept. Dennis Rattle's very practical F/F model, presented here, bears markings revealed by Imperial War Museum photographs - the white arrow was a unit marking, whilst the figure 3 indicated attachment to the Third Army of 1917/18.

Construction. Fuselage: Start with the sides and build one on top of the other, to ensure accuracy. Driill the 'Pop' stud fixing holes at this stage. Make a sub-assembly of bulkheads 1 to 4 with engine bearer. The latter is shown spaced and drilled for a Mills .75. Some 2-3 deg left side-thrust can be incorporated when drilling bearers. In making this sub-assembly, use a hardwood glue and bolt the strut and undercarriage fittings to bulkheads 2 and 4 prior to assembly.

Assemble the sides to the bearer sub-assembly, join sides at rear, adding bulkheads 5 and 6. Now add cross bracing on underside and the decking stringers. Complete the rear end of fuselage by adding box for fin tongue; ensure that this box is correctly aligned before fixing and then sheet in the tailplane platform and sides.

Locate the tailskid into the bottom of the box. Some care is necessary when bending the sides to former 1. It is advisable at this stage to assemble the centre section struts into their fittings (bulkheads 2 and 4) and fold them back whilst the soft balsa block is shaped between nose and bulkhead 3.

The cockpit roaming is made from thin card. Continuing aft, soft block is again shaped in situ to rear gunner's position. The rear cockpit is a sub-assembly and is offered complete into position in the space between the top ring and fuselage. The side is faired in, using stiff paper..." 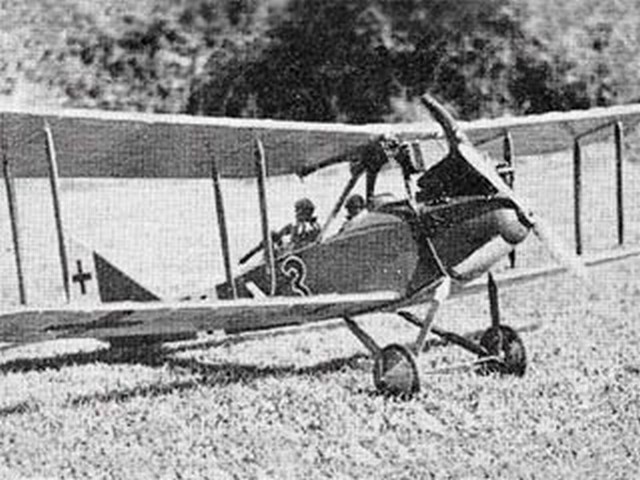