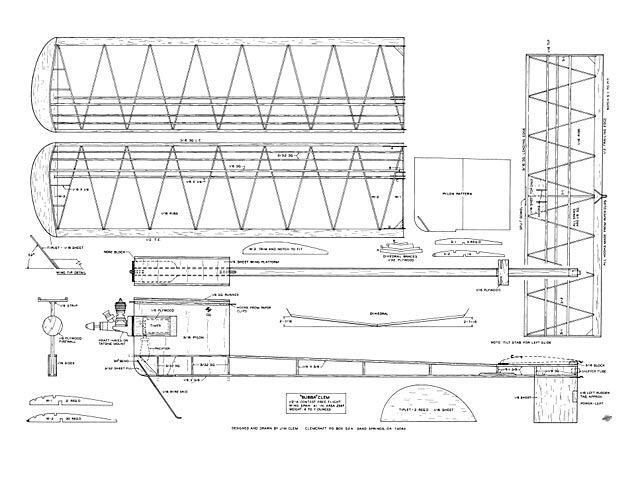 Quote: "Free-flighters have definite ideas about what their planes should look like and how they ought to perform. Some fliers swear by large lightweight ships that will glide forever. Others prefer small hot jobs that climb like scalded owls. Both the high-thrust underslung rudder jobs and the low-thrust rear-fin ships have their proponents, as do all variations in between. The combinations are limitless.

As Jim Clem fans know, Jim's designs have run the gamut of design parameters from the high-thrust Witch Doctor (oz2668) of the late Sixties, to the lightly loaded "Okie Bird" of the mid-Seventies, to the '79 reigning Nats champion, the Witch Hawk (oz4466). In each design, however, two traits have been in evidence - ease of construction and reliability of performance. So it is in the case of Jim's newest ship, the Bubba Clem. Departing from conventional planforms or combinations thereof, Jim elected to use a straight dihedral, a semi-high thrust line, and wing 'tiplets' on this ship. The result is an interesting-looking departure from contemporary airplanes that retains the contest-winning capabilities of Bubba's ancestors.

The name itself is also a distinct depar-ture from Jim's previous efforts and deserves additional comment. Quite appropriately, the plane was named after the Clems' oldest son, Steve (Bubba), who has helped Jim at the field and in the chasing of free-flight models since he was a young boy. Now 24 years old, Steve never complained about helping his dad, even though he personally never developed an interest in building or flying. 'Bubba' is Jim's way of honoring him.

Although unconventional in appearance, the ship has terrific contest potential. At 234 square inches, it falls into the scalded owl category as far as climb is concerned, yet its fairly high aspect-ratio produces excellent flight times, even without thermal help. Easily built and trimmed, Bubba employs balanced forces, needing no wash-in or wash-out in the wing panels, and only a small amount of rudder tab to get it to groove into its left-hand power pattern.

Construction Notes. Start construction by laying up the pylon blank and then cutting out the pylon and rudder pieces. Lay out the fuselage framework on the building board. Begin at the nose area with the 3/32 sq pieces, and then add the 1/8 x 3/8 in top and bottom longerons and formers..." 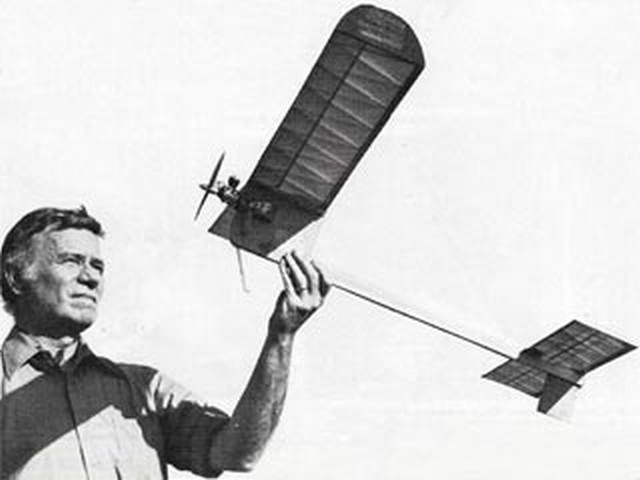