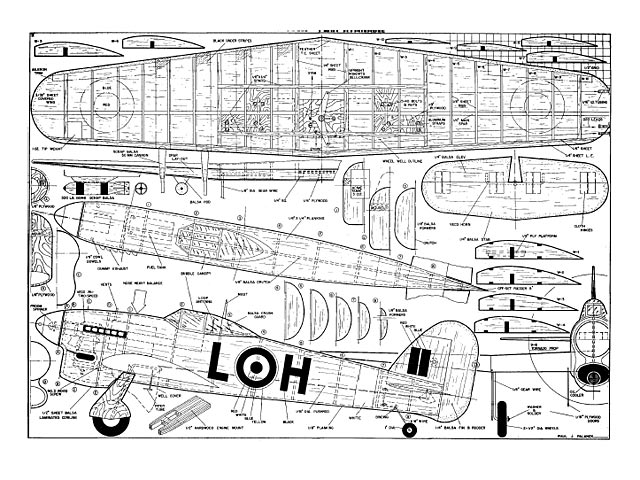 Quote: "The Typhoon like many new aircraft had its teething problems. One of the initial troubles to rear its ugly head was a runaway engine, resulting in bearing failure and total collapse of the oil system. This condition was corrected with modified airscrews. Further on down the line, during severe dives, the tail structure had a tendency to take leave of the rest of the airframe. To say the least, a good number of fine pilots were lost to this malady. In time, all was worked out, resulting in a superior fiighter-bomber and at the time of its heyday in WWII, it was the fastest fighter in Britain.

Typhoons were designed for low and medium altitude work. It was a most formidable fighter-bomber with four 20rnm cannon in the wings and a pair of 500 pounders slung under the wings. This machine raised havoc with German shipping, industry and of course the military. As a fighter its chief success was against Messerschmitt ME-210's which relied on great speed to get away with hit-and-run raids on the British Isles. The Typhoon could easily overhaul the German ME-210's.

Since our design is a full 1 in to 1 foot scale, the model spans 40 in. For power we decided upon a Veco .35 two speed, as it has a low silhouette, therefore being well suited for cowling. A Roberts bellcrank is mounted in the wing employing three lines, one of which controls engine speeds. The color scheme is that of the period, camouflaged upper surface, with sky blue bottom. Black and white under wing stripes mark the design as a D-Day Invasion aircraft. Since the model does carry a short nose moment, nose heavy balance should be carefully considered in the initial building of the fuselage and wing structures.

The fuselage is built around a vertical 1/8 in sheet balsa crutch. Shape the crutch allowing the 1/16 in hardwood engine mounts and Acme fuel tank to slip fit into the crutch openings. Securing the fuel tank and mount to the fuselage crutch is the first step..." 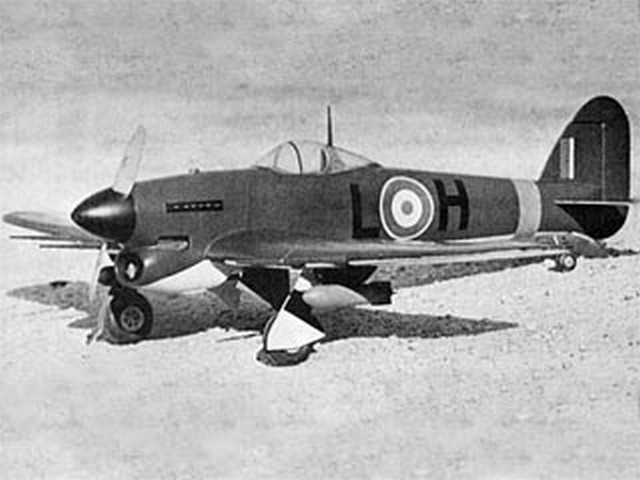