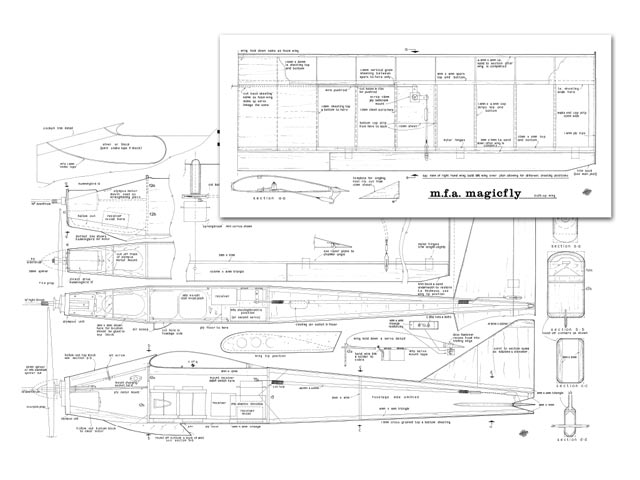 The plan shows both a veneered foam wing and a built-up wooden wing.

It is some years since I first flew the 'Magic Fly', yet surprisingly, despite the passage of time, mine is still in flying nick and still gets the occasional airing!

Model Flight Accessories is one of Britain's independent manufacturers and it is to their credit that they were one of the first to recognise the importance of electric power as a potential source of model propulsion. Previous reviews of the original 'Magic Fly' were critical of the fact that the foam winged model was not the lightest and the available power was marginal. It is to MFA's credit that the MK2 Magic Fly has taken these criticisms and made the best out of them.

Today's kit makes maximum use of established design philosophy and retains the same colourful box art and the printed plan; additional notes concerning the changes from the Mkl are included, together with sketches, that should be within the realms of anyone capable of assembling the bask kit. Our example had the built-up wing (as opposed to the foam one!) which was marginally quicker to build than the foam alternative and certainly was much lighter. On the power plant front, the same Olympus belt drive system is used but gone is the 540 or 550 can style motor. Instead is offered the NEW MFA 'RX 15' power pack.

There is a marked resemblance between this new motor and the Technopower and Technituned motors from Tamiya, which can be no bad thing, for the Tamiya style motors pack a deadly punch! Another change is the dropping of the 8 x Sub C cells ( in the neatly moulded MFA red plastic end caps), in favour of the 6 cell, twin stick-of-three, battery pack, so favoured by the R/C car brigade. Apart from the weight saving, a six cell pack is much easier to charge from the 12 volt car battery.

How she goes together: Construction of the 'Magic Fly' is traditional. The printed plan sheet (not a dye-line print like in many kits!) shows the optional foam wing with a secondary sheet showing the built-up, alternative structure. The wood quality throughout was good with the cut parts separating cleanly from their surrounds.

The wing section is of semi-symmetrical format being just 'not quite' flat bottomed. It has a blunt, well rounded leading edge that aids its acrobatic performance. Structurally it holds no surprises, featuring top and bottom spars over 1/16 ribs. Top and bottom leading edge sheet is fitted, which, together with interspar webbing out as far as the semi-span, forms a traditional D-box. the remainder of the wing ribs are cap stripped. The trailing edge is made up from strip wood to which is added the pre-shaped trailing edge 'proper', that incorporates the cut out portion that forms the aileron. There is a taper to the outboard rear edge of the aileron, that when sanded to to restore the section, results in the equivalent of a bit of washout at each tip. 1/16 ply tip plates are also a feature of the design that help to make for smooth flight, free from any tendency to tip stall. Top and bottom centre section is sheeted, making, as said before a very traditional wing of light weight and more than adequate strength.

The aileron control system is of the 'push rod and bell-crank' style (snakes are featured in the foam wing) but one imagines conversion to torque rods would not be difficult if this was your desire. Structure assembly time for the 'Magic Fly 2' wing was only one evening using cyano adhesive to keep the weight down (and to keep the wait down!)

Fuselage structure is a simple balsa sheet box, with formers front and rear of the cabin area. As is often the case, the fuselage sides are spliced to ease manufacture and to get them in the box!. Again, as is often the case, this is an area of concern to many, yet a perfectly satisfactory approach in practice! In fact, the subsequent 'burying' of the model sans wings caused damage to the forward end only, the spliced area remaining firmly intact. Once more, the use of cyano adhesive produced a finished fuselage in just one evening. Fin, tailplane and elevators (there is no rudder!) are from pre-cut sheet of excellent quality, requiring only the edges sanded, prior to fitting them in place.

The fuselage now features a built-in battery box, with the access via a hinged plywood door in the lower side of the left-hand fuselage panel. Rapid battery changing between flights can now be undertaken without removing the wings. Another recommended change is the adoption of the mini radio equipment (Fleet is advised and shown on the drawing) together with MFA Electra throttle. This latter unit not only provides control of the motor from the transmitter, but also follows the current BEC technique of providing the power for the receiver and servos from the flight battery, thereby saving the weight of the receiver nicad pack! Failing this, of course, there is nothing to stop you from retaining the receiver nicad and turning the motor on and off with a servo-operated switch, as supplied with the RX 15 package.

So from the point of view of construction, there is little to cause any concern - even to the near novice - after all, the 'Magic Fly' is an 'aileron' model and perhaps not suited to the complete beginner! Clear, well laid-out drawings and an adequate instruction booklet cover all of the basics - but be careful for there is only just enough strip wood, not allowing you to make mistakes.

The precut plywood parts are all cut from 1/16 in ply and then laminated in pairs to make 1/8 in thick parts. Once more, the use of cyano adhesives gives rise to no elongation of building time and produces light, tough parts. Some of these ply parts are used for the wing mounting system which comprises a flat tongue at the front, which slots into the ply top half of the front former.

The power department: However, back to the nose end and the motor mounting. Optional motor installation is shown offering either the Hummingbird '15' or '20' running straight. Now I've never seen a 'Magic Fly' fitted out in this manner but I've no doubt from experience that flight would be possible in this mode but I would guess that performance would be marginal and for calm days only!

The alternative recommendation is to fit the Olympus unit. The Olympus unit is as old a design as the 'Magic Fly' itself, despite which it is only just starting to become eclipsed by some of the newer reduction devices. Maybe Chris Baker did his homework, and got it right, right from the start. In the Olympus, MFA have gone for a belt and pulley drive for various good technical reasons. In fact a toothed belt is used, running, of course, on toothed pulleys. The main drive shaft is of 1/4in diameter, resulting in the ability to use 'standard' propellers with a 1/4in hole in the hub. The front end of this shaft is supported in a ball race whilst the rear end runs in the glass filled nylon of the main moulding. This main moulding contains the pick up points (slotted!) for the motor, and has 'beam' type lugs more usually associated with diesels and glow motors.

The advantages are obvious, in that such a motor/reduction system can now be dropped straight into any other model having conventional hardwood bearers. Adjusting the tension of the toothed drive belt can be a bit hit and miss at first, for it is here that such a system exhibits its greatest power loss. In practice, the belt is usually less lossy if allowed to run fairly loose. Too tight will increase losses and reduce propeller rpm Surprisingly, a bit of 'freehand' adjustment will soon get it right and this is one area where access to a tachometer is a good thing.

Finishing and flying: Covering a model such as this is always a matter of choices, but it was felt that many would opt for Solarfilm and, therefore, so did we. Covering round the tip plates is possible with care but, for speed, we painted ours with Solarlac. The all-up weight came out at 2-1/2 lbs which is considerably lighter than my Mk 1 (which has 8 cells and a foam wing!). Balance was in the correct place with the flight battery in its box and flight tests became something of an anti-climax.

The 'Magic Fly' is a smooth and aerobatic model, well suited to the flyer wishing to try his hand at electric aerobatics. Rolls and loops are crisp with only a small amount of 'down' needed to ensure level inverted flight. Engine off performance is more than adequate (although the 'Magic Fly' is no thermal soarer!) and quite long 'stretched' flights have been obtained using the motor switch. Average flights of around 4-1/2 to 5-1/2 minutes when pulling high G, close-to-the-floor manoeuvres have expanded by around about a minute, as both the motor and battery became 'run in', and stretched flights of 15 minutes are quite within reach.

So, for all its age, the 'Magic Fly' has taken the update into the '80s technology in its stride and should live to see another decade out. Who knows, maybe in 1999 I'll be reviewing the 'Magic Fly' Mk3." 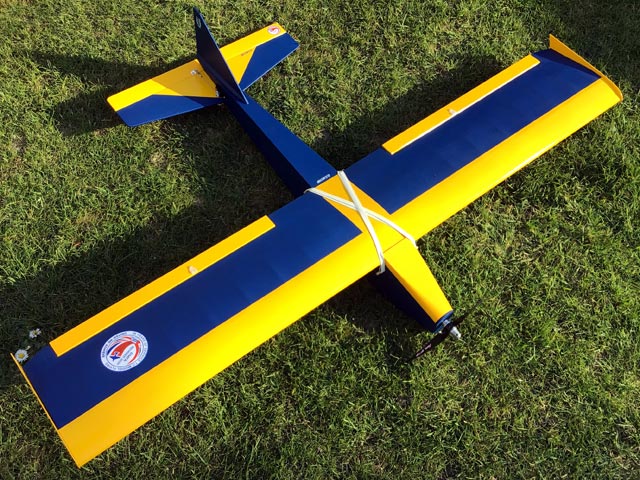