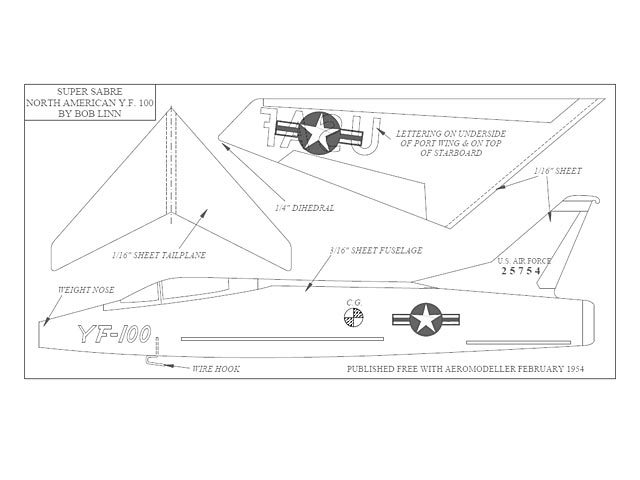 Quote: "Straight from the North American factory comes this profile glider of the World's fastest fighter.

LONG before official release of information on this transonic fighter was allowed by US authorities, Bob Linn made up his mind that here was the ideal subject for a scale profile glider. The Super Sabre was known as the Sabre 45 then, by virtue of its 45 angle of wing sweep, and on the very first test flight, this latest fighter, now pouring of production lines at the rate of over 50 per month, exceeded the speed of sound. Passed as operational, the F.100 becomes the first fighter in service, capable of supersonic level flight.

Bob Linn pressed for release of his glider drawings as soon as the first photo of the YF-100 was seen in the American national press, and full co-operation with the factory information department enables us to present them with proper official sanction.

Construction is simple, and providing the wing and tail slots are cut accurately, no undue trouble should present itself, even for the raw beginner. Add weight ballast to the nose to bring the CG, hook up a length of four 1/24 rubber strands, and catapult off at a slight angle. You'll be surprised at the speed and glide of this swept wing model, and if you can manage to wear a shirt like Bob Linn's, you'll probably surprise your clubmates as well!"

This is a re-drawn plan in vector format. 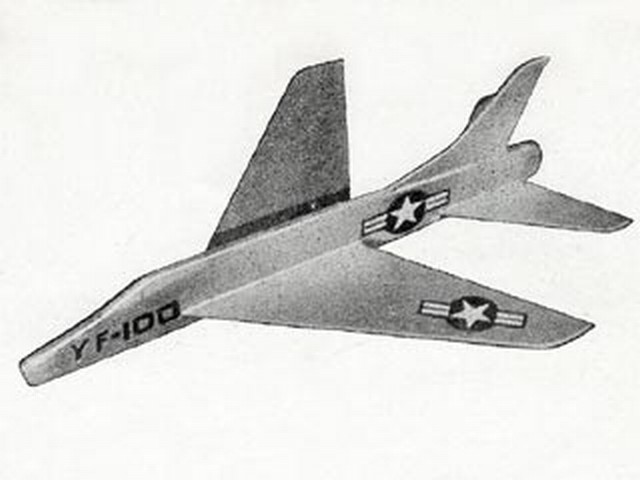