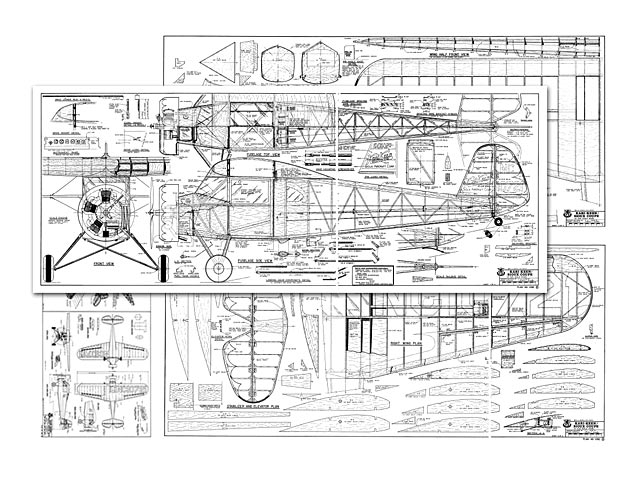 Quote: "It was while browsing through a pile of old Sport Aviation magazines (the monthly one issued by the Experimental Aircraft Association of America) given to me by a good friend, that I was suddenly confronted by this Kari Keen. It fairly oozed with character (to me anyway) one of many born in a bygone age of free and easy flying - long gone now of course, but it must have been marvelous. Anyway, enough of the melodrama. I felt that I had to build a model of it.

My first priority was a 3-view: but having tried the owner of the Kari Keen, the EAA library the Smithsonian Institute and countless friends both here and in the USA with good private libraries, I drew a complete blank. In desperation, I actually drew up my own from the information that I had, dimensions, and many photos in Sport Aviation magazine (Nov 1977). The owner of the Kari Keen, Forest Lovely, was kind enough to correct them for me, using the full size aircraft as a reference. The results were very good, so I went ahead with the project.

The aircraft was one of about 30 built between 1929 and 1931 powered by a Warner Scarab Junior of 90 hp, and the owner says it was, as far as he knows, the only one to have been built with a cowl they call a 'Speed Ring'. If you fancy building this really rare golden era aircraft, we can make a start with the fuselage.

Fuselage: First cut the formers and firewall from ply as shown. If you want to make formers 3 and 4 in one piece from 1/4 ply, do so but it is wasteful, and not really neeessary. Cut the landing gear mounting plates from either 1/8 or 3/32 dural, and bolt in place as shown. Make the fuselage sides. Due to the abrupt bends you must splice the longerons where shown, make a good joint here to ensure adequate strength, but do be sure to use hardwood where indicated.

The structure is quite conventional and should not present any problems. When joining the sides together using formers 3 and 4, note the reinforcements: these are necessary for the integrity of the fuselatge. Drill the firewall to suit your engine, and position the tank shelf so that the tank height is correct relative to the engine carburetor. Finish the fuselage according to the plan, and proceed with the tail unit

Tail: This is very straightforward should not pose any problems. Just be sure to use the right material as shown on the plan: be sure to set the angle the elevator horn correctly when joining the elevators together. The outlines of the rudder and elevators are made from laminations of either 1/16 or 1/32 hardwood. Decide on what you intend to use, and measure how thick they will be (about is okay). Place a series of pins around what will be the inside of the curve. Use a white glue to laminate the pieces, and while still wet, gently wrap it around the pins, inserting pins on the outside as you go, and allow to set. The wing tips are made in the aine way. This method is very light and strong.

Wing: The wing is made in two halves for convenience. Cut out the balsa and ply ribs to drawing, and make the notching jig from 1/16 ply. Make the rib to be notched and lay the jig on the top of the rib, with the 1/16 ply stop against the nose of the rib. The appropriate center of the rib nose is in line with the arrow, and the trailing edge is in line with the sloping rear edge of the jig. The notches can now be cut to the correct depth depending on the rib being notched. Cut all the notches for the spars, note that they are double depth at the root ribs, also that ribs 5 to 10 inclusive are partly cut through at the chain lines for later fitting or the aileron and false spars.

The wing has no dihedral on top, only on the underside due to the thinning of the wing out towards the tip. Because of this, when building the wing, the ribs must all lean towards the tip (the angle is shown on the plan). Lay down the bottom rear and bottom front spars, having made them double thickness where shown, and trimmed to the underside angle at the roots. Glue all the ribs in place, but not the 1/8 ply center root rib; allow to set. Next, gently lift the front spar oil the plan and insert a piece of 1/4 x 1/4 just to support it. Pin the bottom of the trailing edge in place, and glue ribs to it. Chartifer the top of the trailing edge and glue that in place. Build out the trailing edge and cut it at the centerline. Also cut the bottom spars, but leave the top spars for the moment. Lift the wing from the plan, and repeat for the other wing. The tips can now be fitted and glued in place. Carefully cut the ribs through completely where they were partly cut before.

The false spar and aileron spars are now glued in and gussetted where shown. Glue the vertical grain webbing in place at this time. Turn your attention to the roots of the wing. The tip spars and leading edge should now he cut so that they butt up correctly with the top of the front spars flat (no dihedral or anhedral on this spar). The 1/8 ply root (centerline) ribs can then be glued in place. Take your time for this operation and get it right. Do not fit the joining tubes yet. Cover the bottom of the leading edge first and allow to set. Next cover the top of the leading edge using a slow setting white glue and pin or tape in place, and, while still wet, lay the wing over the plan on a flat surface with no warps..." 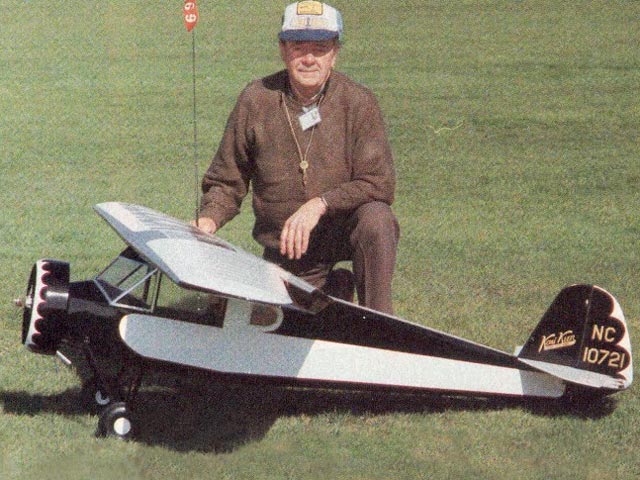 I was going to print this plan, but on close inspection it seems the 4 sheets do not seem to be the same scaling. Example, former 3 on sheet 2 is much smaller than on the side view, as are all the others. Are you able to calculate the discrepancy and make corrections?
PM - 31/03/2018
Ok, thanks, will check this.
SteveWMD - 31/03/2018
Add a comment