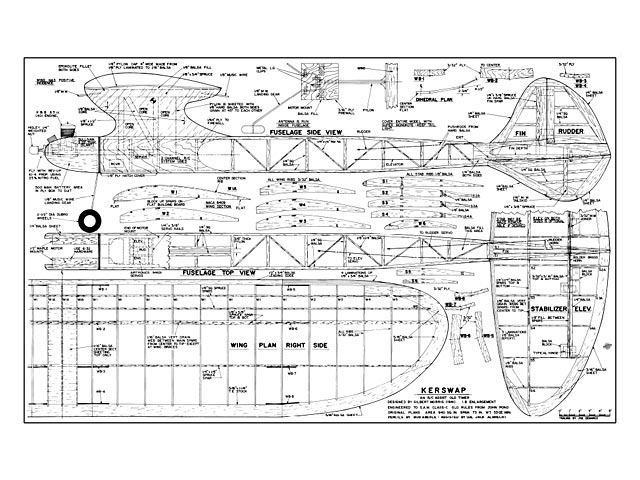 Kerswap. R/C Assist old-timer model. This is a later enlarged and updated version of the original 1941 design.

This time around I decided to try an R/C old timer. I had wanted to do one of these for some time. As always I did a lot of research before selecting a specific approach. With old timers you won't actually be designing an original model. The SAM rules, for example, classify old timer type models as those that were either kitted or had plans published prior to December 31, 1942. I was fortunate enough to receive a lot of good advice on this model from my long time friend and fellow AMA R/C Frequency Committee member, Col. (USA retired) Jack Albrecht of Oceanside CA. Jack has been actively flying and competing in old timer events throughout the entire west coast of the US for quite a few years. He flies all classes, primarily with converted ignition engines, which earns him the advantage of a longer engine run.

I asked Jack for a recommendation of a more unique old timer which, hopefully, had hot been published in recent years. His final suggestion was a not too well known model called the Kerswap which was designed by a Gilbert Morris, back in 1941. Jack has already built several Kerswap's for class A, B and C old timer categories. They had proved consistent winners for him. Other west coast modelers were jumping on the band wagon, building various size Kerswap's, but none (as of December 1984) had actually published an updated R/C version.

With this background in mind I set out to design and build my own 'East coast' version of the Kerswap. The starting paint for any old timer model is to obtain a copy of the original plans. The best may to do this is to use John Pond's list of 'Old timers and Post War Plans' (John Pond Pl. Service, PO Box 3215, San Jose, CA 95156). The Kerswap plans were identified as his catalog no. 45B4, selling for $4.00 plus 20% for postage and handling. On arrival I found that the original Kerswap was extremely small with a 42 inch span, 288 square inch wing area and yet surprisingly powered by an O&R .19 ignition engine. The thing that I liked the most about the Kerswap was its long tail moment arm, pylon wing mount, and comparatively large stab area, which permits a further aft (than usual) C.G. location. In fact, studying the original plans I felt like I was looking at a Paul Gilliam Civy Boy (oz5500) which didn't make the modeling scene until the early 50's. I flew Civy Boy with great success as an active free flighter in the late 50's and early 60's. What amazed me is that here, in this one design, was a model that had clearly been about 10 years or more ahead of its time. In many ways it led the way for the long tail moment, pylon wing mount free flights of the 1950's and on.

Next big choice was the actual size of the model. Obviously, the 42 inch span original version was too small for my purposes. I might add, however, that just about the time my Kerswap was completed, an article appeared in the November 1985 Model Builder, written by Bob Isaacks. It was a 1/2A version of the Kerswap (oz75). In fact, Bob actually used the original 42 inch model layout for his .049 powered version, with considerable modification to the structure, of course. This is an excellent article with some interesting back-ground information on the original design. If you are serious about building a Kerswap of your own, this article is must reading.

Getting back to my choice of size, I finally decided on a large Class C version. The SAM rules classify an engine displacement range of .30 to .61 cubic inch for Class C. Their rules also call for a minimum of 225 square inches of wing area for every .10 cubic inch of engine displacement. At Jack's suggestion I settled on a 40 size glow engine so the required wing area worked out to a minimum of 900 square inches.

With the basic size decided I finally got down to the drawing board. Since the rules call for the overall outline being the same as the original 1941 design, your only real flexibility is in the selection of the structure itself. The key idea being to make it as strong as possible, yet also as light as possible. My final Kerswap enlargement ended up at 940 square inches of wing area with a span of 73 inches. For that area the minimum legal weight worked out to 53 ounces, which I found out later is almost impossible to attain..."

Kerswap I built from Aberle plan obtained from you [more pics 005]. It's not an easy build, but it flies great and is now my favorite of 7 or 8 old timers I've built ... most from plans acquired on Outerzone.
DWartel - 08/07/2019
Add a comment