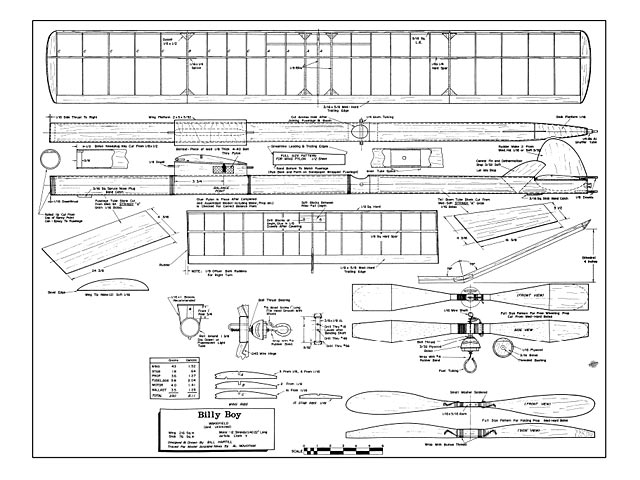 Quote: "Free Flight modeling has the earliest of beginnings, tracing back to before the Wright Brothers. The wide spread interest in Free Flight modeling led to the organization of sporting contests on an international scale. In 1927 Lord Wakefield of England presented the SMAE (Society of Model Aircraft Engineers) a cup designed and executed in Sterling by one of the most famous English silversmiths of the day. The Wakefield Cup has been competed since then by rubber-powered free flight models conforming to rules set by the Federation Areonautique Internationale.

A rich heritage of spirited Wakefield competition has been built up over the years. Why not, join the fun? And Billy Boy can help you get started.

This Wakefield was designed for Russell Hartill who built the ship (before his 9th birthday) and took first place in Wakefield and 2nd place in Unlimited Rubber at the '64 Dallas Nats. Although special thought was given to avoiding difficult construction, proven and modern design features have been used.

The rolled tube fuselage is the modern look and actually is easier to make than the built up kind (according to Russell). Three-panel, single spar wing was inspired by expert, Bob Hatschek. Clark Y airfoil sections are easy to build and are more efficient than is generally realized. The Clark Y was developed by a MIT professor in the early 1920's, and has been one of the most widely used (Spirit of St. Louis for example). The free-wheeling prop is simpler to build than a folder and tends to slow down both the climb and glide, making adjustments easier. Shallower climb is due to the higher pitch. Free-wheeling prop acts like a flywheel smoothing out stalls and bumps.

The more experienced modeler can use the alternate folding prop design for a little better performance. We have no intention claiming that this model has won every contest entered or that it is a perfect design, in fact like all models, some trouble spots can be pointed out.

The rudders get broken easily, the free-wheeling prop gets beat-up on landing, and the tissue covering gets full of holes. On the other hand it is surprising how much a beating it can take and still turn in good flights for newly converted Wakefield fans! Although Billy Boy was originally designed and flown on 50 grams of rubber, changes have been made and the plans shown here are for the new 40 gram rules..." 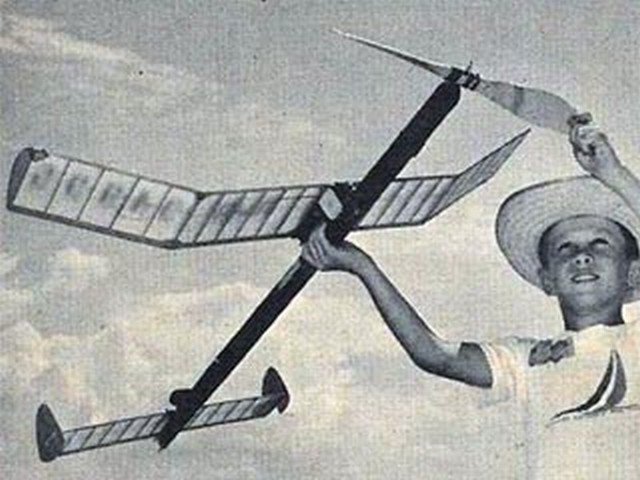