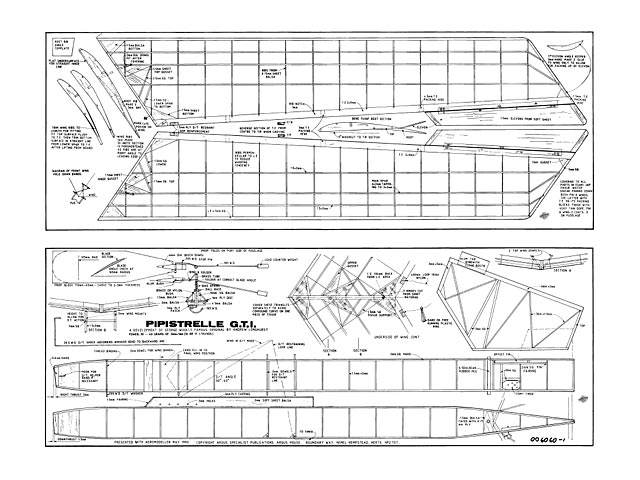 A development of George Woolls famous original, by Andrew Longhurst.

IF you recall my article about the Terry 1 (oz3282) tailless vintage model (October 1987) you will be surprised to learn that this funny old model with its meandering climb and terminal glide did not put me off tailless models for life.

In fact, my obsession with these freaky but inspiring models continued apace. Many were the flying wings that came and flew away. I learned that tailless models are very like their vintage brethren. That is, they can be divided into those that want to fly and those that don't.

Any amount of trimming applied to the latter group is a waste of time. Even tailless supremo John Pool has failed to persuade one American design to fly in spite of thirty years experience in this field.

Cheer up: But believe it or not there are flying wings that love to fly and are no more difficult to trim than a decent conventional model. Pipistrelle is one of them (plans are available from APS as MA 145, or from Terry Rose at 35 Old Orchard, Harlow, CM18 6YG). When I first built this classic George Woolls beauty I could not believe its stability. It just put all the other tailless models I had built in the shade and was as easy to trim and fly as your run-of-the-mill vintage lightweight.

Flights averaged ninety seconds. Even with this modest performance I was able to place second and third in a couple of competitions during 1989. The question therefore arose as to how the performance could be extended to two-minutes-plus. The answer obviously lay in the glide slope.

Whereas the Pipistrelle would hop on a passing riser with alacrity, it wouldn't glide into the next county unless you launched it whilst standing on the border. There was obviously a slight inefficiency somewhere because as one moved the CG back so it would cease scurrying about the sky in its usual purposeful fashion and would descend in or semi stalled state rather like a gently D/Td, conventional model.

I concluded that the wing was not working very efficiently - and that the cause was excessive washout (specified at 10 degrees). I also felt that the fuselage length (28 inches) really needed a bigger wing. But the thing I liked least was

What happens: A swept wing has the problem that the outer bits are subjected to an airflow slightly bent inwards by the pressure gradient. The tips are therefore operating a greater thickness and camber than the bit in the middle. The result is a tip-dropping, tail sliding, non-recovering stall - unless one reverts to one of a number of dodges, of which washout is the most popular.

The trouble is that in covering a convention-ally twisted wing with tissue, one involves oneself in a two dimensional curve and the result is a warp that varies with humidity. To eliminate this, the Pipistrelle GTI featured here incorporates a construction technique pio-neered by CA Rippon with his George (a 1941 Flight Cup Model) whereby one manufactures a complete set of identical ribs and then trims them away at the rear to fit each station on a trailing edge which is packed up in stages above the building board.

Because the wing is tapered, the result is five degrees of washout but no twist in the tissue, and hence no locked-in stress. There is another advantage in that the section changes from undercambered at the centre to flat-undersurface at the tip. This has an effect very like the flaps of a control line stunt model whereby the drooped TE of the Bene 7406F at the centre has an elevating effect and reduces the degree of negative elevon required for a given CG position..." 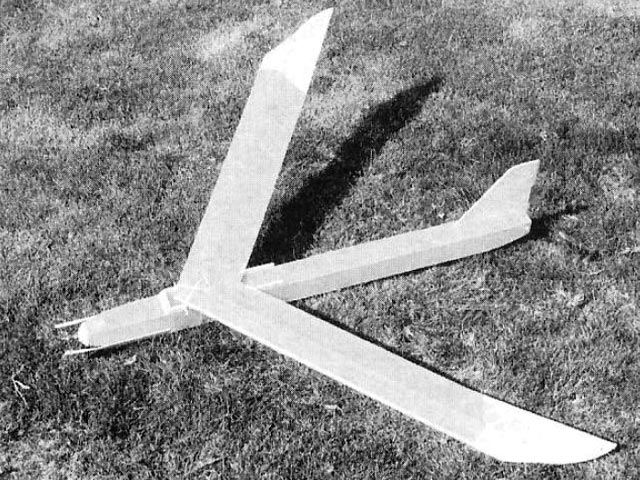