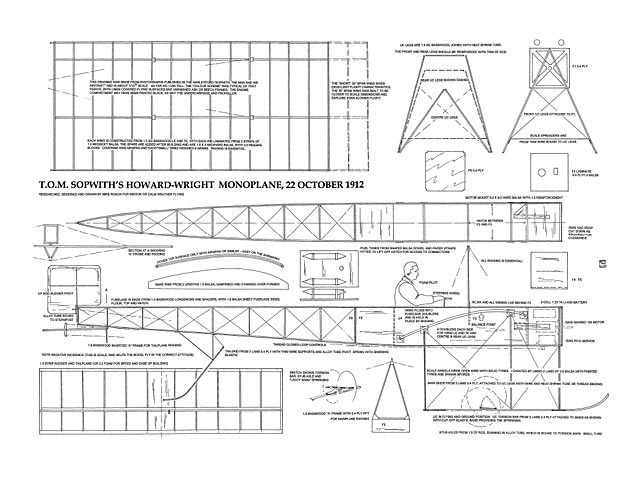 Quote: "Sopwith learned to fly in 1912 when he was 22. Actually, as related in Chapter One of 'Sopwith – the Man and His Aircraft' he visited Brooklands during October and flew two circuits as a passenger in a Henry Farman biplane: shortly afterwards he bought a Howard-Wright monoplane for £630 and on the 22nd flew himself into a crash (caused by over controlling). Undeterred, he had the machine repaired and flew his first controlled solo flight on 4th November. There are three pictures of him in this spindly-looking monoplane at Brooklands, two on the ground and one, a wonderful photograph, of the plane in the air with him leaning forward but relaxed, a natural pilot. The eponymous Mr Howard-Wright was no relation to the more famous brothers, but an engineer and designer living in London close to Sopwith. He also made a biplane in which Sopwith captured the British endurance record later in the year.

Anyway, I decided that a committed Sopwith-ophile just had to make a model of this little-known aircraft, and it fitted in with my Autumn building programme for the indoor flying season to come. It is a large model, but flies exceptionally well on the now standard GWS 'A' geared 150 motor and associated hardware that comes with the Indoor Stick. At one-third throttle it will fly slow, graceful circuits and if you have a large hall or a hard surface out of doors on a calm day, it can take off and chunter round, do the odd touch and go, even a chandelle or a rather hesitant stall turn for all of 30 minutes or so if you use one of the little lithium ion batteries. Unlikely though it might seem, it would suit a beginner to indoor flying rather better than the Stick, because it is so light, slow flying and controllable – but it doesn’t bounce quite as well!

The design is typical of its time, with an open fuselage, cambered wings, a heavy engine in a very short nose and a blizzard of struts and bracing wires. Having worked with balsa open frames on my 1914 version of the Sopwith Tabloid prototype recently, I thought that 1/16th square basswood might give a more scale-looking structure for fuselage, wings and undercarriage. The short nose meant that all the RC gear would have to be concentrated very close to the front. A Lithium Ion twin-pack and the lightest GWS hardware weigh over 100 grams, but the 32in span model only weighs about 60 grams, and I did not buy special wood or build particularly lightly. However, such a delicate structure must be fully braced or it will immediately fold up during your first take-off.

The fuselage is very a simple box structure. Anyone who has built a Keil Kraft Cub (oz1349) will find themselves at home here. Build both sides from the basswood strip and 1/16th balsa and join them with F2, F3 and F4. Prop up the assembly over the plan and add the cross-bracing, first to the top and then the bottom of the rear fuselage, and pull in the sternpost when all is rock solid. I added the thread bracing in stages, because although it is a tedious job it is essential, otherwise all that basswood will just spring apart after your first less-than-perfect landing. Don’t ask how I know..." 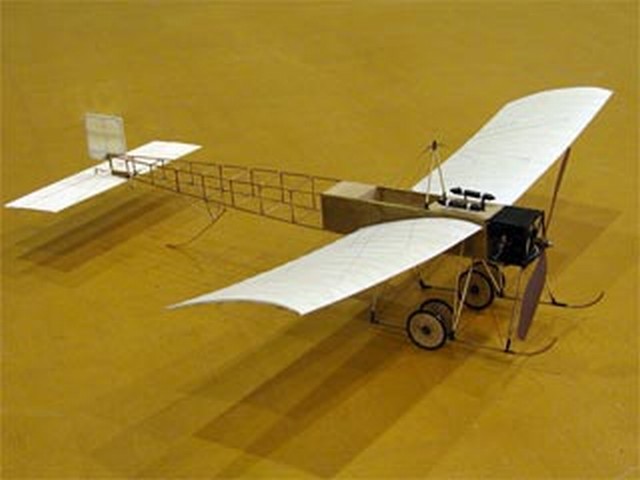