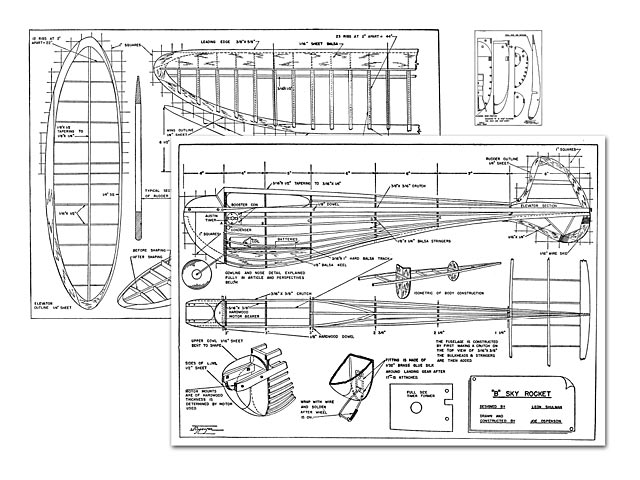 Quote: "A champion designer and flyer tells how you can duplicate his consistently prize winning Class B gas model. It's worth the effort.

LAST YEAR, at almost every contest throughout the country Class A Sky-Rocket (oz7435) models were zooming around the skies, and totaling many excellent flights. In the Class A Sky-Rocket fleet, another Bantam powered Sky-Rocket of larger dimensions zoomed and glided to greater heights than its baby brothers. This new ship, the Super Sky-Rocket B, powered by any class A or B engine, proved to be the best in the Sky-Rocket series, because of the more efficient airfoil and the better proportions for the power used.

The new Super Sky-Rocket, built by one of the Kresge Aero Club members, won for him many prizes. Misfortune and bad luck, however, seemed to curse Joe Ospensen, its builder, because every contest he took it to, it flew out of sight for the day. The lowest time of these flights was over 10 minutes and the longest was 49 minutes on a 21 second motor-run-timer!

On one hot summer day, at a Sky-Scraper Club outing, the ship flew out of sight on an 18 second motor run, for 1 hour and 10 minutes. Two days later we received a letter from the captain of a fishing boat telling us that the ship was fished out of the Long Island Sound off Fire Island and according to the boat's log, was picked up at 10 minutes after 3 o'clock, and the model was launched at a few minutes before 12 o'clock that day. Aside from this exceptional flight, at the National Meet it turned in a flight of over 4 minutes on a 15 second engine run.

Since all the plans shown for the Sky-Rocket B are not full size, they will have to be drawn to its proper dimensions. By all means follow all the dimensions carefully. This is easily done by using an ordinary rule and a straight edge. Brown wrapping paper is about the best paper for the model builders to draw his working plans on, since it is cheap, strong and takes pencil marks and erases easily. Be sure to be careful when the dimensions are concerned, since the proportions may be changed. The fuselage is not difficult to draw, since the full size formers are given. The stabilizer has an elliptical outline and rudder has a simple curve.

Trace the fuselage formers onto the 3/16 sheet by 3in medium stock balsa. The front bulkhead A is of 3/32 plywood. Only the first former A and the last former D have notches completely around the bulkhead circumference. The others are without any so that the stringers can be flowed onto the bulkheads smoothly. In building an airplane using this type of construction, the use of the eye as a guide seems to be more accurate than a rule.

The crutch is the first to be constructed on the ship since this is the foundation for the model. The crutch is made of 3/16in by 1/8in balsa and made to follow the dimensions on the plans. After the complete crutch has been made, the formers are added to their respective locations, using plenty of glue to hold them firmly in place. The keel is then made of 1/8 sheet balsa and is also glued firmly in place and allowed to set until hardened. The stringers are then added, one pair of opposite stringers at the same time, working from the nose to the tail..." 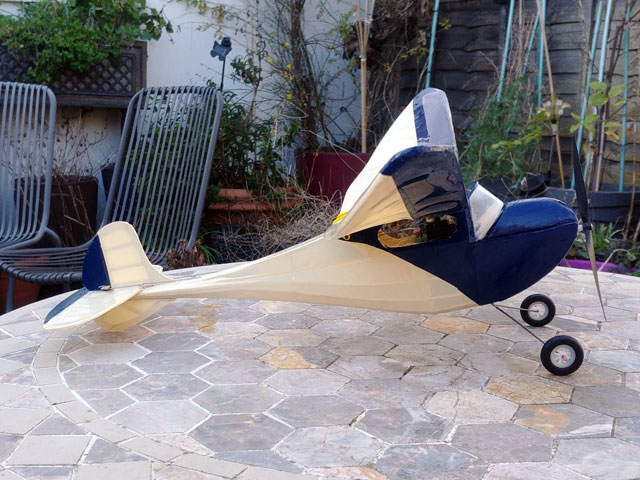 Here are a few pics of a scaled down variation of Leon Shulman's Sky Rocket B [model photo & more pics 006-008]. Wingspan 18", overall length 14", weight (without 1S battery) 71g (2.5ozs). RC is via an ares mini gamma brick (rudder elevator brushed esc. & 3 axis gyro.) The motor is a geared unit from the same plane with a 5" (by 3 pitch. My guess.) There is plenty of room up front for a choice of 1s batteries so I will be trying both the 150 and 300mah units since I seem to be able to get both to balance ok. My only slight concern is the wing profile where I might have misjudged the position of the wingtip trailing edges. Will give it a try before going back to the building board. Thanks for the amazing resource.
AnthonyRoberts - 06/02/2019
Add a comment