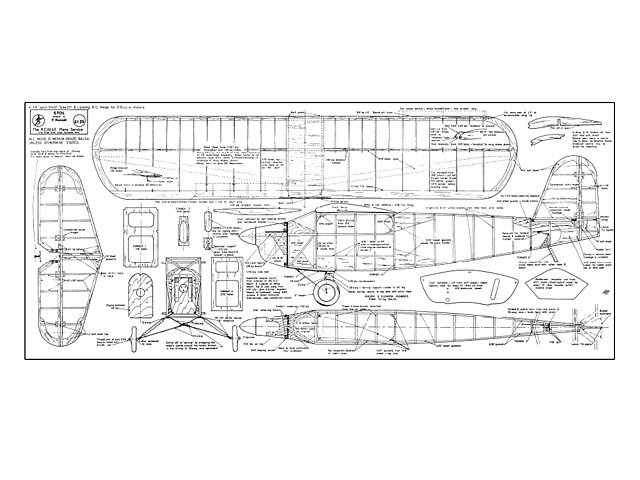 Quote: "Ancient and Modern - If you think this design looks as though it escaped from a 1939 issue of Model Airplane News, then you would be both right and wrong. It was in fact designed in 1972, but is a close relation of this writer's '242' free-flight of 1943, which was itself much inspired by Malcolm Abzug's S-4 Three foot gas model (oz8934) which appeared in the January 1939 issue of MAN.

But how did a 1972 design come to have that spidery olde worlde see-through structure, you inquire? Well it's a long story. You see, over the past few years, I have been getting increasingly fed up with having to motor ten or twenty miles to the airfield every time I wanted to fly. I do getting on for 30,000 miles a year in connection with my job, and gave up motoring for pleasure a long time ago. So what I wanted was a simple, rugged aeroplane that could be operated in and out of small fields and paddocks nearby. It just crossed my mind that I might even be able to operate from my own lawns, and so cut out the motor car as an essential aeromodelling tool. At the same time, a mere flying machine would lose its attraction in a very short time, so in addition to good 'short field' performance, the prospective design would have to be reasonably sprightly and be capable of at least some of the elementary aerobatic manoeuvres, loops, half-loops, rolls, half-rolls, inverted and since I like to play around with gadgetry like cameras, barographs, glider towing and so on, there had to be a reasonable 'stretch' potential.

But first things first. On every flight, the two manoeuvres that you are bound, without exception to perform, are take-off and landing. There are two ways of getting short field performance. The first is to build a simple, light aeroplane with a low wing loading and high power. The second is to build a 'normal' type acrobatic model and equip it with sophisticated high lift devices like multiple aero-increasing flaps, droop leading edges and so on. I decided to try, initially, at any rate, the 'simple' approach, limiting my high lift devices to a low wing loading and a 'high lift' wing section. In view of the abnormally low flying speed potential, very powerful controls were added to the specification, but ailerons were not used, as I was going bust for light weight and felt that with plenty of rudder power and the right amount of dihedral, adequate yaw/roll response could be achieved without the extra weight and complication of ailerons.

With my interest in 'Old Timer' engines and model aeroplanes, I suppose the antique structure was more or less inevitable, but there was a bit more to it than that. In spite of the apparently fragile structures, many of the old 'gas jobs' would take an incredible amount of abuse without damage - they had to because most of them were marginally stable and many flights ended in sickening full-power spirals into the ground. Damage, if any, was usually confined to the parts that actually hit the ground, ie nose and wing tips, and furthermore the tissue or silk covered structures were very easy to repair. Unquestionably, the strength/weight ratio was good. 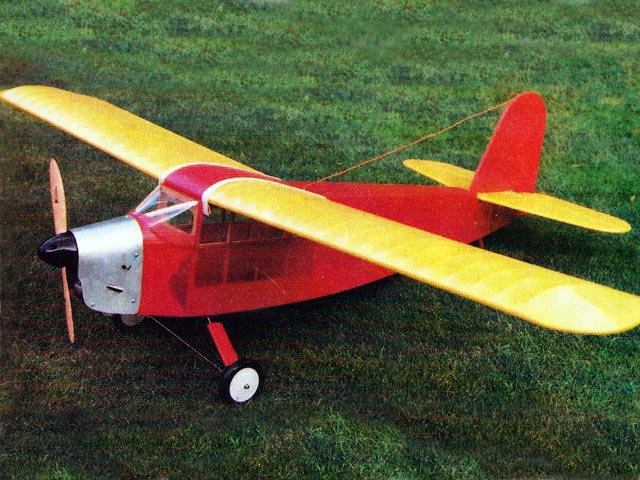 STOL was also published as a plan/construction article in the November 1974 issue of Model Airplane News too.
Pit - 16/03/2018
Thanks Pit. RFJ has very kindly shared that article with us too, as well as the two from RCME. I've added it as a supplementary file just now.
Mary - 16/03/2018
Here's an image of my #23 STOL from 1984 [more pics 009]. Built from RCME plan, span 48", W 1,6 Kg, OS.25, 6ch (aileron, elevator, esc, rudder, flaps, door for parachute dropping).
OweCarlson_Sweden - 16/03/2018
Added another picture of Owe Carlson's STOL [more pics 010].
Mary - 19/03/2018
There was a plan for STOL mk2 which had major alterations to the wing design. Wing ribs were flat on the underside, the ailerons were added, flaps were part of the trailing edge structure, and an extra wing panel was added to each side giving 150mm more wing span. I began this build many years ago and have recently returned to it. The plans have long gone, I have the mk1 plans, do you know if the STOL Mk 2 plans are available on line anywhere. I am in Melbourne Australia
Euan Nichol - 06/04/2020
Euan, I have the Mk 2 STOL plan filed away somewhere. I shall dig it out and when this strange world returns to some kind of normality I will submit it here.
Cody’s Neighour - 07/04/2020
Great stuff. Meanwhile, there is a thumbnail image of the MkII plan (wing has both ailerons and flaps) inside the supplement file called _article_RCME_2.
SteveWMD - 07/04/2020
More recent copies of the STOL plan from RCME /Sarik have been printed at 55 inch wingspan. Nobody knows when or why the printed copies changed, it just has! Worth checking before you build and arrange suitable power for the size.
kc - 05/11/2020
Dear Cody's Neighour, did you ever dig out your STOL Mill plan? As I'm looking to build a Mkll as a winter project.
Take care.
Phil - 11/09/2021
Add a comment