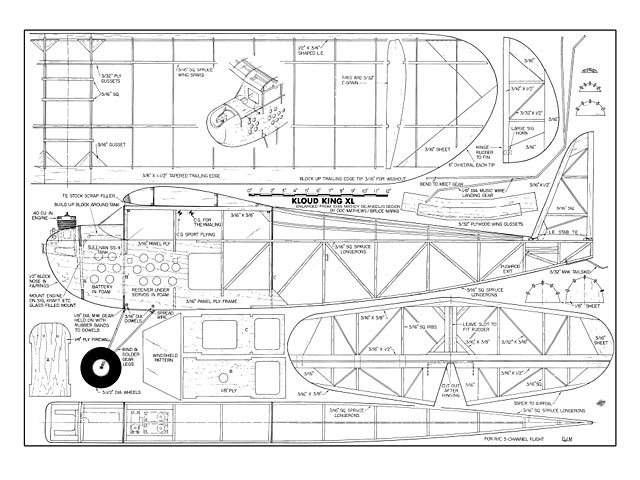 Quote: "This 1938 Mickey DeAngelis design has been enlarged and modernized for R/C assist to use .40 engines as per SAM rules. By Doc Mathews.

The current surge of interest in Radio Assisted Old Timer Free-Flight is of considerable delight to those who have been extolling the fun aspects of the hobby for several years.

The design presented in this article is an effort to further expand that surge to include the literally thousands of potential builders who own, or can obtain, a sport sized .40 engine. The immense popularity and availability of these engines is best illustrated by the fact that K&B's #8011 Sport .40 is the longest run in continuous production and the most owned engine in world history. To make this even more astounding, one must also recognize the popularity of .40's of other manufacture, both domestic and imported. Stangely, only a very few Old Timer model designs are of suitable size for a .40 powerplant. Under SAM rules a model used in competition must have 225 square inches of area for each .10 cubic inches of displacement. In other words, a .40 powerplant must have a model of 900 square inches or more. Conversely, the majority of designs from prior to December 31, 1941 (the SAM cut-off date) are much too large for optimum performance with a .40. As an example, the Cumulus (oz5363) and Miss America (oz5645) have well over 1100 squares.

This size-power disparity lead to the development of the Kloud King XL (XL is the Roman numeral for 40). My friend Bruce has been building and flying (more or less) a series of .40 sized trainers over the last two summers. Actually, to be more specific, he has been building and repairing a lot more than he's been flying. This increasingly frustrating chain of events has been in marked contrast to the low key get it out, strap on the wing, fire up, ride the thermal and land at my feet kind of thing I do. Bruce became increasingly more quizzical about our no winch or hi-start 'glider' activities and eventually was bitten by the Old Timer bug. He came to me asking what he could build for his old faithful K&B 8011, the only engine he owns. Having gone through the process of examining the majority of available prototypes, I advised him that those designs suitable for his powerplant were for the most part rather difficult to construct and were, frankly, possibly over his head in the skills required.

After several bull sessions on the subject Bruce mentioned one evening how nice it would be if Mickey DeAngellis had designed his Kloud King (oz5215) in a suitable size. As a hopeless plan scaler up or downer these words precipitated a dive for that old issue with my trust scale ruler. Sure enough, a little action with the calculator revealed that one could enlarge the original Kloud King to 900 squares with relative ease. Bruce's immediate enthusiasm prompted me to draw up a further simplified model, incorporating several additional refinements which were learned through trial and error with previous aircraft of this type. It was built up in remarkably short order by Bruce and was ready to fly in the Spring of 1979..."

Beehive Models Kloud King XL is a pre-built, nearly ready to cover, modified version of a design published in FM July 1980 (Plan CF-543). For those fliers with inadequate time or skills to scratch build, this concept may be a viable alternative in trying their hands at Old Timer R/C assist. Certainly, the open framework, 'stick and pieces' models can be attractive alternatives to the more conventional sport models. The undeniable beauty of these nostalgic throwbacks combined with their docile flying characteristics have made them remarkably popular with a large number of fliers.

The published design on which Beehive Models based this product was developed by this writer. I hasten to add I have no financial interest, nor am I receiving any compensation from the manufacturer. However, having originally designed and developed the model certainly places us in a rather odd position when evaluating the product.

Although I enlarged the XL from Mickey De Angelis' original 1937 drawings, an error crept in between my pencils and the draftsman's inks. The Kloud King nose outline is not accurate, nor is that of the rudder. Therefore, the Kloud King XL is not SAM legal! It really should not be allowed to compete in SAM events.

Otherwise, it is a splendid sport trainer. Frankly, the design would be hard pressed to compete effectively with the floaters such as the Dallaire or the Cabin Playboy anyway.

That the Kloud King XL is an excellent choice for those seeking a slow and gentle flier with thermalling capability is testified to by the large number of plan-built versions flying. I have received correspondence from builders from such diverse locations as New Zealand, Mexico, Canada, England and even Israel! The plan has been a very popular one for FM and with what, I think, is good reason.

Kit details: Beehive has altered the original construction to facilitate assembly on jigs using cyanoacrylate adhesives. The sub-assemblies are produced by ladies in the community, on a piece work basis in their homes. That is: one lady builds all the right wing panels with the jig and pre-cut parts in her kitchen, and so forth. Certainly a novel and well proven approach which produces excellent workmanship and quality.

The fuselage is nearly all balsa as opposed to the original design's extensive use of ply and spruce. Double laminated sections of 3/16 X 3/16 inch balsa are used for longerons rather than the original 3/16 square spruce. My particular sample contained several vertical and cross pieces of very light and soft balsa which I found to be awfully fragile.

The wing leading edge is square stock, set on edge, with cap strips running from it to the double sheet trailing edge. Spars are spruce. As shipped, the completed right and left panels are to be joined to a sheeted center section via a plywood brace which slides into a set of boxes which are joined with epoxy. All and all, this is a strong and light wing well suited to covering with MonoKote.

The empennage is manufactured of 1/4 inch strip and sheet balsa. Robart hinge points (large) are .supplied to fit into pre-drilled holes. A hardwood insert is used for the rudder horn and tail wheel steering tiller.

Landing gear is pre-bent and soldered 1/8 diameter music wire, and need only be screwed onto the ply fuselage bottom. Wheels (31/2 inches) and collars are not supplied. Wing hold down is via 1/4 inch diameter dowels running through ply reinforced holes in the cabin. Nose blocks are pre-shaped, sanded, and installed. A drain hole is even pre-cut in the bottom block! No motor mount is supplied as the engine chosen will dictate what size nylon motor mount is needed. A removable hatch windshield unit with clear plastic already installed is used for access to the battery and tank compartment.

Specifications: Kloud King XL spans 74 inches, chord is 13 inches and total wing area is approximately 900 square inches. A flat bottomed modified Clark Y airfoil is used. Fuselage length is 53 inches overall. With a radio compartment 12 inches long, 3 inches wide and 9 inches deep, needless to say it is roomy! The nose compartment is 31/2 inches long, 3 inches wide and 5 inches deep, a tank notch in the rear bulkhead does allow use of a six ounce tank with the battery under it.

Total weight should range from 4 to 5-1/2 pounds for a spectacularly low wing loading of 10 to 14 ounces per square foot. Recommended power plants are .25 to .40 cubic inches.

The product: All parts of our sample were band sawn, well sanded, nicely fitted and well glued. All one need do to be ready to fly the Kloud King XL is join the wings, install the motor and radio, screw on the landing gear, and cover..." 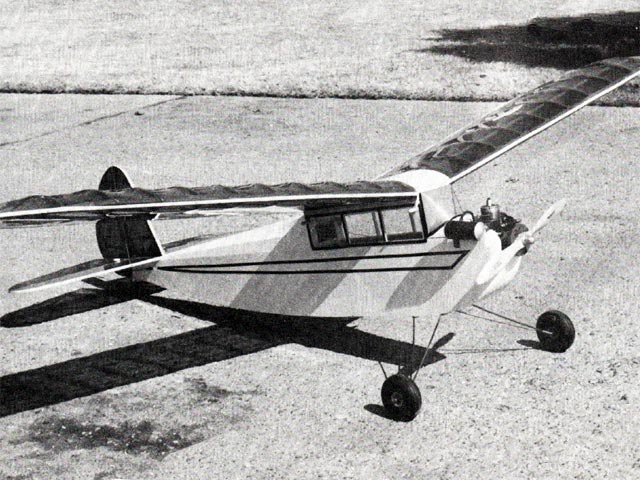 I built a Kloud King (OS Max 40 FS) from this plan in 2004 and it's still intact. Easy to build as everything is quite large. Flying is typical of a large three channel (i.e. no ailerons) aircraft with a ~5-6 inch dihedral which means its quite stodgy in the air in terms of reaction to stick inputs. Great for slow meandering around the sky taking advantage of thermal lift where present. Also, excellent plane on which to train beginners as it flies so slowly and literally hangs in the air. No model is impossible to crash, but this one comes pretty close!
Jonathan - 06/04/2020
Add a comment