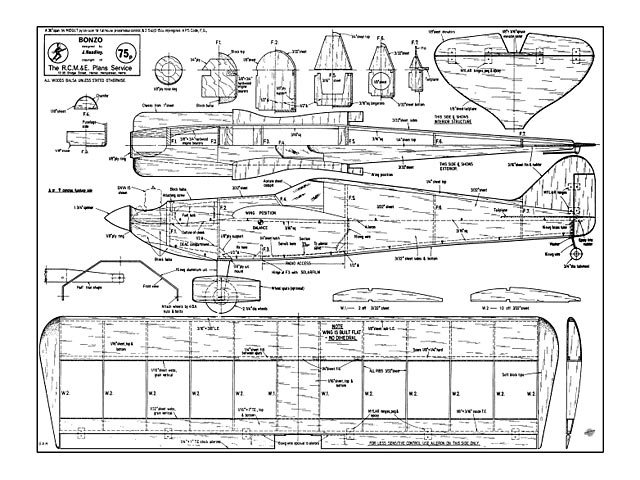 Quote: "ALTHOUGH the quarter-midget class of pylon racer was suggested about a couple of years ago, it seems only in the last six months that 'serious' racing has begun. The basic rules for this class call for a wing of at least 300 square inches area, and a stock .15 engine, with other requirements for fuselage cross sectional dimensions, and wing thickness.

These latter rules seem to vary from club to club, which is a nuisance if you are racing away from home, and find that you've got an illegal racer. However, there now seems to be sufficient interest in quarter-midget racers to demand a more standard set of rules, and hopefully these will be forthcoming shortly.

Meanwhile, the `Bonzo' presented here is based on the current Northrop Club rules, but it might be wise to check over the plans first, before beginning construction to make sure that it complies to your own version of the rules. While I've got your attention (I hope) I'd like to discuss the future of this class of model. Remember that basic-ally what we have is a low-cost sport model, flying fast enough to be exciting, but not as fast as the 'big boys'. As time goes along I foresee that there will be the usual demands for more speed, and a 'bending' of the rules to permit any engine/prop/fuel combination, etc, and 'then we'll be following the path of, say, Control Line Team Racing, which is now a caricature of the initial concept and only of interest to a few specialists. So let's not lose sight of the basic idea, sport racing for everyone, and not progress too quickly. I don't want to end up again with a garage full of unuseable models.

Construction of the model is very conventional, and has been kept as simple as possible for easy building, and speedy repairing. Let's start by making the wings. You'll need a couple of lengths of good 1/16in x 4in x 36in balsa to begin with. Trim a 3in slice from each of these for the centre-section sheeting, then cut both length-wise into a 3in slice and a 1in slice, for the leading and trailing edge pieces respectively. Build up the wings on a flat board so that a reasonably warp-free wing is obtained, as any warps will show up as excess drag. After the main wing structure is completed remove it from the board, add the wing tips..." 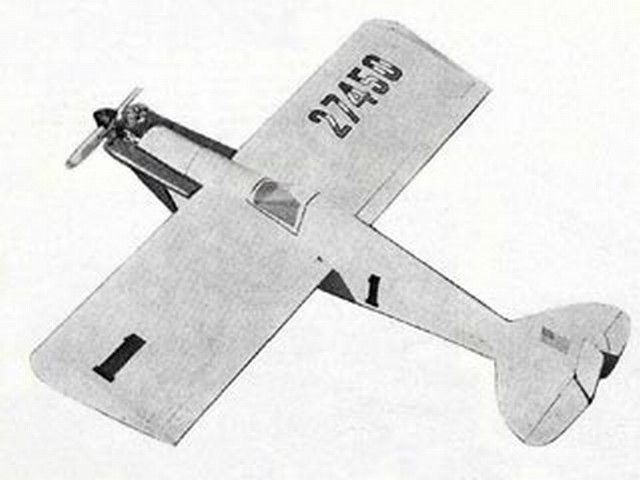