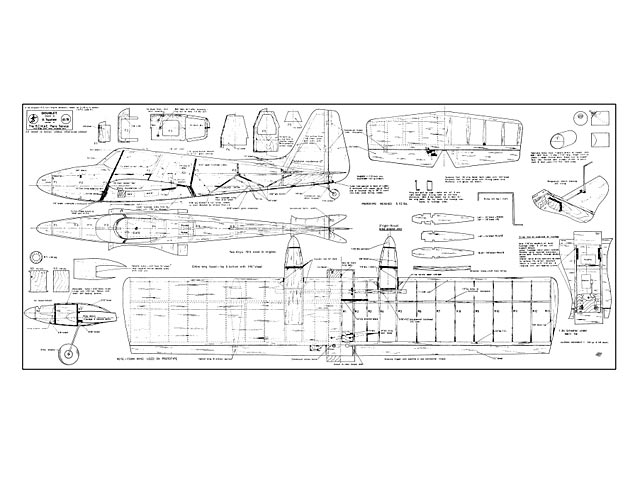 Quote: "AFTER spending some weeks looking around for a new project, I developed the urge to build a twin, and the sight of a large twin flying at Esher Club symposium last year finally spurred me on. I really wanted an acrobatic model, and, as there didn't appear to be a commercial plan available, I set out to design my own.

The basic aerodynamics are those of a conventional acrobatic single engined model, but with the two engines and a scalish fuselage. The resultant model is really satisfying to fly, being quite lively on the two 19's and it really dispels some of the fantasies put around about what will happen if one motor cuts!

Doublet will loop, bunt, roll, spin, and fly inverted as well as any single engined model of the same calibre, and that beautiful beat of the two motors, I find a real thrill. If a motor does cut, she will hold off with a little aileron and even climb slowly, so, if you feel you want to have a go, let's make a start.

Construction: This model is not intended for the beginner, rather a new adventure for the reasonably accomplished builders and flyers, so I will do my best to point out possible pitfalls in construction rather than provide a blow by blow, A to B method of construction.

The original model had a home-made foam wing covered in mahogany veneer with strengthening hardwood spars to carry the undercarriage and to stiffen the area by the nacelles in the positions shown on the plan, but a built up wing is shown should you prefer this type of construction. Join the two halves together using the two 1/4in plywood dihedral keepers, and web in between top and bottom spars at the two inner bays using 1/8in hard balsa, grain vertical. Use a wing jig if you have one, to preserve alignment, note that ribs 4 and 5 are cut off in front of the hardwood spars. Do remember to install the engine throttles, bow den cables-in-nylon tube, before covering. The prototype has a single cable connecting both engines, with the movement reversed on the port engine by a bellcrank in the nacelle. Keep the cable sweep as large as possible to retain freedom of movement and to minimise backlash. After covering, add the tips, and bandage the centre section with 3 in glassfibre tape which is quite adequate.

Cut out the nacelle sides to drawing, and stick the 1/32 ply doublers to the balsa sides making sure that you make two of each hand. I use Dunlop Thixofix as an adhesive, it's quick and does not warp the wood. Cut out the two ply formers for each nacelle and assemble both nacelles on to the wing using plenty of white glue. Ensure that there is 3° to 4° right thrust on the starboard engine only, true everything up and set aside to dry.

Fuselage: It is important to keep the tail end of this model as light as possible, so select your wood carefully. Cut out the fuselage sides from medium soft 3/32 balsa, and the 1/16 and 1/32 ply doublers. Thixofix these together, and add the 1/4 sq longerons and the 1/4 x 1/8 stiffeners. Whilst these are drying, cut out the formers. Add the 1/4 in balsa treblers to the sides using Thixofix again, clean up the profiles and join them together using formers 3 and 5 to start with. Allow to set. At this stage you can build the fin and tailplane on the plan, these need no explanation, but once more select your wood carefully to keep it light.

Pull the rear of the fuselage together, glue. add the remaining formers taking care to keep everything true. Fill in with 1/4 in sheet where shown in front of the tailplane, and add the 3/32 upper sheeting at the rear end. Check the size of the fuselage to the plan shape of the 3/8 sheet decking..." 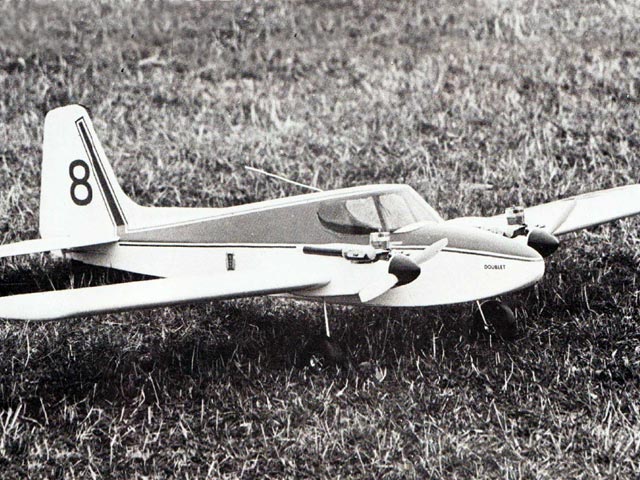