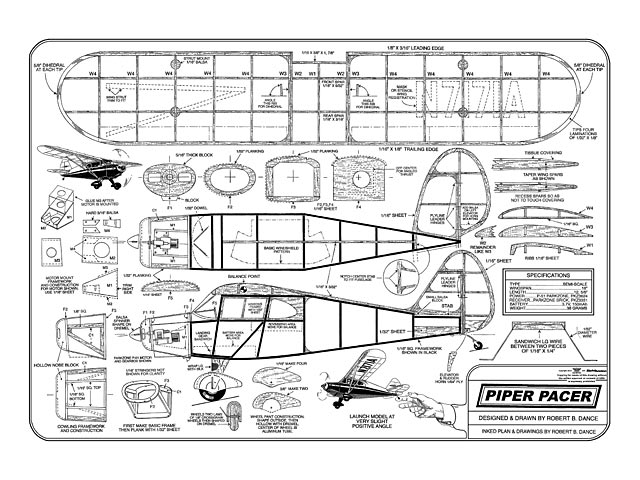 This plan is a free download available from the Model Aviation site at http://www.modelaviation.com/piperpacer where it appears along with the full build text and some great photos.

Quote: "The full-scale Piper Pacer appeared in 1949 and falls into the Short Wing Pipers category which started with the Piper Vagabond in 1948, and continued with the Clipper, Pacer, Tri-Pacer, and Colt. They are referred to as Short Wings because Piper deleted three feet from root of the basic Cub wing, giving these aircraft a 29.3-foot wingspan.

The Pacer was the most handsome of these Short Wings, although the Vagabond has the cute charisma of a scaled-up model airplane. I was 15 years old when the Pacer was introduced, and I have built several versions of the Vagabond, Pacer, and Tri-Pacer. They are perfect subjects for a fine-flying model, perhaps because of their low-aspect-ratio wing, large stabilizer, and force arrangement.

The Piper Pacer with its 18-inch wingspan, is the smallest Short Wing Piper I have built and it is the result of buying a ParkZone Ember. I was so impressed by the Ember’s amazing micro-components that I started thinking of using them in a small Scale model similar to the old Comet models I built as a boy in the 1940s.

This Pacer’s construction is similar to those Comets and to the small models designed by Walt Mooney during the 1950s and 1960s, which were offered as full-size plans in model magazines. Those who have built stick-and-tissue models should have no problem building this Pacer. Builders with a creative bent might want to convert it to a rubber-powered FF model.

The Pacer has large, balanced elevator and rudder areas, and I would recommend dual rates to lessen the throw on these surfaces. Otherwise, the model may be sensitive to control. I did not use dual rates, but to lessen the throw, I made the control horns longer than normal..."

This plan is a free download from the Model Aviation site. 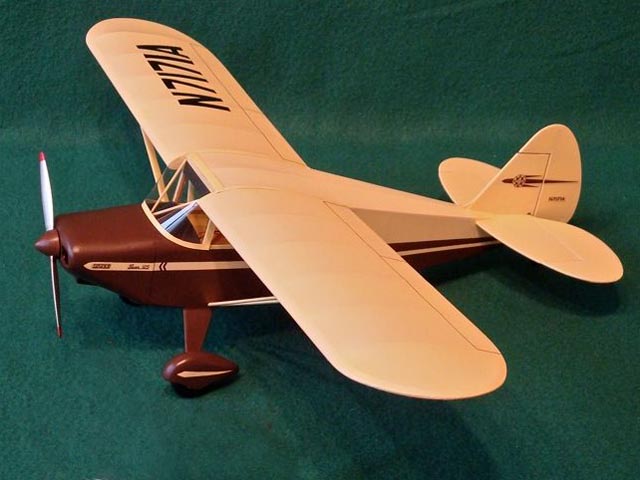