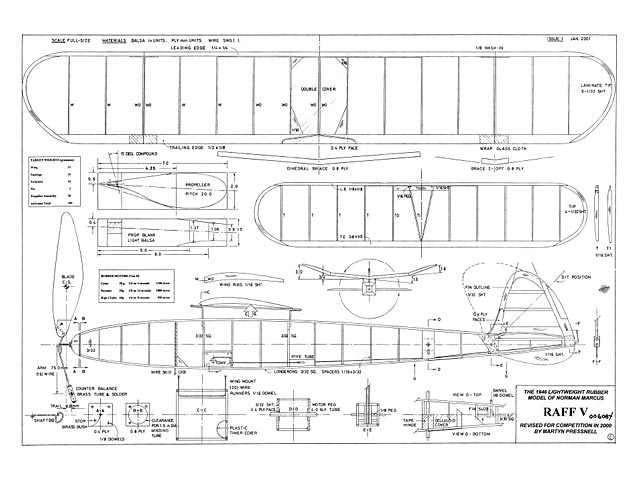 Quote: "THE original model (with a large fuselage to aid o.o.s.. flight) was very successful, but it was found that the fuselage produced too much drag in still air, so 'Ralf'' was designed. Raff I was second in Blackheath's 1945 Gala, and the following week flew o.o.s. in a club competition on its first flight. Raff II was built around Christmas 1945, and it consistently clocked 3 mins plus during the following months. Finally, the model flew o.o.s. 10 mins. 38 secs. in the Gamage Cup.

Raff III was finished a few days before the ME No. 2 Cup and it needed little trimming. On the day it clocked 87 secs, 155-5 secs, and 184 secs respectively - it placed sixth. This model was lost (dethermaliser failed) a week before Northern Heights Gala. Raff III also placed second in the LAC rubber trials with an aggregate of 450 secs.

A new model was built for the Croydon Clarke Trophy (open rubber). The first flight was 172 secs. (dethermaliser), the second 338.5 secs. (dethermaliser), and the third, 290 secs, when it was lost behind some houses and not returned. The latest model, Raft V, is still in my possession. It clocked over 2 mins, on each of its flights at the St. Albans Gala, the dethermaliser working each flight. Mr Anastasiou built a Raff V for his first rubber model and with it he won the open rubber at St. Albans with an aggregate of over 11 mins for two flights.

Well, that is the history of the model, and I would like to add that with good rubber and full turns, it will turn in consistently flights of over 3 mins in still air.

Fuselage. This is of the square slabsider type. It is built in the normal manner. The parasol is 1/16in by 1/8in hard balsa, backed with 24 gauge wire for strength. All the gussets are of 1/16 sheet.

Wings. The soft 1/4in sq balsa is carved to shape and then backed with 1mm ply for about 8 ins at the centre. The section has a slight reflex which helps to hold a stall. The dihedral keepers are 1 mm. ply on the leading edge and 1/8in sheet on the trailing edge..." 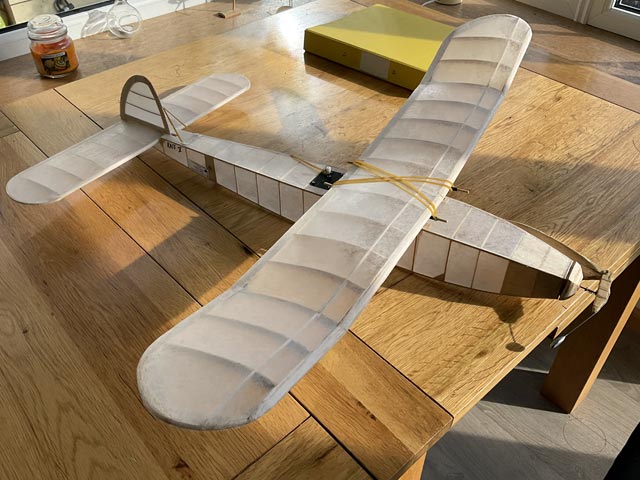