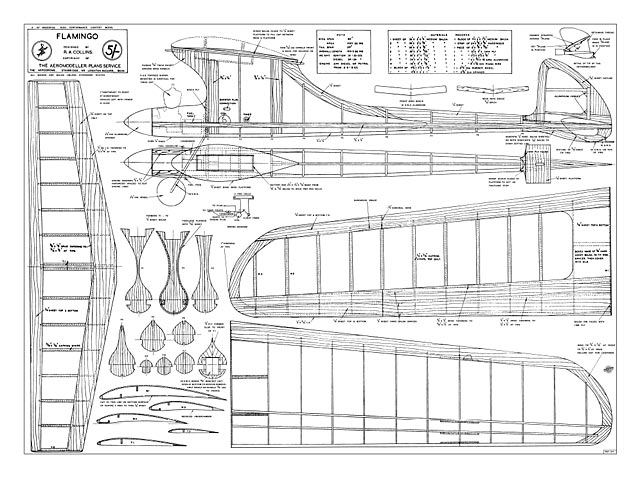 Quote: "INFLUENCED by Leon Schulman's views on pylon contest models, the Flamingo represents a logical development of the well known Zoomer (oz1636) design. Faint resemblance in outline to its American counterpart is enhanced by a different style of tail unit employing lifting instead of a symmetrical section. Designed last summer, Flamingo proved extremely hot from the first flight onwards - in fact, it impressed Roy's fellow West Essex club members so much that several including Cyril Mayes, who is noted for his own very original designs, borrowed the original drawings and made lighter Amco 3.5 cc powered versions. Each of these has proven to be as safe as the prototype during first trimming flights despite the difficulty of reducing the high power of the diesel. An ignition K&B Torpedo was used by Roy, which allows straightforward conversion to the Frog 500. The Yulon 29 or 30, Eta 29, Amco 3.5, Elfin 2.49, E.D. Mk. IV or K Vulture are ideal alternate power units.

Experience has proved that an 11 x 6 or 11 x 5 airscrew is best, 5 ins pitch being used with the smaller capacity motors. Ignition motors will give slightly higher wing-loading and require a centre of gravity position 65% back from the leading edge. With glowplug or diesel motors the CG comes about 75% back, in which case the tailplane must be given an increased positive setting. Down-thrust is not necessary, but 1° right-thrust coupled with 1/4in offset at the rudder trailing edge for a left glide turn proved ideal and permanent trimming settings.

Building Details. Fuselage: Pin the two main crutch members of 1/4in x 3/8in in position over the plan view. Add the engine bearers drilled and spaced to suit your choice of engine. Cut each former into half so that the top half may be cemented upright on the crutch, cement the 1/8 sheet platform and the top half of the fuselage backbone into position and add the battery box if it is required. Remove from the plan and add the lower portions of the formers..." 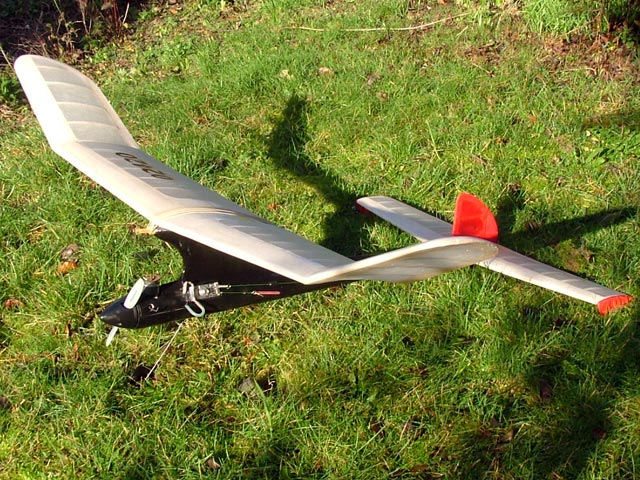