Stratus. Radio control soarer, for slope or thermal. Wingspan 125in.

Quote: "Stratus was originally intended to be a semi-scale purpose-designed thermal soarer, the idea being to end up with a model looking like a full-size glider instead of just a 'box with wings'. However, the model evolved into a general purpose slope/thermal soarer in-corporating some ideas I wanted to try out, notably airbrakes, an all-flying T-tail, and a model which could be assembled quickly without using rubber bands.

The wing section chosen was intended to give a good glide angle with sufficient penetration (useful for slope soaring), and with a loading of 8 oz/ft, this has proved to be a good compromise. For ease of transport, the model breaks down into small components, the longest being the fuselage at 56-1/2in.

The basic construction is fairly straightforward, but select really firm wood for the rear end of the fuselage. Also, because of the amount of block, be careful to use light density if possible. The airbrake system is easy to build, but care must be taken so that there is no differential in blade movement.

Each wing half is built in two panels, joined by a dural tongue. Start by making up the wing spars and boxes and set aside to dry. The rib blanks are made using the template, and the required spar holes etc, cut according to the rib station. The tip ribs are made using the 'sandwich' method. When the spar assembly is dry, glue the lower spar to the lower LE sheet. To make sure the sheet is a good fit with the LE when this is added, I use the following method..." 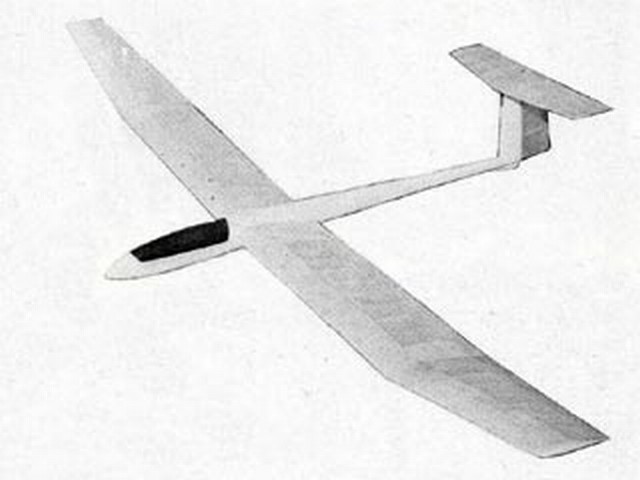 Hi I have a Stratus according to your drawing. It has now not flown for sure 30 years. Do you possibly have a drawing or knowledge of where I can find a drawing to convert Stratus to electric operation? Sincerely,
Klas-Göran Wirström - 26/10/2021
I doubt you will find any such drawings.
It's an old 1970's design despite it's attractive shape not seen much, so it is unlikely anyone converted it to electric.
It might be worth asking for power/installation suggestion on the electric sailplanes forum on www.rcgroups.com
M Hodgson - 27/10/2021
Hi . thank you very much for your reply. To save weight for the electrical installation. I thought I would change the air brakes to integrated electricity. Has also mounted skew rudders, which is a very good development for the flight properties.
Greetings
Klas
Klas-Göran Wirström - 27/10/2021
Add a comment