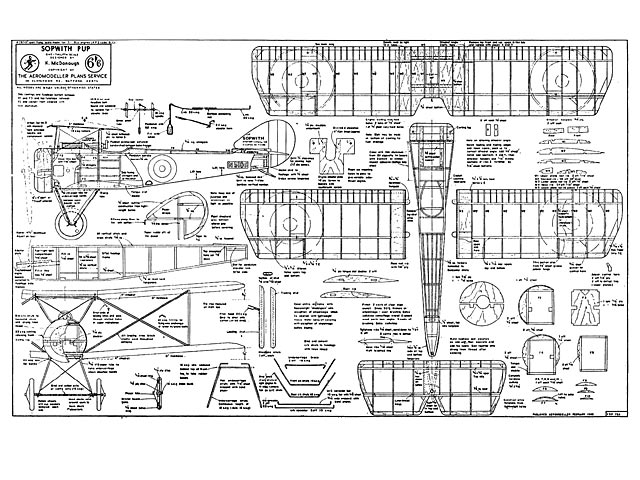 Quote: "The Sopwith Pup has been described as the 'perfect flying machine' and its simple classical lines bear eloquent testimony to its outstanding qualities. During its active career as a fighting scout on the Western Front both in the RNAS and RFC the Pup proved its worth in a variety of duties. No less than 1,770 Pups were built and interesting variants included some using skid undercarriages with an arrester hook for early carrier deck operation. Its name was never official and was said to have derived from reference to it as an offspring of the Sopwith 1-1/2 Strutter (oz1239) which is available as APS plan CL/651 for a 48in acrobatic model, price 7s 6d. Another free flight power model of the Sopwith Pup (oz1570) to 1/8th full size scale, and suitable for 1 - 1.5 cc engine already exists in Plans Service as FSP/305 price 5s 6d plus 6d post.

Sopwith aircraft always have been popular scale model subjects, and this 1/12th scale 26-1/2in span version for the increasingly popular .5 to .8cc engine size fills the APS range admirably. Construction closely follows that of the actual aircraft and Ken McDonough's own cutaway drawing is a grand aid to assembly.

Fuselage side frames are constructed over the plan first and the front three bays then filled in with in. and 1/16 in sheet together with the very hard balsa 1/8 in sheet keel pieces with slots for the lower wing tongues. The 1/4 in sq hardwood engine bearers are next well cemented to the frames. Particular care must be taken to ensure that the bearers are cemented at the correct downthrust angle. Bulkheads 1 and 2 are then laminated from 1/16 in balsa and 1/16 in ply. Bulkhead 2 is then notched and cemented over the bearers and trues up the frames while the crosspieces are added. The mounting plate is then cemented to the bearers and secured with counter-sunk screws. Cement pendulum spindle bearers in place.

The Pendulum assembly should now be assembled and installed in the fuselage, the 20 SWG elevator link should be bound only to the bamboo connecting rod at this stage and adjusted fore and aft before permanently cementing when the airframe is complete. The addition of formers cis struts, stringers, undercarriage tubes and sheet balsa fairings completes the fuselage. Metal cowlings cut from light alloy, 20 cigarette tins and attached in the appropriate locations with impact or contact adhesive give an authentic touch.

The mainplanes are quite orthodox but hard balsa must be used for the leading edges and the front mainspars of the lower wings.

Keep the tail unit as light as possible, the tailplane is made integral with the elevators. These are separated after assembly and secured to the tailplane with linen thread after covering. The undercarriage chassis frame is carefully soldered and faired with hard balsa. Paper tube for the shock absorbing rubber bands should be at least 3/16 in. dia. to allow for quick replacements.

The entire airframe is covered with heavyweight tissue - lightweight can be used on the empennage if desired.

Trim for the glide, the model is very responsive to any rudder adjustment. Proceed carefully with powered glides ensuring that the model always turns to the left. A certain amount of positive bias may be used on the elevators by moving the pendulum spindle forward in its slots and will assist in preventing a stall under power.

Before attempting full power it is advisable to become well conversantth the pendulum control as the model is sensitive to lore and aft trim. Well trimmed, the model has all the agility and grace of its full size counterpart. " 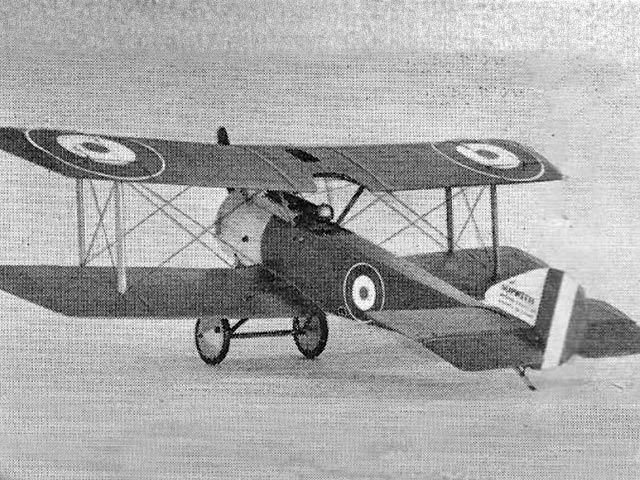