Quote: "I have long admired Trevor Hewson's Supermarine Walrus as it makes its slow and stately way round the various indoor halls we fly in. It has a perfect 'sit' in the air and seems to fly, turn and land as if on rails, but I'm assured that this is all down to pilot skill... Anyway, I got tired of waiting for him to draw up a plan and get it published, so we agreed that l would do the drawing and put the article together, while he sat back and got on with another indoor gem ...over to Trevor to explain his design:

As the 2002/2003 winter season approached, I felt the need for something different for the coming indoor flying sessions. Having been pleasantly surprised by the performance of the SE5a (30in span, 7oz, GWS gear) I tried to think through the secrets of its success and decided that a reasonably compact model using a heavily cambered section on a lightly loaded wing was a summary of the key ingredients for indoor scale-like flight. Without getting involved with expensive ultra-miniature equipment, I couldn't see how I could improve much on the weight of the SE5, so the wing area ought to be much the same, too. When I came across the Walrus, it seemed en ideal opportunity to build something dimensionally similar to the SE5a, but totally different in character.

Typing 'Supermarine Walrus' into Google turned up a few full-size pictures and a couple of reviews of plastic model kits. Eventually, on http://www.military.cz/british/air/war/other/walrus/walrus.htm I found a three-view. The resolution was not very good, but, nonetheless, I printed it out, worked out a scale factor to bring it up to about 30 inches span and set to work.

Boat building. This aircraft doesn't really have a fuselage, more of a hull. Fuselage sides were cut out of Depron in the normal way, followed by a couple of bulkheads fore and aft of the wing seat. One more bulkhead was needed, positioned so that the sides adopted the right sort of curve when the nose was pulled in, then the tail ends were pulled together. Paper patterns were needed to work out the shape of the underside panels (chines?) and all of a sudden, it was looking pretty boat-like..." 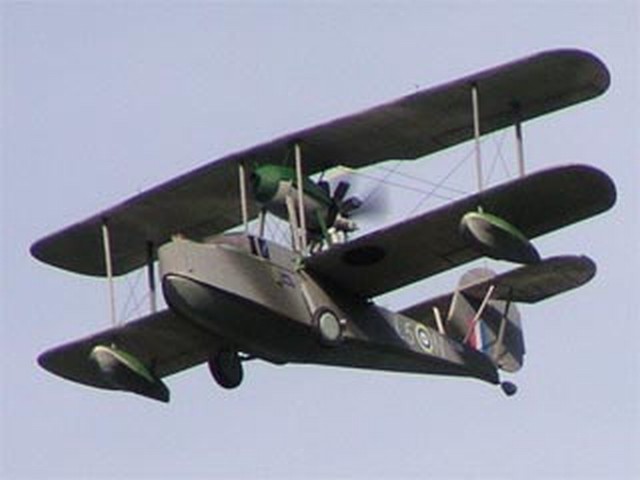