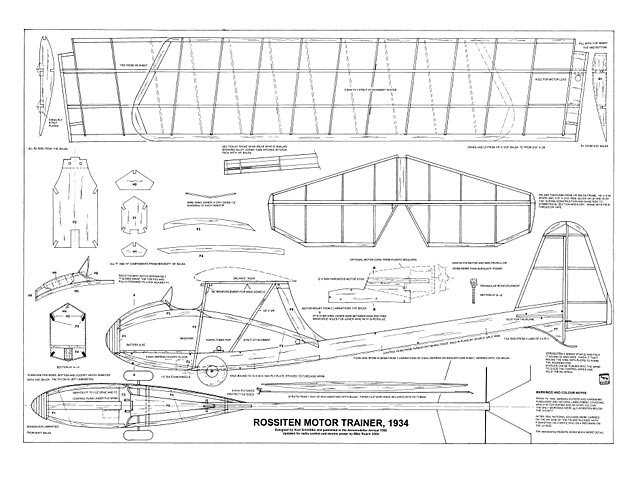 Quote: "The long train journey from Darlington to Uppingham had a change at Peterborough (or was it Grantham?). Anyway, in 1958 I bought the Aeromodeller Annual at the station bookshop. It had a Fokker DR1 on the cover and among the scores of illustrations, a plan by Kurt Schnittke of the Rositen-Motor-AS (oz9837). This was a free flight pusher motor-glider of 48in span with a neat tadpole-shaped fuselage and slightly swept wings.

I really do not know whether it is a scale model, but Rohn-Rossiten gliders were made in East Prussia and were famous in the early 1930’s. AS probably stood for Aeronautische Schule, so you could read it as Rossiten Motor-Trainer. There are pictures of very similar gliders on the sand dunes of Eastern Europe on the Net, but I have not been able to find a reference to this particular type, but never mind, it captivated me as a 14 year-old and at last, 46 years later, here is my version of it!

Herr Schnittke shows a small diesel engine (0.75cc, I suppose) providing the power, but I’ve made it as an indoor or light wind outdoor RC model for the ubiquitous GWS IPS hardware. It flies very well indeed but is perhaps a little fast for nervous indoor fingers, but I flew it untrimmed in a 4-court hall without too much trouble.

As you would expect, it’s an all-balsa model, but you could make it from foam if you wanted to. If you do, I suggest making the wings from an HWC upper surface, incorporating a spar, and a flat sheet lower surface (photo 01) I’ve tried this on another model and it makes a light and strong structure, with the fuselage and tail group made from 3mm Depron sheet. But I like the smell and feel of sanded balsa and enjoyed the challenge of deciphering the rather 'opaque' plan which in common with most of the others in the Annual, had no instructions or explanation.

The wings are simple enough, and you could get away with smaller spars than shown (1/16 x 1/8 say) if you make the struts load-bearing. The wing section is very appropriate - Gottingen 549, I reckon – as it provides a lot of lift at slow speeds. The fin and rudder may be made from strip, or if you want to stick to the original design, a symmetrical section is shown on the plan. Herr Schnittke put the tailplane slightly higher than I have shown, but I changed this in the interests of simplicity and it now fits in a slot cut in the rear of the fuselage spine..." 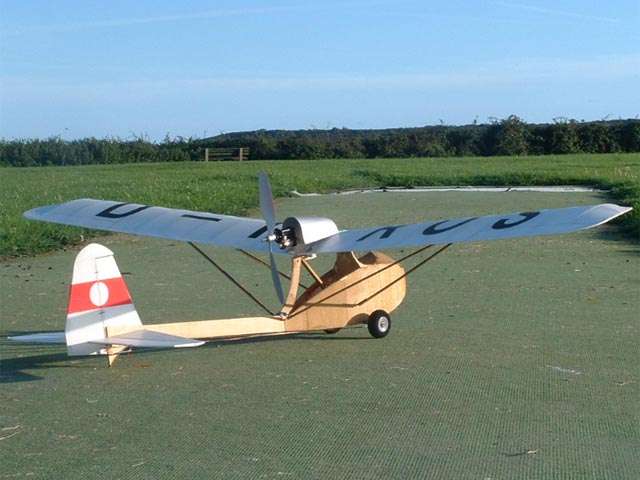