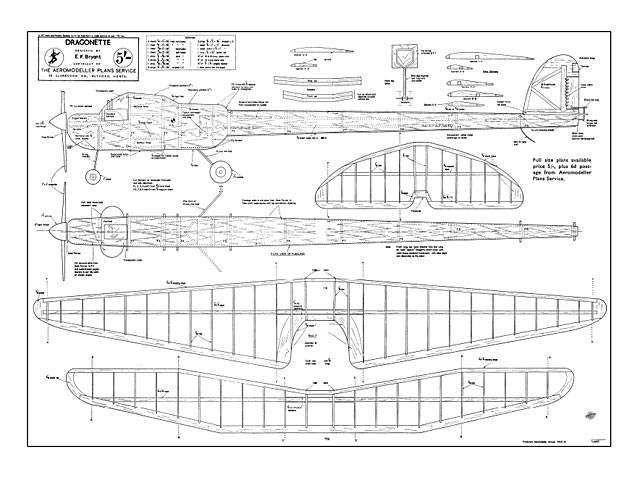 Dragonette. Unorthodox biplane design, for either free flight or single channel RC. Suitable for engines of .75 to 1cc.

Quote: "THE original model of this type, called 'Dragon Fly', was inspired by the sight of one of these magnificent insects gliding silently and effortlessly over the still waters of a canal one hot, dry summer afternoon. The author, who was supposed to be fishing, was so impressed by this performance that he determined to try to reproduce it in model form. Accordingly, the largest dragon fly to be found was sacrificed to the cause, pinned to the drawing board, and scaled up as accurately as possible.

Nature's perfection having been suitably modified, the result was a model of some 42 inches span, which although almost impossible to build, flew extremely well and realistically. Powered by a worn out Taifun Hobby of .98 cc capacity, the model flew regularly on calm evenings over the Wiltshire countryside, attracting much attention and, on one occasion, raising the local unorthodox record by some 2 or 3 minutes. After completing well over 40 hours, it was finally broken up when its owner was posted overseas.

The next model in the series was much smaller and the fuselage much modified to make construction easier, and to facilitate the installation of radio gear. Built and flown in Aden, it was a diminutive 22 inches span, powered by a new ED Baby .46 cc, and controlled by a C&S 501 receiver and an OS lightweight escapement. Over the desert sands it was found that the wing load-ing proved too high and this particular model was difficult to fly. It did, however, show that the type could be made suitable for rudder only radio control, before eventually meeting its fate in the shape of a very solid goalpost on the sports ground of Steamer Point... " 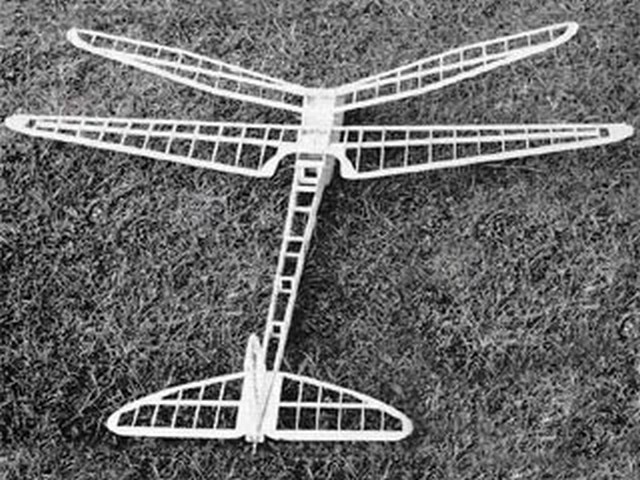