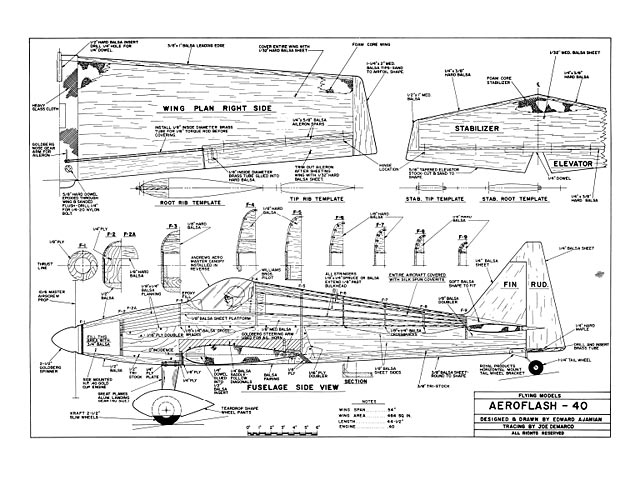 Quote: "The reassuring, steady tick of the HP .40 Gold Cup dispelled any doubt about engine reliability. I was standing next to my new plane, the Aeroflash, prior to its maiden flight and all the tenseness, pre-flight jitters, and hesitancy were in full bloom. There is something about that moment no matter who is standing there, you or I, no matter what plane it is, yours or mine. That moment brings you right to attention and maximum concentration. Let's face it, we're about to experience that moment of truth, that zone of instant high, elation, exhilaration - call it what you want, you know what. it is.

I'm holding my brand new Futaba 7FGK/ FM that will make this traumatic and wonderful moment all come together. Concentrate. Calm down. Collect your thoughts. Don't accidentally hit the dual rate toggle switch. Make sure of the position of the trim levers. Check the runway and the take-off path. I'm standing in a small clearing of a large cornfield which has become instant airport. Adequate but a little rough for the maiden flight of a new airplane.

Enough. It's now, not later. Go time. Okay, throttle to the firewall. Power coming right in, The Aeroflash is snapping quickly to life, starting its roll down the runway. Faster, bouncing in the ruts, smoothing out as she gets light on the wheels. Ah, there she goes, she's up. Some quick attitude corrections necessary. Start a left turn. Roll out and level off. It all looks good. At this point, I'm sure this flight will go well. Feels a little sensitive in pitch, probably tail heavy, but it's controllable. Make a metal note to shift the CG. before the next flight. Probably have to crank in some down elevator throw, but could increase the roll rate. She's holding her own. Man, this is great!

After the initial moments of that first flight, everything felt A okay and positively controllable so I started some aerobatics, some fast and slow flight, and some unusual attitudes. It was pretty apparent by the end of that first ride that, with the minor adjustments I had already mentally noted, the Aeroflash would be a something else bird, but you would have to fly her to know what I mean.

This is a no-nonsense, positive control machine that's a pure joy to fly because of the crisp response to every control input. Stop and start any maneuver at the flick of a stick; spins left and right at the lightest touch - definitely not a cadet's airplane. Yet it still has great stability not one of those temperamental designs that must be flown every instant without let-up. It's a hybrid type of plane, super clean aerodynamically, fast but with no bad traits. It's pretty near capable of anything you, the pilot, are capable of. The raving could go on and on, but I would bore you. Just let me add that the adjustments made after that first flight have really made this plane. If you're convinced, let's get on with the construction..." 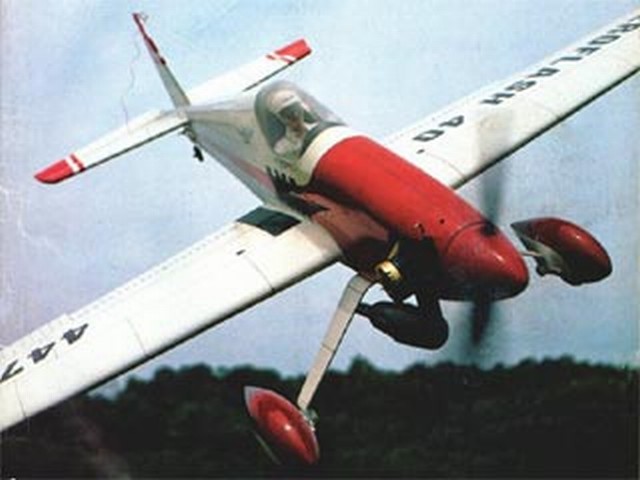