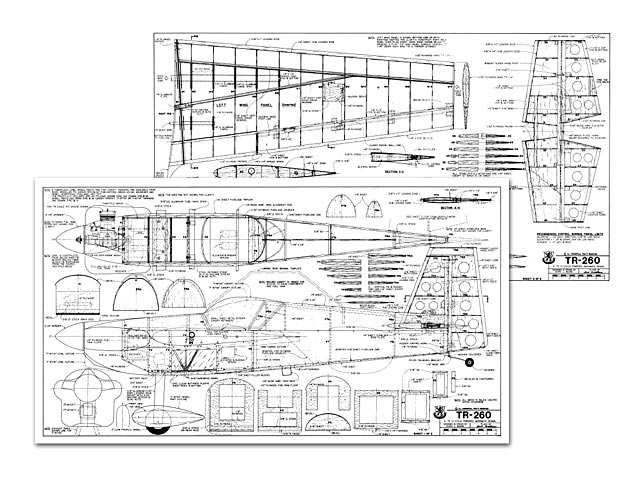 Quote: "I first saw this at South Cerney practicing for the 1986 World Acrobatic Championships. The French contingent was made up of an interesting and varied selection of monoplanes - low and mid-winged, ie CAP-230 (prototype) F-WZCH: CAPENA (one off) F-WZTC: ASA-1411 (one off) F-W YGN; DL-260 (one off) F-WYSP: TR-260 (two off) F-WTXK and F-WYVF.

It was the latter aircraft that I decided to model, although I have been sorely tempted by them all and photographed each and every one. Having made the decision I then embarked on the task of gathering sufficient information for production of an accurate scale replica. Unfortunately. information was limited to say the least (a familiar tale to many budding scale modelers, no doubt). Fortunately, Clive Smalley - of Radio Modeller Scale Column fame - had taken lots of detailed photographs and by using a combination of these and published dimensions from Janes AWA and Don Berliner's article in an American publication, I was able to interpolate and produce my own 3-view drawings.

Similar in general layout to the Laser and Akro mid-winged type of aircraft - Gerrard Feugray built the prototype F-WTXK for Georges Muzergues with a 260 hp Lycoming A 10-540, whereas Catherine Manoury's 'Sirius' F-WYVF has 330 hp! Both aircraft are stressed to 10G. The fuselage is of welded steel tubing covered with undirectional fiberglass. The wings are of hemlock, pine covered with 2.5mm - 45° mahogany plywood. The elevators and rudder are fabric covered. The airfoil is a modified NACA 2100 series symmetrical section, 14% at root tapering to
10% at tip.

Small external counterbalances underneath the ailerons are utilized. The propeller comes from Muhlbauer of West Germany; there is a single spring leaf type undercarriage with removable spats; side and underside clear vision panels are used along with a sighting device on the port wingtip to assist the pilot with alignment to precise vertical and 45° lines. There are subtle differences in the canopy profile and underside of engine cowl detail between the two aircraft. Both options are detailed on the model plans. Also. F-WYVF does not have such sharp edges to the wingtips like F-WTXK.

Like most other designers of scale models. I will start with the assumption that anyone contemplating building this model is unlikely to be a novice, and should have already accumulated some experience with 'built-up' structures. Consequently, the following notes highlight the principle areas that need particular care or more unusual methods of construction. The main considerations are accurate, strong, but lightweight construction with an emphasis on the latter if good vertical performance is to be achieved. Select your wood with care and use the glue sensibly but sparingly..." 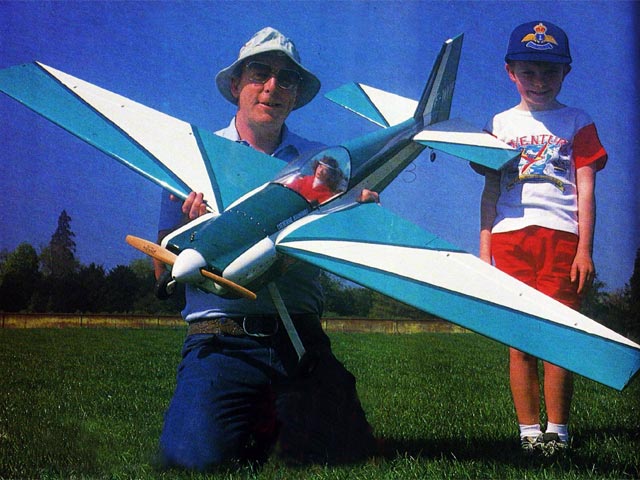