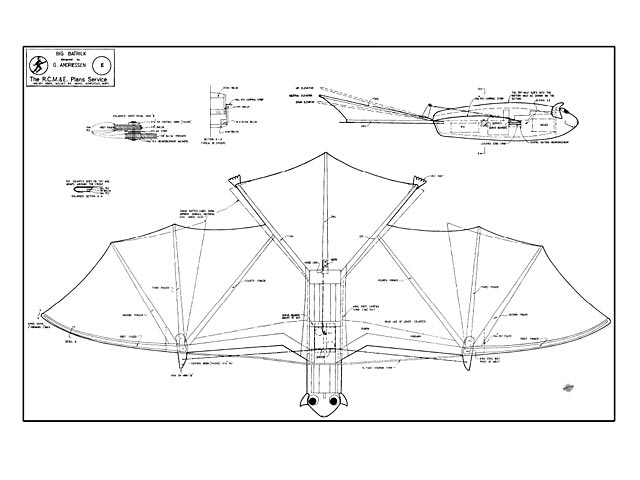 Quote: "MANY YEARS AGO I WAS FLYING my slope soarer into an ever darkening Dorset dusk. It happened to be one of those delightful plastic 'birds of prey', the Micromold Gyro Falcon designed by Douglas Pain. A fellow Marquis club member then suggested that, in the somewhat eerie surroundings, I should be flying a model bat! My first reaction was: what a splendid idea but that is all it will ever be. After all, nobody in their right mind would ever expect a model bat to be suitable as any kind of flying machine. Then I read the write-up on Stephen Winkworth's Pteranodon and I had to admit that, with enough effort, anything with surfaces remotely resembling wings should be capable of flying. Maybe a bat would need a force 6 straight upwards but it did seem worthwhile experimenting further.

Events moved on, I produced the Transmitter mixer featured in the September 1985 RCME and with that came the realisation that swing wings with a difference were now possible. For example, swing both wings back for a dive and then swing them forward to pull-out. Also, one wing forward and the other back might induce turn.

I convinced myself! But a bat? Well the real thing had plenty of hinges, far too many in fact. Also no dihedral, no vertical tail area, not much horizontal tail area. In fact it was becoming apparent that millions of years ago it flew not 'because' but 'in spite of'.

The appearance of the bat was greatly influenced by reading 'Golden Bats and Pink Pigeons' by Gerald Durrell. This fascinating book leads one to realise that it is pleasant to carry out projects not only because they might be worthwhile, but also because they are fun Not only for oneself but also for others

The final design was arrived at by once more finding the right thing to unashamedly copy. Inspiration dawned one day when looking at a hang-glider picture and realising that a bat closely resembled a pair of hang gliders side-by-step. Of course it was not possible to get the Centre of Gravity low enough to actually build a hang glider bat but Rogallo wings can be configured with a tailplane.

The bat has a membrane joining his hind legs, which is in the right place as far as we are concerned but not at the required negative angle. Furthermore sweeping the hind legs up would inevitably ruin the wing angle. However the bat's tail divides this membrane and by angling the tail up the membrane forms an anhedralled tail unit at a negative angle. This also solves the problem of achieving some vertical tail (fin) area. I don't know what the bat would think about this reasoning but it pleased me..." 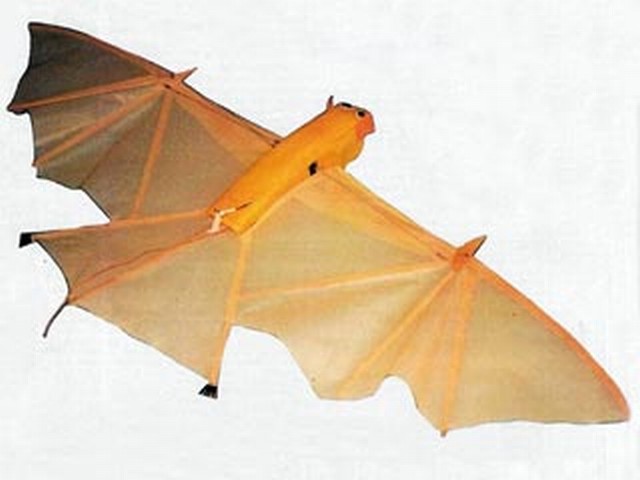