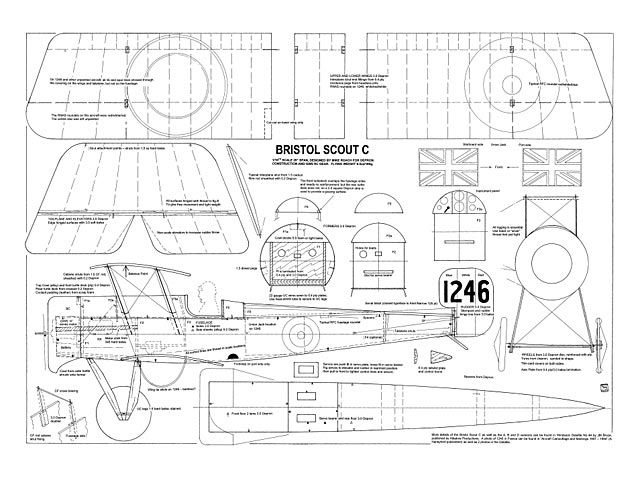 Quote: "Get ready for the winter indoor RC scale season with this depron scale model from Mike Roach.

Along with the Sopwith Pup, this aircraft was the most highly regarded pilot's aeroplane of the period and has been almost as popular with modellers. Its proportions are perfect for free or radio controlled flight, as it has a longer nose and a larger tailplane than the Pup and one can see why Eddie Riding chose it for his famous Bristol Bullet (oz884) free flight plan all those years ago.

The Sopwith had 6in more wing chord and 12in more span, which gave it 15% more wing area, so perhaps this is why we see so many Pups around. I used the PL Gray 'Aircraft Archive' drawings as a basis for my Bristol Scout C. I don't think the drawing gets the fin quite right: there is definitely some reverse taper on the leading edge. You could easily build a Type A (never modelled before, I believe, but it has some charm) or a B, but the C or D have the most dihedral. I chose the RNAS Type C serial 1246, for no better reason than it had fin stripes, Union Jacks and RNAS roundels for a bit of variety! Scouts were also seen in PC10 upper surfaces as well as the natural fabric of 1915, so there is lots of choice of markings.

The model is drawn to 1/10 scale, which gives a wing area of 2.3 sq ft, so if you build it to fly indoors, it must weigh less than 7 oz to fly well. If you can get down to 6oz, then really slow and realistic flight is much easier to achieve. The GWS hardware weighs 3.5oz, so you must be very much on the ball to make the lower figure! I think that enlarging the plan to 110% to give a wing area of 2.75 sq ft might well be the best trade-off. Apart from the wing section, I have only made one compromise in the interests of slow flight: both wing and tailplane incidences are two degrees greater than scale, which gives a better 'sit' in the air when flying slowly.

The model is built almost entirely from Depron 3 mm foam sheet with carbon fibre rod for the struts and the thinnest plywood in stressed areas such as the motor mount and wheel hubs. The total weight of these parts, including all the paint, but excluding the undercarriage, was exactly 2 oz, so perhaps a 6 oz model is not completely unrealistic. Although I used Depron, you could use blue or pink insulating foam cut into sheets instead, or even go the traditional route and make it with balsa strip, tissue and dope. I've shown all the rib and spar locations, should you wish to do so.

This is my first entirely Depron model and I have been very impressed with its ease of use and strength as compared to other foams, so much so that, apart from hot-wire-cut wing sections, I shall probably stick with it in future. It needs very little preparation - you must sand off the slightly greasy surface layer to make a firm glue joint, but it takes sprayed or brushed acrylic paint really well, to make a convincing 'fabric covered' surface. Masking tape sticks much better than to pink foam, so it is easy to get a decent edge to markings... "

Note: This scan of the plan is a 200 dpi bitmap, and was quite noisy, so I spent some time cleaning it up. See supplement raw scan in case any crucial areas got overly cleaned. 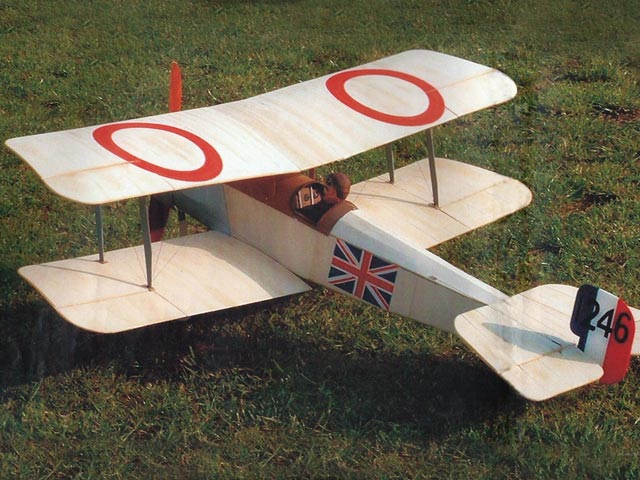