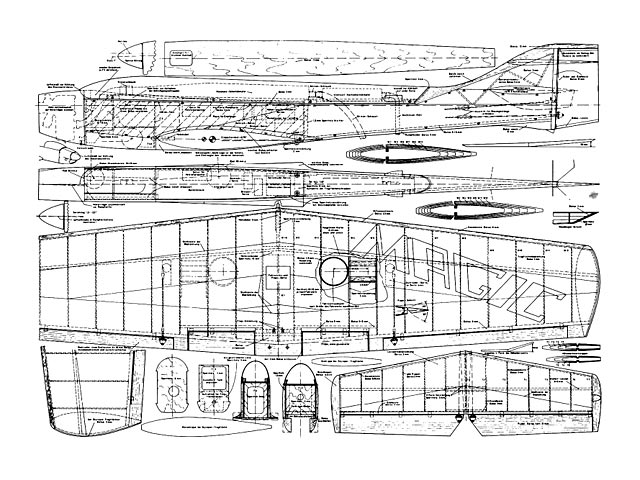 Quote: "SINCE BEFORE the 1979 World Championships my latest design 'Magic' has generated a great deal of interest. My inability to compete in that event is now a matter of history, but the faith I had in this design prior to that Championship was amply justified by the model's performance at the '81 event in Acapulco, Mexico. Constant pressure from the RCM&E editorial team has finally prompted me to make available the plans for the 'Magic' and these are shown here in the '81 Mexico form, and published in a model magazine for the first time.

The Curare (oz5527) was, of course, the basis for Magic. My initial design concept called for retention of that model's outstanding performance while reducing noise. I also wished to modify its characteristics to give a more realistic flying style similar to full-scale flying, the style in fact provided by my Las Vegas design Dalotel. This then required clean design for minimum drag. Tuned pipes provided very quiet operation and increased power but to meet my requirements, the pipe had to be installed within the fuselage with a downward facing outlet exhaust to prevent turbulence over the control surfaces. This type of installation has the double bonus of looking better and avoiding the oil staining of the finish that frequently spoils the looks of an aircraft.

There are some new ideas in the area of Magic's aerodynamics, some of which were tested on the Dalotel and/or the Curare. The newly developed airfoils have a de-creased thickness percentage, resulting in lowered drag compared with the Curare. The Dalotel-style wing tips yield a further reduction in drag. The linear change over the complete wing of the airfoil lift coefficient produces a much slower landing speed and greater flight stability in turbulent air.

The fuselage is designed as an airfoil with a thickness of about 6.5%. The high point is exactly identical to the total centre of gravity. This helps rolling manoeuvres and knife-edge flight. Because the fuselage centreline is higher than Curare's (caused by a hidden pipe), it was necessary to increase the dihedral and this has a positive effect on flight stability and rudder effect.

For a more realistic flying style that moves away from the very fast flying, jet style so prevalent today, Magic's wing area was increased to lower overall wing loading. The increased area compensated for the additional weight of Magic caused by its MK variable pitch propeller.

Development of Magic is, for me, the start of a new generation of models that fly at a more constant speed through the various manoeuvres and at much lower noise levels. Couple this with a variable pitch propeller and the result is additional control of manoeuvre speed beyond that offered by use of throttle alone... " 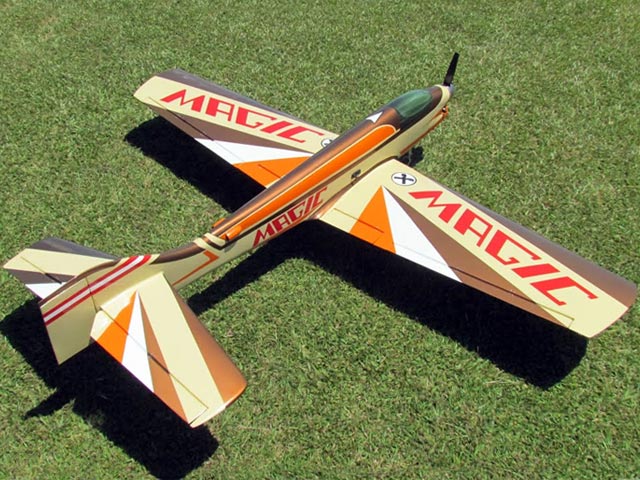