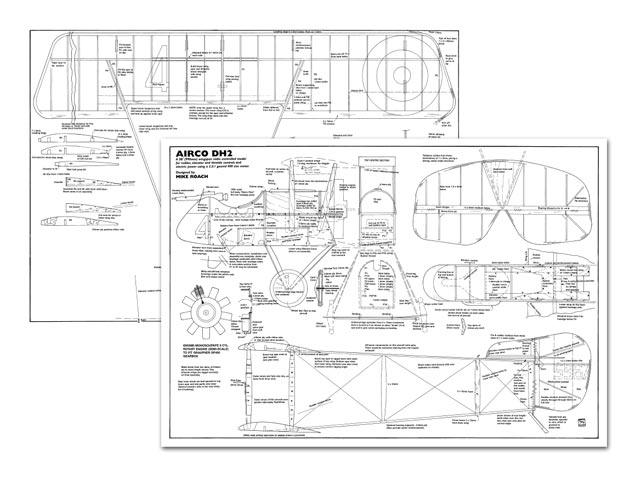 Quote: "It was 'Uncle Roger', whose column on the back inside page of Flight International Magazine I always read first and whose love of de Havilland aircraft obviously infected me, who used to caption his pictures of DH Moth aircraft with the sigh of "aaah - de Havilland". However, I don't think that he would have had quite the same to say about the DH2, a single seat fighter of 1915. In fact it has a certain logical neatness in its design (unlike its contemporary, the FE8, a truly horrible looking aeroplane), but perhaps none of the elegance that Uncle Roger so admired in de Havilland's later aircraft shapes. Its open cockpit, pusher engine and blizzard of struts, bracing and control wires are certainly a challenge to produce in 1/9th scale for a geared 400 motor and seven cells! There are some advantages of course. For example, the battery and servos can be at the front and are easily accessible (and well out of the way of the propeller, which is safe from damage and can be a nice wooden one) and the Pete's Pilot figure can play his full part in making the model look realistic. Although the aircraft looks complicated, there is only one really tricky bit and that is the final assembly of what is, inevitably, a one piece model, which is somewhat unconventional.

The remainder of the structure is remarkably easy. Of course, the elevator and rudder require external control wires in 'real' locations, but this is now normal modelling practice, even at this scale. This 1/9th model is to what Chris Golds would have called cartoon scale - a true scale replica would have 1 mm diameter tail booms. It is very closely based on the constructional principles of Peter Rake's designs - build light and fly carefully - but although I modified his Sopwith Pup (FSM Nov/Dec 1999) into a Triplane and a Tabloid, I have not had the courage to use a wooden prop just yet!

In full-size life, the DH2 was designed for just one purpose - to defeat the Fokker scourge in 1915. Apart from the Germans, no one had at that stage of the War designed a reliable interrupter gear, to permit a machine gun to be fired straight ahead without shooting off the propeller, so a number of manufacturers produced pusher aircraft, which gave a superb view and field of fire, at the cost of certain handling difficulties. Despite its looks, the DH2 remained in service until 1917 and until 1918 in the Middle East.

Now, I am not a good pilot - I prefer research, drawing and building and my weekends are taken up with sailing or wind-surfing, so I never get to the shows, but the DH2 does fly, the motor has plenty of power and it looks good on the ground and in the air. All you WWI enthusiasts have just got to have a go!

As you can see from the photograph of the naked aircraft, the fuselage is a very simple box structure with integral struts, motor mounting plate and battery floor. The tail group is easy, light and non load-bearing. The wings are standard single spar structures without ailerons, using diagonal housings to accept the boom, which is made of 1/8in (3mm) square spruce longerons epoxied to hard 1/8in (3mm) balsa uprights and may be rigged with button thread. In fact the whole model could be rigged to give a more scale effect..."

Note: This plan is one of a series posted on RCGroups by the designer, Mike Roach (SopwithMike) himself. See https://www.rcgroups.com/forums/showthread.php?3022867-Mike-roach-free-plans I checked with Mike and asked if he was happy for us to host copies of these plans, here on Outerzone: He said: "Hi Steve, I would be very happy for any of the plans I put up on the free thread to be put on the Outerzone site. I'm a great admirer of the site, have visited it often for inspiration and it's one of the reasons I have offered my own plans free to copy. I'm hoping Steve85 will be offering short kits at some stage. If anyone has comments on any of the plans, I'd be very happy to amend drawing for future builders. All the plans are hand drawn, so there will be the odd error and ommision! Best wishes, Mike "

Note: This scan of the plan is a 200 dpi bitmap, and was quite noisy, so I spent a couple of hours cleaning it up, removed the paper folds, also fixed some of the many typos that crept into the magazine print version of the plan. 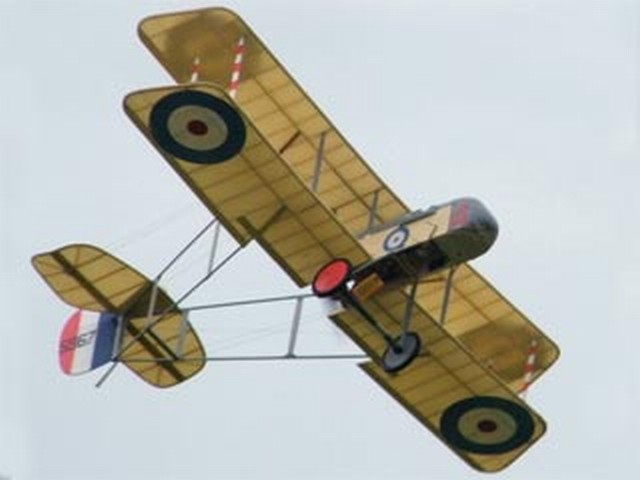 Have been trying to build this model.. Based on THIS plan. A Major frustration to be Blunt. Simply..it's grossly inaccurate .. pretty well everywhere. Nothing ! on it is trustworthy For reasons I don't even want to guess on. It's Distorted in Most everything. Seriously problematic / annoying. Best advise is to delete the damned thing . At least until it's Competently Corrected.
Anon - 04/05/2018
Sorry to hear of your problems building the Airco DH2. They have clearly made you very frustrated! This is a published plan by a respected scale designer, Mike Roach. The photo is of the completed model, built and flying. Perhaps you could contact Mike via www.rcgroups.com/forums to discuss your difficulties further? Mike is active there and a really nice, helpful chap.
Mary - 04/05/2018
Greetings, I read the comment about the drawings being distorted. I went to the thread listed in the plans description. I followed the link to the Dh-2 plans and read the description. There is a post, dated January 2018, saying that some copies of the plan exist that were distorted in the scanning process. Correct plans are posted. I didn't investigate the details of the posted images, but felt this information would be useful. By the way, Mike Roach cites OZ as inspiration for posting his plans as free downloads. Take care.
James Hickman - 01/06/2020
Add a comment