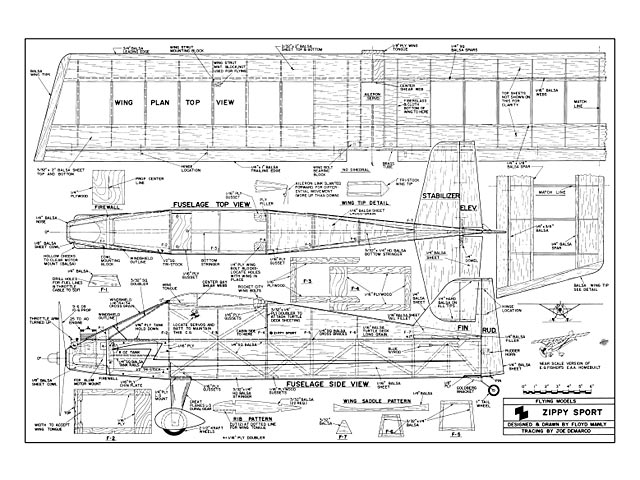 Quote: "Love at first sight! That's what happened at the first peek of ZIPPY! It was featured as an EAA homebuilt in the May '83 issue of Model Aviation, and I fell in love with the name, the color, shape, size, and even the plaid uphostery. Lacking the skills to build a full sized aircraft, the decision was made to scale it into a radio controlled model. The RC Zippy was so easy to build and fly that I wonder why I didn't think of it before the MA article.

With a FOX .35BB in the nose, she flies more like the Cassutt racers that designer Ed Fisher built, than a puttering EAA homebuilt. She's fast and responsive at full throttle, but when you tick back to 1/3 or 1/2 gas, she's a pussy cat! The detailed steps of construction articles are usually such dry reading, and often so complicated to follow that they're ignored by most builders anyway, so I'll first just briefly cover the hints and quirks that you'll find helpful. You can follow the step by steps later in this article, if the Zippy catches your fancy too...

The full sized Zippy is not a high performance aircraft, and in fact, cruises at only 85 mph. I fudged a little to get more than glider like speeds out of her. The Fox .35BB is almost too much motor, even for the vertical performance I wanted. A .19 or .25 should give satisfying aerobatics. The landing gear is 1/8 aluminum, but bent wire would work just as well. Scale wheels would be 1-1/2 inch, and impossible to use on grass fields. I used 2 inchers, and set them one and a half inch forward. We also deviated from true scale by stretching the fuselage almost two inches, then increasing the area of all the tail surfaces...

The Zippy Sport is a homebuilt aircraft, designed by Ed Fisher. The author's R/C sport scale version used a Fox 35BB for some very lively performance. Construction is straightforward and yields a strong airframe.

Construction notes: Keep her light. Four and a half pounds can be expected with standard servos and bat-tery pack. Our's tipped in at exactly that, ready for fuel. With 541 square inches of wing, she's carrying 19 ounces per square foot. Almost in the glider range. All the wood sizes are similar to most kits, and she's strong, even if you skimp on the glue and epoxy. Check the center of gravity carefully. The high fuselage profile makes her look bigger than she is, and that 9-1/2 inch chord wing means you don't have much moment to play with. Go for nose heavy rather than level balance, and certainly never tail down, or with that short tail she'll be squirmier than a two year old in church... " 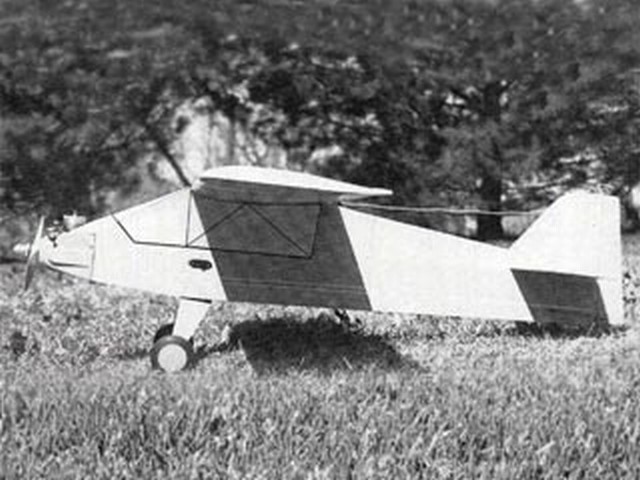