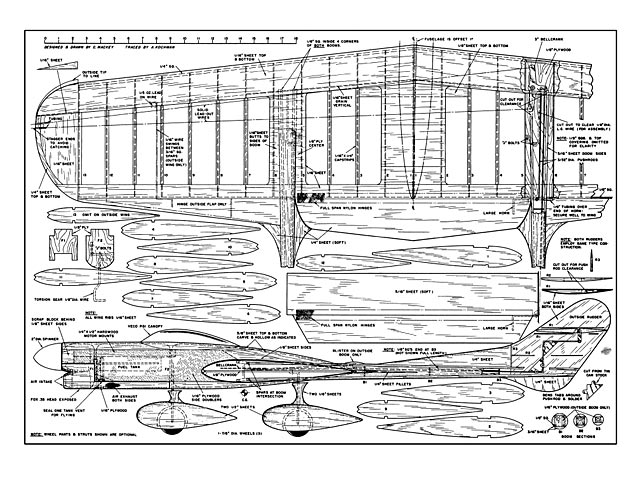 Quote: "The twin boom designs do not fly better than the conventional designs, but they do fly as well. The main advantage is their unusual appearance. The Carousel is mainly an XP-design to test some new ideas.

The airfoil and nose gear were changed to improve the landings. The front landing gear uses a torsion type set-up that improves landings on rough fields. Take-offs are still limited by prop clearance. The stab and elevator were moved out of the slip stream. Theoretically, this should be an improvement, but we don't believe it showed any advantage in performance. The biggest problem was getting tight smooth control to the elevator. We did this by using the braces shown on the plans, but had to pay for it in weight. If you choose to lower the stab, mount it on wing or thrust center line and enclose control horn in hollow bottom rudder fin on the out­side. This will lighten the design a little.

The third experiment was the weighted flap. The idea was derived from a free-flight pendulum control in a British magazine. I never tried it because I was never troubled by slack in my lines, and because I wasn't sure that would happen in a vertical climb. The idea was discussed with Lee Steinbrook and he didn't think the ship would be affected in vertical climbs, so he tried it on his ship. It worked perfectly, giving him line tension on 70ft lines at an exceptionally slow speed in dead calm air. When tried on the Carousel, it worked well, but caused the wings to dip on the square maneuvers. This was cured by cutting the flap weight down to 1/5 of an ounce.

How well any stunt ship flies depends on five things: design, power, weight, control and alignment. If a proven design with adequate power fails to fly properly, it is due to one of the latter three mentioned above.

The weight includes balance and wing loading. Balance plane as plans show, making only slight changes to suit your flying style. You can build a light ship by using the lightest wood available and still strong enough to do the job. Use just enough glue to hold tight, and a thin finish. Almost all overweight airplanes can be traced to heavy or excess dope. It's not how many coats you put on, but how many you sand off that makes a slick, thin finish... " 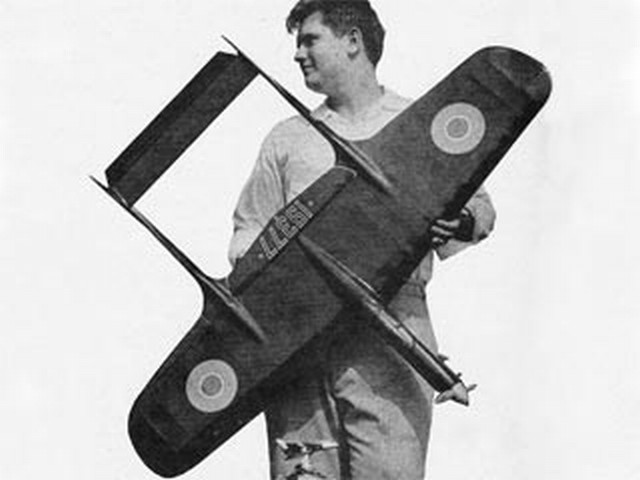