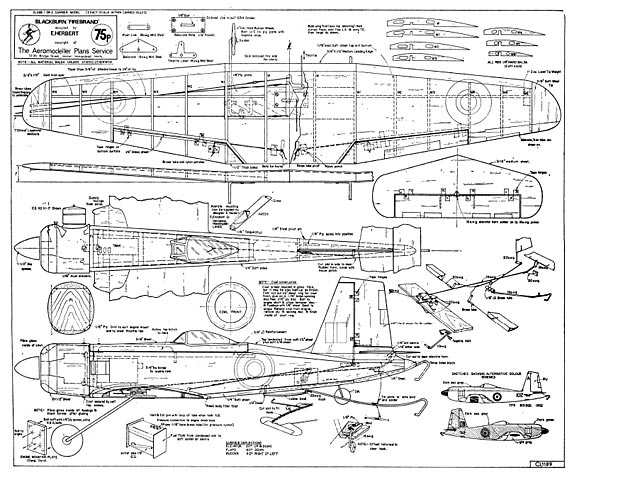 Quote: "The control line 'Carrier' contest is an ideal event for the competitor, combining as it does the chance to show your skills in both building, flying and, of course, engine preparation. As was discussed in my article in the April issue, it is not too difficult a class to fly and it does offer much scope to the inventive. The main problem has always been the lack of a suitable carrier, but now that the ever-active Three Kings club have made the HMS Fly-catcher mobile, this should no longer be a problem for contest organisers. However, even without a 'proper' deck to land on, one can always rig up a temporary affair by pegging out arrestor wires at the side of a runway. The event is certainly a 'crowd puller', ranking with R/C scale as a major attraction.

The Firebrand model is suitable for either the American Class 1 or Class 2 and with an increase in wing area to 300 square inches plus the adoption of a 1/2 inch wide sheet fuselage and a .35 cu. in. motor, could he used in the 'Profile' class. In this country there is, as yet, just one class with no restriction on engine size (other than the FAI limit of 10 cc) and in fact the model, as drawn, should have a good flying performance with any engine from a 'hot' 2.5 cc to a 10 cc R/C glow. For competition flying the obvious choice is either a 'rat race' .40 or an R/C 60, which develop around the same maximum power, A profile version was also built and it was found that an Enya 29 provided more than adequate power.

Construction is by no means difficult, but neither is it in the 'beginner' category - especially with regards to the control system which must operate smoothly without binding. As with all contest models, keep a careful eye on the weight - when flying at low speed an excess of ounces can be quite a handicap! However, also bear in mind the stresses involved in an arrested landing - make sure that the arrestor hook and undercarriage assembly are carefully and strongly assembled. Epoxy resin is most useful in these areas.

Firstly, cut the bottom wing sheeting to shape and mark the rib position on the top surface. Now make up the 'heart' of the system - the control plate assembly. If you prefer, you can, of course, substitute a Roberts 3-line control unit instead of the 'do it yourself' item illustrated. With the control system installed on the ply under-carriage mount, glue the whole unit in position. Add the leading edge and ribs while the bottom sheeting is pinned flat to the building board. Notch the leading edge and score along the sheeting at the dihedral breaks, then lift and block up each tip one inch as shown. Run cement into each break. When dry, unpin then carve and sand the leading edge to section. Make up the leadouts, leaving them overlength and add the throttle, flap and elevator pushrods.

The flap areas should now be cut from the bottom sheeting and hinged with nylon tape. Next, add the flap LE followed by the flap torque arms, which are retained/pivoted with tubing and nylon patches. Epoxy the tip weight in place, glue the wing trailing edge in place at the flap areas, then sheet..." 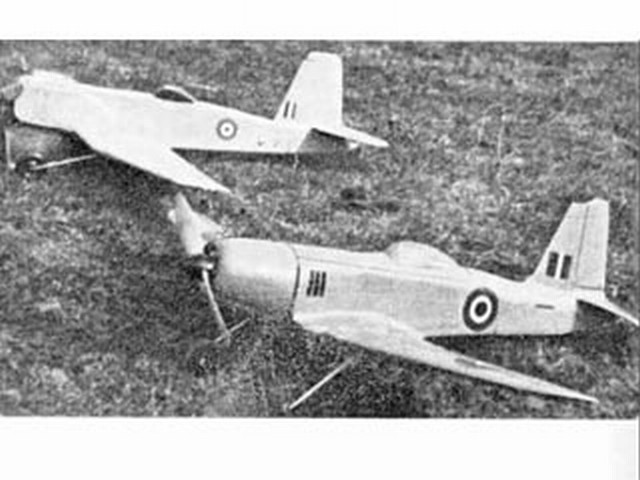