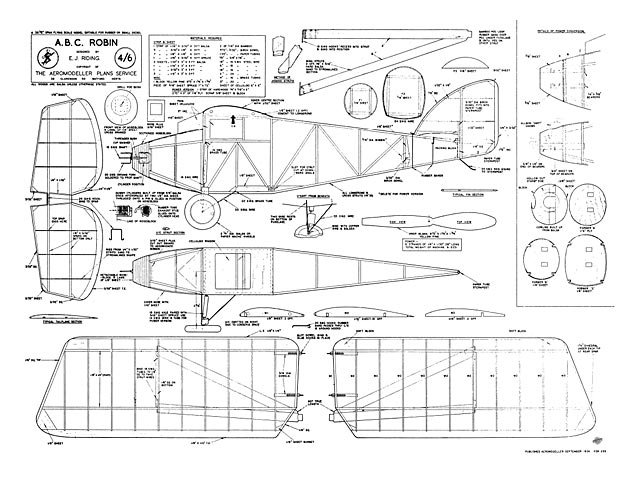 Quote: "Bob Linn's conversion of an old favourite for diesel power - a new two-in-one plan for the ABC Robin.

FOR several seasons a steady favourite in Plans Service as a scale rubber model, the ABC Robin has also been the subject of many novel power conversions. One such successful model is that by American Bob Linn of Los Angeles, California, and in view of the more accurate detail he has provided, the existing APS design for a rubber design has been revised and the power-conversion details added to make it a "Two-in-One" plan.

Bob Linn's attraction for this little lightplane came when he first spotted it in the July, 1946 issue of Aeromodeller. It impressed him as an ideal subject as a 1/2A free flight scale model for the Inglewood Flightrnaster's annual contest. Bob decided to add a few more details than Eddie Riding had shown - so by digging through some back issues of 'Flight' and 'Aeroplane' he came upon some excellent information and photos that enabled him to convert the rubber-powered model into an Allbon-Dart powered scale contest model. By studying all the information available the Robin is as true to its big brother as possible without spoiling its chances of being a good flier.

Main structure changes are as follows: In the wing, the spar spacing was changed to come closer to the original, a heavier trailing edge used and the root ribs slanted to add the swept back to the wings that accuracy calls for. Mounting arrangement of the wing to the fuselage was changed to prevent anything showing through the cabin roof window, which is also a new addition.

In the tail surface structure the following changes were made: the shape of the elevator trailing edges were changed to conform to the orginal outline. External elevator and rudder control horns along with the control cables to the sides of the fuselage may also be added. Little points like this mean a lot when those sharp-eyed judges start giving a model the works at a scale contest.

In the fuselage the largest number of changes were made: first of all, the basic 1/8 in sq structure was retained. Nose shape was redesigned to allow for a good solid engine installation and to better conform to the lines of the original as found in the Flight magazine construction shots. The only landing gear change was to use heavier wire in the main strut member. To finish off the fuselage the entire structure was covered with 1/32 sheet to simulate the plywood on the real aircraft. Interior details such as seat, control column, rudder pedals and instrument panel may be added, for they are a very important part to any scale model.

Complete with an Allbon Dart installation the Robin weighed around 10-1/2 oz, and its flight performance is quite satisfactory. Besides being a good scale contest model, it is an excellent sport flier and will provide many hours of entertainment for you with its realistic flight pattern."

Update 15/06/2016: Replaced this plan with a clearer copy (patterned background removed), thanks to Pilgrim. 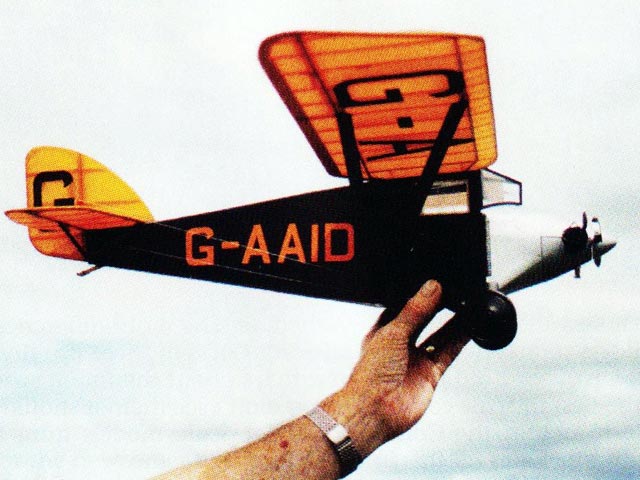 I built a compressed air powered version at about 32 inch span using the Italian CA motor and tank combination available during the 90's . The Robin's fuselage being wide accommodated the tank well and it flew beautifully averaging 1-2 minute flights
paul helman - 09/08/2019
Add a comment