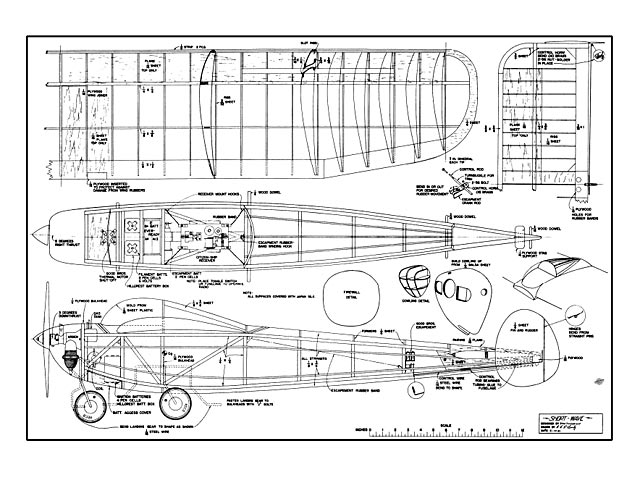 Quote: "The winner of the 1950 Nationals RC event presents a nifty sport model design with a contest type performance...

Most people familiar with R/C will remember our old design, the Hoosier Hot Shot (oz2230) and those who have seen the Hot Shot fly will remember it for its smooth performance. We have flown many types of R/C ships, from Walker's Hot Rod to the Rudder Bug, and have never found any that compare in all around performance with the Hot Shot.

The Hot Shot incorporated design features never before seen in R/C such as twin rudders and NACA slots. The Hot Shot was too stable. That statement may sound fantastic to the R/C builder, but it is a proven fact that the Hot Shot could be placed in full rudder either way and never spin. It was as near a perfect example of CH Grant nose-up in turn design as had ever been seen. This stability was a disadvantage in contest work for any type of violent maneuvers. At the 1949 Nationals we found it impossible, even through the use of radical rudder trim, to make the Hot Shot spiral - thus losing enough points to come in a poor fourth. Along with the aforementioned facts, the Hot Shot was large, light and slow, making a poor showing in windy weather.

In the design of the Short Wave, we have attempted to improve on the weaknesses of the Hot Shot and to add some new features. The Short Wave is a shoulder wing design, having high thrust line and low center lateral area. We have always been students of CH Grant and our force arrangements are, as nearly as possible, according to the book. Short Wave incorporates a low, sturdy tricycle gear which is essential for take-offs in contest work..." 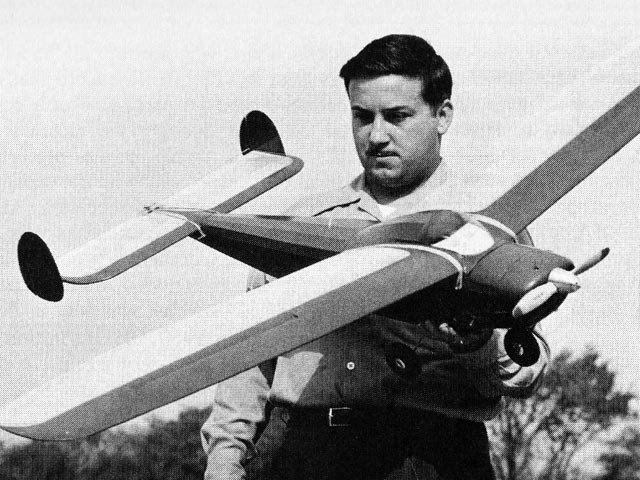