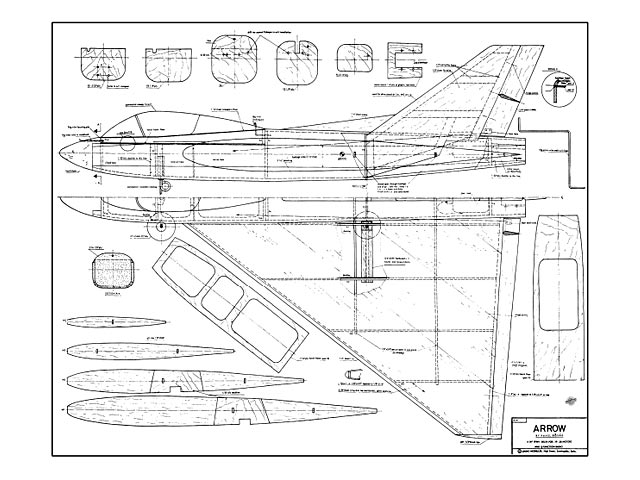 THE ARROW was built after some experiments involving several models of this configuration. One of these also had a pusher engine prop set-up, and there were other variants, but Arrow was the last and the best of the series.

The first in the series was created some four years ago, and was rudder-only, controlled by single-channel push-button radio. It had a Jena .15 engine and I flew it in a number of contests for this category of model. Later, when I needed an attactive and different model for a flying display, I fitted an Enya .19 with a 9x5 pusher prop. Radio equipment is three-function, on rudder, elevator and throttle. The model is of all balsa construction and is built in one piece. This however is of no consequence to the average modeller who nowadays at least has the use of a 'banger'.

Construction. It is best to begin by constructing the various sub-assemblies. First, the ribs, with ply bracing for the undercarriage; then the fuselage sides with ply doublers according to the plan; fuselage bulkheads, rudder' engine mount etc. follow. All the details appear on the plan, as do those of the fuel tank, which I originally built - from tinplate - to fit, though you may find something suitable in your local model shop.

One point must be gone into in some detail, however, and that is the fin construction. The fin is made up from a balsa frame, built over the plan, and then covered with sheet each side. When made, it is covered with lightweight Modelspan. It should be finished, covered and doped before fitting into the fuselage. Note that the lower part of the fin goes right to the bottom of the fuselage..." 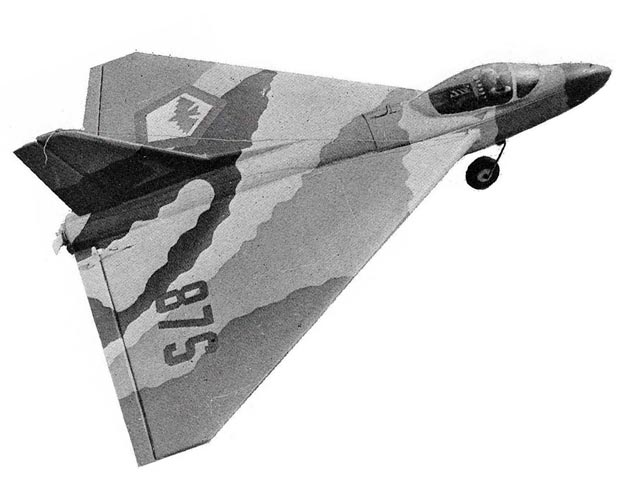