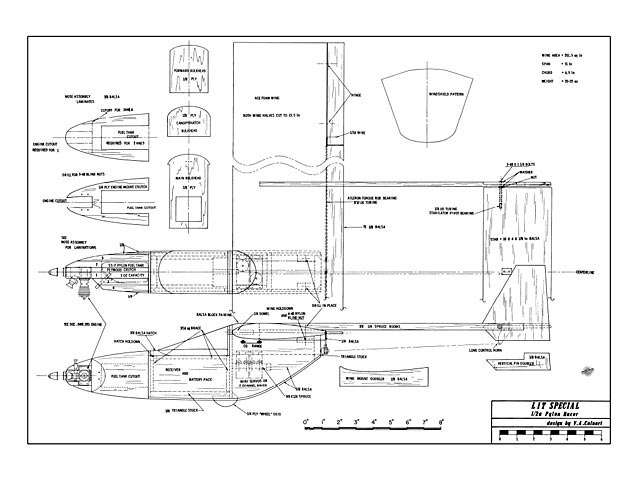 Quote: "This 1/2A Pylon Racer is light and tight with twin booms and even a pop-in/pop-out flying stabilator...

The original LIT Special [#29 L.I.T. Special ‘Chappy’ N138C] designed and built during the heyday of the Goodyear event, was one of those airplanes that should have conquered the world, but didn't. Like many other aircraft of unusual, but attractive (if unproven) aerodynamic configuration - the Northrup flying wings, the Curtiss XP-54 (a twin boom pusher with ducted wing) the LIT Special no doubt suffered the pains of new ground-breaking. Look up a photo of the above aircraft; they are all beautiful but never went past the prototype stage. Unfortunately, it seems that the really good airplanes are the culmination of a long and proven series of refinements. It's also the surest, if dull, way to get there - Good Luck, Jim Bede!

The LIT Special promised a significant reduction in drag with its clean nose, fuse-lage buried tandem wheels, and an efficient wing working in clean air undisturbed by the prop slipstream. The pusher prop promised higher effective thrust, while increasing the stability and control of the aircraft. If you think I liked the airplane, you're right.

Like its forerunner, our 1/2A Pylon Racer looks fast but leaves behind the problems of a pusher installation, substituting a clean and accessible engine installation. Hand-launched, it doesn't suffer the poor ground handling of the tandem wheel original and with only elevator and ailerons to worry about, it features a simple control system installation. Since the PROPS (Pylon Racers of Puget Sound) organized 1/2A Pylon Racing in the Northwest a couple of years ago as a training ground for new Formula I pilots (it didn't work - there are more guys flying 1/2A by a long shot than F1) it has become obvious that the winner is a good flyer who has a correctly propped, consistent engine which he knows how to start. These same winners also build very nice, clean, and, probably most important, light airplanes. Lighter means faster and tighter turning airplanes.

If you utilize an Ace foam wing, the LIT Special will weigh between the minimum allowed, 20oz and 22oz, without any special efforts. This weight includes two of the mini-servos (KPS-12, RS-4, etc) receiver and 225 mah battery pack. This airplane builds very easily and quickly. The fuselage is extremely durable and the wing/empennage assembly is such that you will be tempted to build and keep a spare handy. The pop-in/pop-out flying stabilator should last forever! The original fuselage has now seen close to three hours of actual flight time (that's a lot of 4-minute flights) and is on its second wing.

Some of you experimenters will enjoy the ease with which different wings can be substituted. There are two other features of the design worth mentioning. The first is the deep fuselage with high wing which makes for an ideal hand-launcher, while the other is a forward center of gravity. A forward CG is something which is completely strange to a lot of modelers who as a rule consistently turn out tail-heavy airplanes. It makes the airplane very groovy, which is a desirable flying quality in a Pylon Racer. The all-flying horizontal tail or stabilator has plenty of control authority to cope with this forward CG and reduces trim drag..." 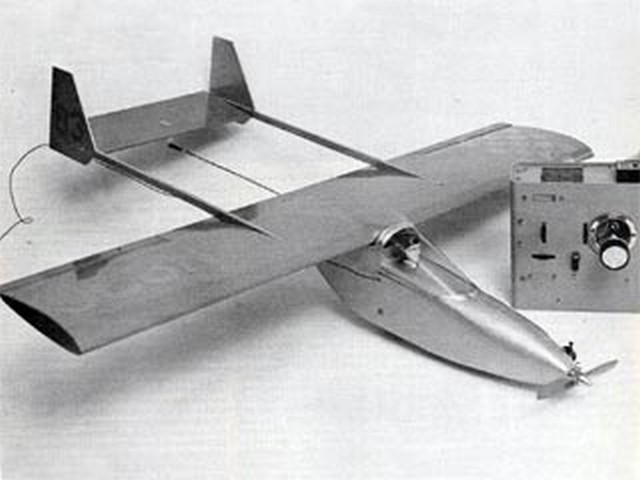 Attached a couple of pictures of my recently finished 'Lit Special' [more pics 003-006]. I could not resist to making some changes to the original design... The all moving tailplane was replaced with a conventional stabilizer/elevator, I used square carbon fiber rods for the tail booms and the foam core wing was replaced with a build-up balsa wing with rounded wing tips. Many thanks for outerzone!!!
PeterI - 12/04/2019
Add a comment