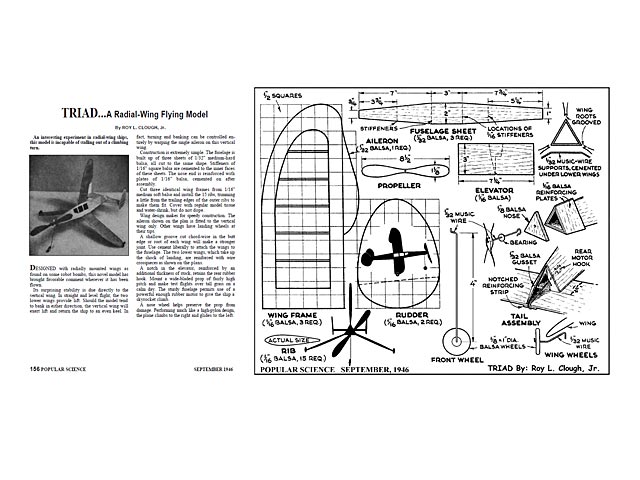 Quote: "An interesting experiment in radial-wing ships, this model is incapable of stalling out of a climbing turn. Designed with radially mounted wings as found on some robot bombs, this novel model has brought favorable comment wherever it has been flown.

Its surprising stability is due directly to the vertical wing. In straight and level flight, the two lower wings provide lift. Should the model tend to bank in either direction, the vertical wing will exert lift and return the ship to an even keel. In fact, turning and banking can be controlled entirely by warping the single aileron on this vertical wing.

Construction is extremely simple. The fuselage is built up of three sheets of 1/32 medium-hard balsa, all cut to the same shape. Stiffeners of 1/16 square balsa are cemented to the inner faces of these sheets. The nose end is reinforced with plates of 1/16 balsa, cemented on after assembly.

Cut three identical wing frames from 1/16 medium soft balsa and install the 15 ribs, trimming a little from the trailing edges of the outer ribs to make them fit. Cover with regular model tissue and water-shrink, but do not dope.

Wing design makes for speedy construction. The aileron shown on the plan is fitted to the vertical wing only. Other wings have landing wheels at their tips.

A shallow groove cut chord-wise in the butt edge or root of each wing will make a stronger joint. Use cement liberally to attach the wings to the fuselage. The two lower wings, which take up the shock of landing, are reinforced with wire crosspieces as shown on the plans.

A notch in the elevator, reinforced by an additional thickness of stock, retains the rear rubber hook. Mount a wide-bladed prop of fairly high pitch and make test flights over tall grass on a calm day. The sturdy fuselage permits use of a powerful enough rubber motor to give the ship a skyrocket climb.

A nose wheel helps preserve the prop from damage. Performing much like a high-pylon design, the plane climbs to the right and glides to the left." 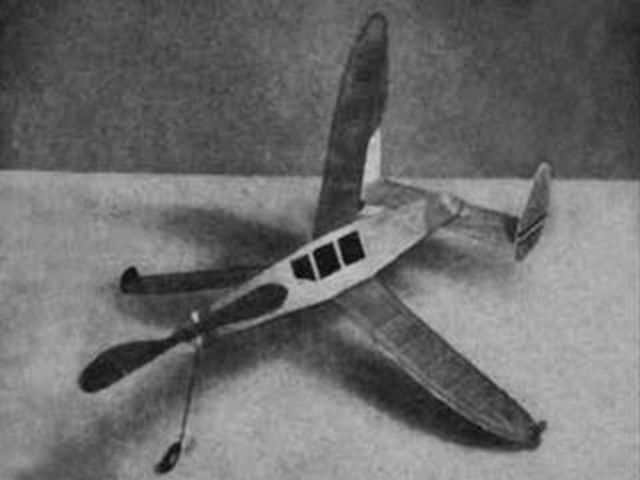