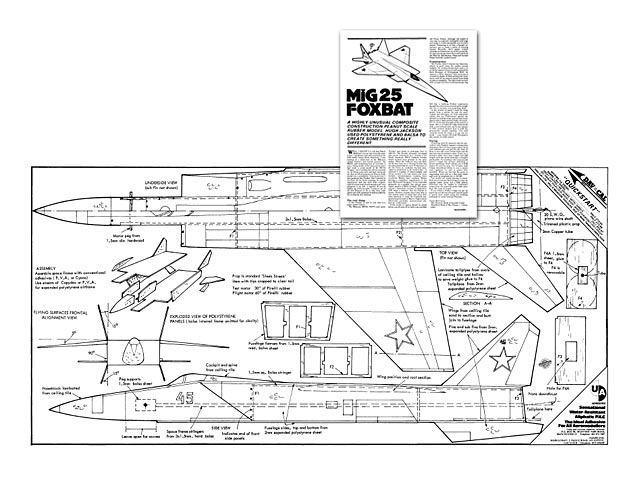 Quote: "WELL, I DOUBT if it will beat Butch Hadland's Lacey, but it should cause a stir! I pondered, some 48 hours before the 1980 Derby Indoor Scale Nationals. I was looking at a three-view of the Mikoyan design bureau's best known product, the MiG25 and wondering how to translate it into a flying model.

A few days previously I had made a crude model of the MiG23 Flogger out of ceiling tiles which surprised me by flying quite well and had convinced me that an all-polystyrene jet Peanut Scale model was a possibility.

Four hours later I had produced the Foxbat that I present to you here. At the Derby meeting, its radical appearance and size more than compensated for semi-scale shortcomings and I was delighted to be able to squeeze 20 second flights out of the monster. It must be one of the few Peanuts to fly at less than scale speed and with anhedral, doubtless aided by the enormous tail surfaces.

If the Foxbat is new to you, here is a quick potted history: The Mikoyan MiG-25, NATO code name 'Foxbat' was flown in prototype form in 1963/64. The Soviets obviously developed this potent interceptor as a counter to the North American XB-70 Valkyrie bomber which showed such promise in the early sixties. When the Valkyrie was cancelled, the Soviets went on to develop Foxbat into the plane described by one US Secretary of the Air Force as 'probably the best interceptor in production in the world today.' It captured a number of time-to-height and circuit records in the late sixties and, more recently, reconnaissance versions have overflown Middle East conflicts.

Whilst bearing a superficial resemblance to the later McDonnell Douglas F-15 it is intended primarily as a straight line 'all-out' interceptor capable of Mach 3.2 flight. The plane caused a diplomatic incident in September 1976 when a defector flew his Foxbat to Japan. Western experts discovered that it was mainly made of nickel steel alloy with some titanium to resist the frictional temperatures generated in Mach 3 flight which effectively precludes conventional aluminium construction.

A few words of caution should be added before you all rush off to build your own Red Air Force. Firstly, although the model is very easy to construct, its fragility and large size make it unsuitable as a novice project. Trimming is, at best, a fraught experience and at worst a series of running repairs.

Secondly, don't expect contest winning performances out of this projectile. It's just a good ego trip to fly it and watch all the Bleriots, Blackburns, Fikes and Laceys being hurriedly packed away!

Construction: My Foxbat doesn't require any titanium, which is good news for pocket money budgets. Its constructional style owes a lot to the far superior foam aircraft produced by Rick Grainger of Nottingham MAC.

In essence, a fairly minimal balsa structure is covered in panels of 2mm polystyrene insulation with all the relevant panel lines inked on prior to assembly. The 2mm foam is available in large rolls from hardware stores. 50p will buy a budding Foxbat constructor enough for a few dozen aircraft with enough left over to insulate your modelling shed.

In the interest of speed I made the wing panels from a ceiling tile and the nose, cockpit and tail pipes are from laminated ceiling tiles too. Performance purists are advised to build the wing up from 2mm foam sheets with a light internal balsa structure.

PVA can be used throughout the project, but a better idea is to build the balsa framework with a conventional glue and to use smears of UHU general purpose glue to weld the polystyrene panels together. You will certainly know all about it if you use too much - your Foxbat will melt! This glue is also handy for field repairs.

Flying: Trimming calls for patience and the proverbial calm English summer evening plus long grass. Kick all the young couples out of your selected spot and feel for any wind. If there is any take your Foxbat home and let true love run its natural course. If not, try a tentative glide from knee height and, add weight until the model performs a straight gentle glide... " 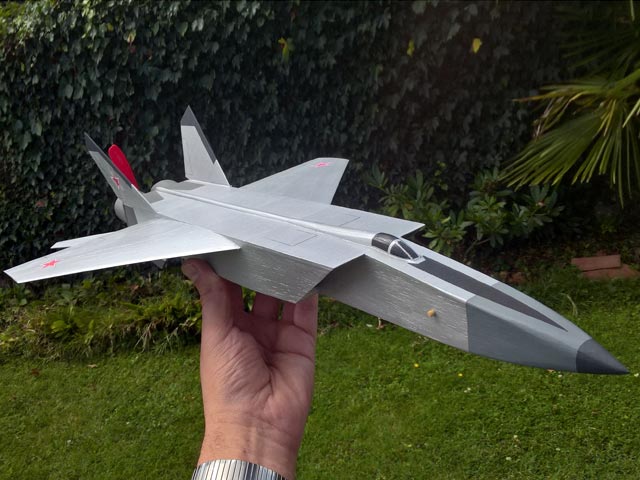 Hi Mary and Steve, Please find attached two pictures [main pic, 004] of a MiG-25, decorated like a BM version (Foxbat-F). Contrary to the plan, this one is all sheet (1/16 curved and sanded for wings, 1/32 for the rest) and its weight is 43 grams with rubber (quite heavy). But a question: has any one in the community tried to build and fly the original foam model and found the balance point? I'm not so confident for the test flight campaign, expecting that the enormous fuselage will produce a significant amount of lift... Best regards and stay safe,
Yannick - 21/08/2021
I love the finish you've got on this model. Looks great.
SteveWMD - 21/08/2021
Impressive…I have this plan and have been tempted by it but done nothing yet. Your weighty model may need a bigger prop , for performance a lighter balsa/tissue structure might work.
Peter Rea - 27/08/2021
Add a comment