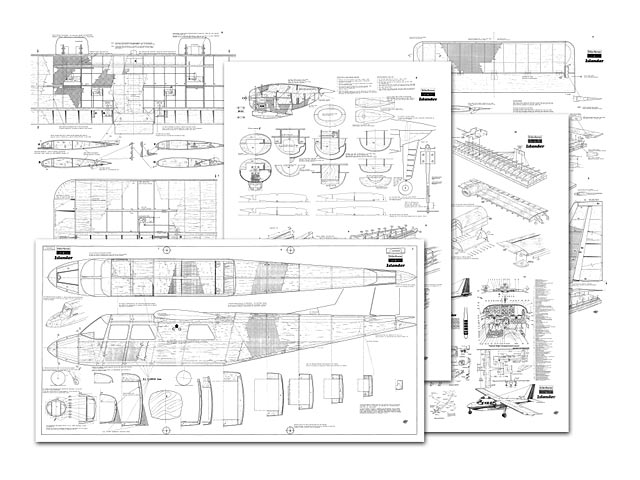 Quote: "Hello Steve and Mary. Please find here ... the Svenson Britten Norman Islander, a 84in scale model. There are 5 big plans and two extras: component list and decal sheet. There are no building instructions, but a lot of explanation is given on the plans itself. No matter what, this is an advanced building plan. I hope you can share this wonderful design on Outerzone. Kind regards, Dries"

Note this is a large download, the planfile is over 7MB.

PRODUCED IN BELGIUM, this Svenson kit is virtually all of balsa/ply construction and, at 1/7 scale, this 84-1/4 in span model is by no means a quick-build. Rather, it is a rewarding exercise for those who really enjoy building a model. The amount of timber supplied in the large box is impressive, and the quality, on the whole, very good. The die-cut sheets - all 54 of them! - were in the main clear cut, the odd ones being a couple of rib sheets that were somewhat crumpled due to the softness of the balsa.

Assemblage: The wing construction features conventional techniques, except that it has a double-skinned centre section inboard of the nacelles. With no dihedral to provide natural breaks, I should think the 7ft. wing calls for a three stage programme on the average modeller's building board or workbench. I found a slight discrepancy in the position of each nacelle relative to the lateral centre line, and in the predetermined gap between each of the pair of nacelle ply walls, dictated by the rnainspar. These I repositioned, only to find that the thick plywood ulc support bulkheads and balsa nacelle bulkheads did not fit too well. On reflection, it could be that the apparent misalignment was in fact deliberate, to offset the chance of engine running resonance. In which case, my ill-fitting bulkheads could have been self-inflicted.

While building the engine nacelles I elected to seal off the fuel tank bays completely from the wing internal structure (though this was not shown. on the plan) so as to ensure they stayed fuel-proof. I wasn't too happy about the nylon undercarriage clamps supplied, feeling that they would flex and allow the wire leg to be pulled away from the ply bulkhead on a heavy landing. I therefore replaced them with an equal number of 22g steel clamps, secured both sides of the wire by self-tapping screws - plus some Araldite to further increase the safety factor.

The laminations of 2mm sheeting proved a very effective way of producing the cowls, especially as the laminations were bonded with fibreglass resin, the assembly being held with rubber bands until cured. Quite a rigid curved cowl resulted, which was further strengthened by the addition of the nose section and intake scoop.

The flaps were rigged, using the nylon hinges supplied, with their hinge line set forward of the flap leading edge. To enable them to be extended to a 45° angle, I cheated a little by cutting off the rear parts of the nacelles to that angle, and installing no nacelle portion onto the flap.

The fuselage needed 'persuasion' at a number of points. The wing seat and forward fuselage area have double skin construction, the inner and outer surfaces being held apart by curved balsa formers. The outer surface is a ply/balsa sheet lamination, with the inner skin a single zmm. balsa sheet. I made 'construction formers' from thick corrugated cardboard to hold these in the curved shape while gluing, suitably weighted down. The method illustrated, planwise, for jigging the front of the fuselage to its final shape, gave problems at the nose. Pulling the sides parallel was not too difficult at the wing trailing-edge position, but the nose section below the windscreen takes a sudden curvature in a very short distance. Being a double curvature, the ply doubler made things quite a tussle, but I won through by liberally wetting the sheeting at that area and then holding the sides in position onto a former smaller than the actual one, with strong rubber bands.

The elevator is from solid sheet and, although not very heavy, perhaps a sliver of ballast weight could have been saved had it been built up like the fin and rudder. The plan shows two tailplane incidence settings: 0° for 40 power and 2° negative for 30's. Planning for the trial use of each size engine in turn, I opted for 1° as a compromise.

Finishing and rigging: The completed airframe was given three coats of sanding sealer, and rubbed down with 320 wet-and-dry paper after each coat. Trying to avoid adding more weight than necessary, I covered the entire model, except the nacelles, with lightweight Modelspan tissue. Nacelles and cowls had two thin coats of K&B resin and hardener, rubbed down after each coat. The weight of the wing with cowls attached, before covering, was 4 lb 1-1/4 oz. After covering and epoxying, and with two thin coats of dope, it weighed 4 lb 5-1/4 oz.

At this stage, as weight was obviously going to be critical, I fully rigged the model to get an idea of what the all-up weight was going to be. It scaled 10 lb 5 oz, but unfortunately the CG was now 7/16 in rearward and, to bring it right, required a further 3 oz in the nose. Just 8 oz left before that 5 kilo legal maximum would be reached! I kept a wary eye on the decor application but despite the greatest care the paint still added a total of 14 oz, which took the Islander overweight, at approx 12 lb, by the time further compensating nose-weight had been added. This, of course, meant that a Civil Aviation Authority exemption had to be obtained, in order to fly the 'aircraft' - but this is another story for another occasion. (See our December 1975 Editorial - Eds).

Test flights, or 'twinexperience': Two HP 40F motors were installed for the initial flight tests, at the zero thrust settings recommended, each motor having had a brief run without pressure feed, prior to installation. In the model, however, I incorporated a pressure feed system working from the home-made mufflers.

This was to be my very first attempt at flying a multi-engined model, so I first made a couple of high speed taxi runs, with all centring controls at neutral, to get the feel of things. The model was easily kept on an into-wind heading, with no tendency to snake. I cannot say what sort of speed was reached (with about 2/3 throttle) but, during these runs, all five wheels remained firmly on the tarmac.

With both engines still running, I started up another high speed run, and this time reached full-throttle opening. With a mere whisper of up elevator, the Islander raised its nose and made a rather fast climb away. The motors were really singing on their 10 x 4 Punctilio props, and the model was flying quite fast. The only adjustment needed was on the elevator, which I had to trim down to check the climb; apart from this, the Islander flew straight from the board.

A couple of low fly-bys were made but, during the second - on about 1/3 throttle setting - as I opened up to climb away and bank left, the starboard motor faltered. Thinking the engine had actually stopped (due to the fact that the machine seemed reluctant to come around in a left turn), this was where my lack of experience on twins showed up. I immediately throttled back and brought the model round in a right turn, back towards the runway - and made a fast, smooth landing, diagonally across it. The speed was such that the model ran out of tarmac and went on to bump across the hump and ditch bordering the runway, completely shattering the plastic noseleg mount, breaking the starboard prop and tearing holes in the engine nacelles where the main legs had sprung backwards on impact..." 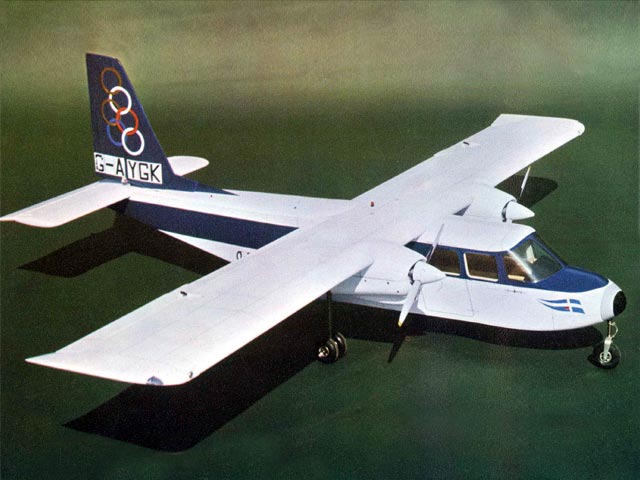