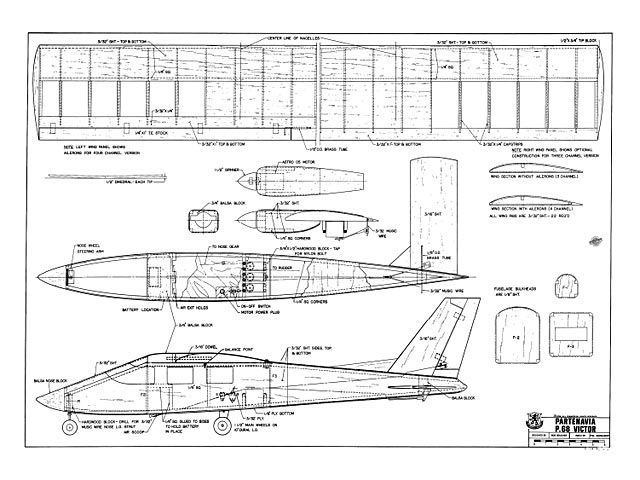 Note this design was later kitted by Astro Flight.

Quote: "This exciting new scale electric mini twin was born one Saturday morning while Bill Warner and I were organizing the first all-electric contest sponsored by the North American Right Masters Club of Los Angeles. We had decided to have two Stand-Off Scale events at the contest, one for free flight and one for radio control. After making this momentous decision we spent the rest of the day looking through Bill's excellent collection of aviation magazines to find suitable scale subjects for ourselves, (nothing beats getting a head start on the competition). Bill was looking for an old timer for free flight, and I wanted a modern ship for RC.

Suddenly there it was, Professor lng. Luigi Pascale's P-68 Victor. This revolutionary light twin is manufactured by Partenavia of Naples Italy, and can carry six passengers at over 200 mph on two 200 horsepower Lycoming 10-360 four cylinder engines. Through Professor Pascale's aerodynamic wizardry and engineering precision this is accomplished without complicated and expensive slats, slots, flaperons or retractable landing gear. The P-68's fast clean lines accentuated by the swept tail, and its elegant structural simplicity make it a natural for electric power where aerodynamic efficiency and light weight structures are mandatory.

I started drawing plans that evening, and had the preliminary drawings completed the following evening. The mini twin would be powered by two Astro 5 electric motors swinging Cox gray 5-1/2x4 props, and would be guided by the superb S & 0 full house competition radio, all within a compact four foot span and 4lb gross weight. I use a special 1.2AH battery pack and a three speed throttle system using a three position switch and a 1-1/2 ohm resistor.

At a scale of 1.25 inches equals one foot, the model would have the characteristics shown in Figure 2. Construction would be all balsa covered with MonoKote for light weight and fast building. Late that evening Don Dewey of R/C Modeler called asking if I could do an article on a small scale ship for the Astro 5. Perfect timing - all was to be revealed to RIC Modeler at the contest four weeks away.

Ten days later at our secret test site in Sepulveda Basin the P-68 in red, white and blue trim was charged up for its maiden flight. It was a perfect California day, blue skies and almost no wind. With 600 feet of smooth asphalt runway ahead of me I advanced the throttle to half. Both motors started, came up to speed, and the ship taxied out to take-off position very nice and easy. Then I hit full power and held a touch of back stick and just a little right. After about 100 feet and a little more back stick she lifted off and climbed out briskly. A few circles around the field and a couple of loops revealed a slight nose heavy condition. After the required adjustments the second flight was beautiful. The P-68 flies itself off and climbs out smoothly on back trim and cruises smooth and fast on neutral trim. Aileron response is nice and fast with strip ailerons, and elevator response is smooth and positive with the powerful all-flying stab. On approach the nose can be held high without worrying about dropping a wing and, once down, it sticks like glue. But enough talk, now let's start building.

The P-68 is basically a simple box with a constant chord wing and is quite straightforward to build. The constant chord flat bottom wing is built flat on the board. I used a thick mahogany shelf from the local lumber yard. A smooth flat board insures a straight warp-free wing. Tape the plan to the board and cover with clear plastic film to keep the glue from sticking to the plan. The lower wing skins, cap strips, and trailing edge strips are glued and pinned in place directly over the plan..."

The Partenavia Victor is a scale electric twin aircraft manufactured by Astro Flight Inc, 13377 Beach Avenue, Venice, California 90291. Designed by Bob Boucher, the Partenavia first appeared as a construction article in R/C Modeler Magazine. The price of the kit is $49.95 and is available direct from the manufacturer and retail outlets. The wing span is 48-1/2 in with a wing chord of 8 in for a total wing area of 388 square inches. An Eppler 387 constant chord airfoil is used. The ship is designed for twin Astro 05 electric engines, and 4 channels of operation.

The kit is of conventional construction using balsa, plywood, and hardwood in the fuselage and balsa in the wing and tail surfaces. The kit includes a complete landing gear assembly including wheels, steering arm, hinges, horns, threaded control rods, and aileron linkage. The plan size is 36 x 50 in with building instructions included on the plan sheet in addition to the 4 page instruction manual. All parts are die-cut and shaped.

Unusual features of the kit include the twin electric motors, full flying stabilizer, and unique two speed motor control which does not rob rpm from the top end of the motors. The wing is bolted on for clean lines. The weight of our prototype ready to fly was 64 ounces for a wing loading of 23.8 oz/sq ft. Our model was finished with white Quik Cote, black Solarfilm windows, and Pro Stripe trim. The radio used was an Ace 4 channel system.

In the construction of the kit, when joining the wing halves together, be sure to install the plywood in the trailing edge sheeting so the wing hold-down bolts will have a firm attach point. We found that the brass tubes for the elevator hinge are 1/8 OD x 2 in while the stabilizer is of 3/16 thick balsa. The 3/32 diameter music wire that supports the whole stabilizer has a tendency to flutter slightly in flight. After 4 flights on our test model, cracks were evident along the brass tube glue line in the stabilizer. We elected to glue on 1/16 ply doublers measuring 1 x 2-1/2 over the brass tubes. This corrected the weakness on subsequent flights and no further cracking occurred. The instructions on the plan, or in the instruction book, do not call out what size hook-up wire to use for wiring the electric motors or switches.

Since DC motors draw a lot of current, too small of wire size will prevent the motor from coming up to full speed and the wires will get hot. Conversely, using too large a diameter wire just adds unnecessary weight so we would recommend using 20 gauge stranded wire which seemed to be adequate.

The wood supplied in the kit varied in weight up to 1/2 ounce. Be sure to select your sheeting so that wing halves will balance properly. Also, cut a 2-1/2 in diameter hole in former F-2 before gluing the former in place since it makes the installation of the nose gear much easier.

With regards to flight performance, the Astro 05 twin electric motors have a surprising amount of thrust. They have no problem pulling this aircraft off the ground with a good rate of climb out. Rolls, loops, and other basic maneuvers can be done with ease. The motors pulled evenly with no evidence of fishtailing or wandering. The mid-range throttle setting would just maintain level flight, and this throttle setting proved to be a good approach speed. Flying under full power, the battery life averages 4-1/2 minutes. The model balanced without any additional ballast by following the
placement of battery and equipment shown on the plans. With the wing loading on the high side, keep your approaches fast and flat, since the aircraft will stall very quickly in slow speed flight. The stabilizer is full flying, so keep your movement to a minimum. The aileron throw was 1/4 in each side of neutral and proved to be more than adequate.

The manufacturer states that, using a Cox 6/3 or Top Flite 6/4 nylon prop will increase flying time by two more minutes. This is one ship you can fly in your Sunday suit and it makes it very difficult to go back to greasy conventional engines after experiencing the thrill of electric flight?" 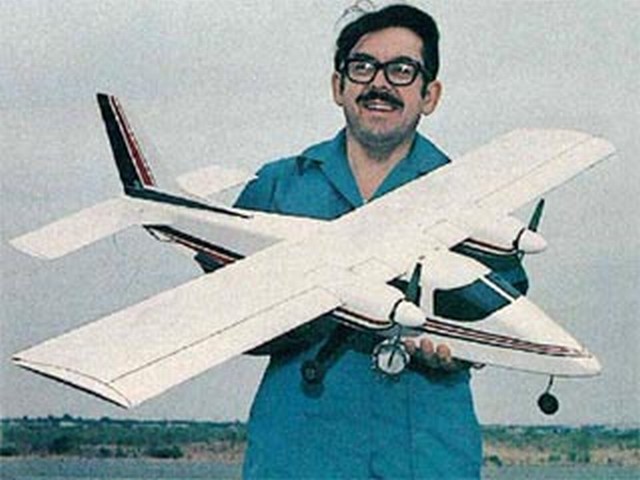