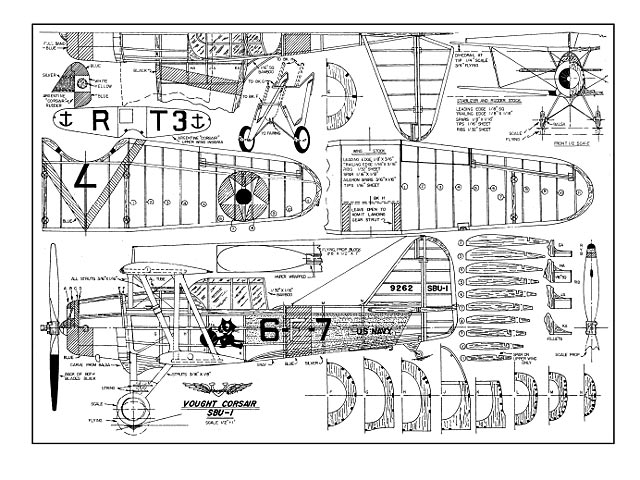 Update 13/01/2020: Added article (and pics), thanks to GTHunter from http://www.theplanpage.com/Months/2007/2007.htm note this includes the drawing pages as as printed in the magazine.

Quote: "ONE of the first dual-purpose ships in naval service, the Vought SBU-1 is a development of the experimental Vought fighter, the UF3U-1. With a top speed of 205 miles per hour, this sturdy little scout bomber is meeting the exacting demands of service with great success. The power plant is a Pratt & Whitney Twin Wasp Junior of 700 hp. A more recent model, now undergoing tests, is the XSB3U-1, similar to the SBU-1, but with a landing gear which folds backward into the fuselage.

The model is of standard construction throughout. In spite of its scale appearance it flies very well. However, it should be remembered that no model, however well designed, will perform satisfactorily if a poor job of construction is done. A warped wing or elevator might be unimportant on a light duration model, but on a heavy, fast flying scale model that piece of poor workmanship might mean the difference between a consistent flyer and a plane that looks good, but just won't fly.

Construction: Before beginning the model, assemble all of the pictures of the real SBU-1 that you can find. This will enable you to check your work as you go along and to add a great deal of small detail which has not been shown on the plan.

Wings: As the lower wing is used as a jig for the assembly of the fuselage, the wings are built first. Ailerons are optional. It is suggested that all movable controls be omitted on a flying model. To make the right panels of the wings trace the left panels which are shown in the plan on thin paper, and then holding the paper up against a window, recopy the panel on the back of the paper. Each wing is assembled as one piece. After the cement has thoroughly dried, cut the spars half-way through at each side of the center section and pin up the tips to the required amount of dihedral. Cement the spars again at the cuts. Put in the 1/8 sq braces for the struts.

Fuselage: All of the fuselage formers are made from 1/16 sheet balsa. Formers for the cowl are 1/8 and 1/16 thick as indicated. Make two halves of each former and cement the halves together. It will simplify construction if the stringer positions are simply marked and not cut out until the stringers are ready to be installed. This will prevent misalignment. Bulkheads A, B, C, D and the small bulkheads backing the nose plug are circular and their diameters may be obtained from the plan.

Tail Surfaces: Because of the long tail moment arm, the model flies with scale tail surfaces. The stabilizer is installed before covering so that a tissue fillet is formed.

Landing Gear: Complete details of the landing gear installation are given on Plate 3. This is for a flying model only, of course. A scale model will not require a shock absorbing system. Note that the wire saddle attached to the rear struts is cemented to Bulkhead G only. Use wire of approximately No. 12 gauge for all wire fittings.

Covering and Doping: Sand the frame of the model until there are no rough edges or projecting humps. Where you have used filled in or balsa covered construction, apply two coats of model wood filler, or three coats of clear dope, sanding between each coat. Then carefully cover the model, using the same color tissue as the part to which it is being applied will be doped. Spray the tissue lightly with water and allow it to dry and tighten.

For doping use a good grade of colored dope, mixed with thinner in the proportion of one part thinner to two parts dope. Apply as many coats as are required to give a good finish. The original model required three coats. Finally, attach the upper wing and finish the remaining detail.

Color Scheme and Details: SBU-1's have seen service with the First, Second, and Third Scouting Squadrons and the Sixth Fighting Squadron of the United States Navy. In addition, a number of the new Voughts have been consigned to the Argentine Navy. The individual builder, therefore, has his choice of a number of insignia and color combinations. As given in the plans, the Vought of the 6th Fighting Squadron has standard Navy insignia. All metal parts of the fuselage are gray and all fabric surfaces (shaded part of fuselage, lower wing and under side of upper wing with the exception of the tail surfaces are aluminum. The tail is all white. There is a blue band around the cowl, and the fuselage, and a blue chevron on the top of the upper wing. The top of the upper wing is chrome yellow. The Argentine Corsair is all aluminum with insignia as given on plate 3.

In adding the details note that the pilot tube or air speed head is attached to the right wing strut only. It is shown on the left side for convenience. Outline the fuselage details in India ink.

Flying: The model will probably turn out slightly tail-heavy because of the long tail. To, balance it either dope the propeller, which; should be hard balsa anyhow, or add weight to the. inside cowl face. Modelling clay is a convenient weight. Six strands of 1/8 rubber were required on the original model which weighed slightly under two ounces." 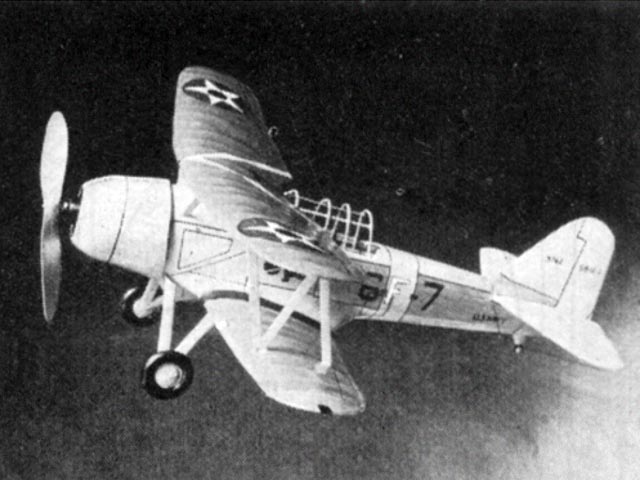