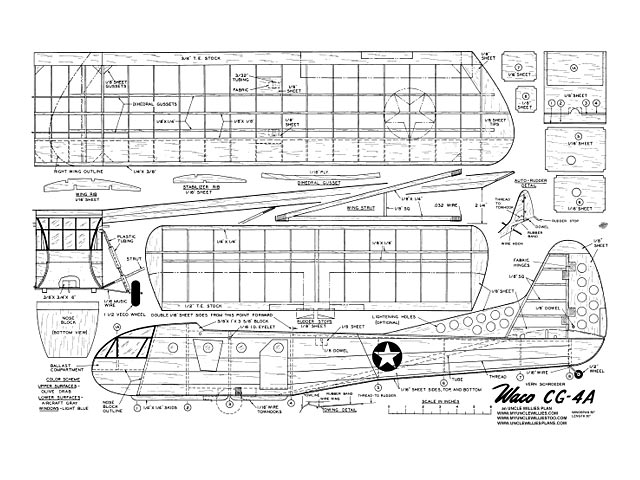 Note this plan scan is stamped as from Uncle Willies.

Quote: "The Waco glider. A splendid lifelike model of the famous CG-4A troop glider. Easier to build than many a free flight, it makes stable flier.

Swooping in at night, completely surprising the unsuspecting defenders, our glider troops by morning had disrupted the enemy beach defenses to such an extent that our following seaborne invasion practically walked ashore. This was the story made possible by the role of the Waco CG-4A in the Allied invasion of Sicily on July 9, 1943.

First used by the Germans in the lowlands of Holland and in the occupation of Crete, early glider operations proved to be none too successful. Due to the staggeringly high number of casualties sustained in mountainside crashes and landing mishaps, our military leaders questioned the practicability of glider borne troops in battle.

The Allies solved this problem by building their gliders so rugged and so tough that they could be literally wrapped around tress and run into buildings with little or no damage to either men or material.

The most outstanding of these rugged gliders, which participated in the airborne invasions of Sicily and Europe, was the CG-4A, designed by the Waco Aircraft Company, Troy, Ohio, and built by sixteen different manufacturers during World War II. Because of its steel tube construction and its ingenious three section fuselage, our troops were rarely killed and our material rarely damaged, even in the roughest of landings.

For service and training work a permanently attached shock-absorbing landing gear was used, but for battle use a droppable take off gear and wooden landing skids were used, enabling better landings to be made on rough terrain. A total of 13,909 of these 'boxcars' were built and delivered during the years 1942 and 1943.

Our ship is built to a scale of 5/8 = 1 ft giving it a span of approximately 52 inches. It is equipped with removable landing gear and wing struts which are used for display purposes only and are not recommended for flying purposes. The flying weight is about 15 oz.

Fuselage: Cut two sides from medium or hard 1/16 sheet balsa. After reinforcing the front portions from the rear of bulkhead 4 forward with soft 1/16 sheet, mark off the bulkhead locations. Now cement the 1/4 in square balsa. Beginning with bulkhead 1 join the two sides together. Now add bulkheads 2, 3 and 4 and allow the assembly to dry before proceeding. When dry add bulkheads 5, 6, 7 and 8 in that sequence..." 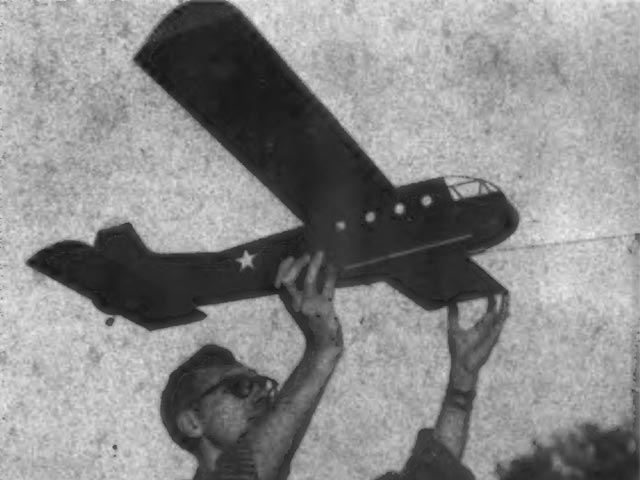 Way back in 1959 when I was a printing apprentice and a 'back garden flyer' (Frog and Keilkraft), I spotted Vern Schroeder's Waco 'Hadrian' in a borrowed 'Model Airplane News' and WANTED ONE! Now you have published it, my dream can come true. Happily, now I have a meadow a few minutes walk from my home so I can indulge myself but I suppose I should finish previously started models first!
AlanV - 01/11/2018
Add a comment