Quote: "THE Foote Racer is not a new airplane. It is the final version of a ship that has been developing since 1942. In previous versions it has won many contests throughout the State of California; it missed taking first place in Class B at the big State Championships at Fresno in one year by 3 secs. The following year the same ship took first place in Class B at the same contest with the highest time for all classes. It has been built and flown by a large number of modelers to test its reliability and stability. All have agreed that it is one of the most stable and best-performing ships they have ever flown.

The ship has been flown with almost every Class A and Class B engine on the market. Weighing in at 20 oz., with a Class A engine in its nose, the Racer is a floater beyond comparison. Because of its clean lines, the climb is still as good as that of most of the smaller Class A ships. With larger engines, the ship becomes a racing skyrocket. Yet its super stability characteristics will roll it out of loops and spiral dives at a truly breath-taking speed. Although faster in the glide when loaded down with additional weight, its aspect ratio of 12 still insures a float beyond comparison, and it once won a Class B event at a weight of 36oz, flying against lightly constructed ships where no weight rule was in force. This makes it an exceptionally capable airplane for the PAA-Load event, and space can be provided for a pilot for entering this event, as will be explained later.

A pop-up dethermalizer is shown on the plans and is strongly recommended to prevent lost ships. A new construction idea for the stabilizer platform strengthens the boom where most ships have a weak point. Ignition can be installed in the space forward of the PAA-Load pilot compartment, but spark ignition is not recommended, especially in Class A ships, because of the additional weight. Care should be used in selecting the wood. All 3/16in sheet should be soft. Spars should be fairly hard stock, and 1/16in sheet and 1/32in sheet should be medium. When building for the larger engines, harder wood should be used all the way through, and especially in spars..." 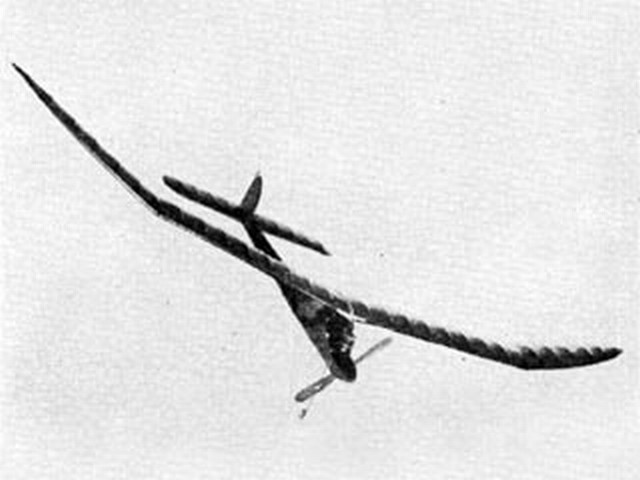