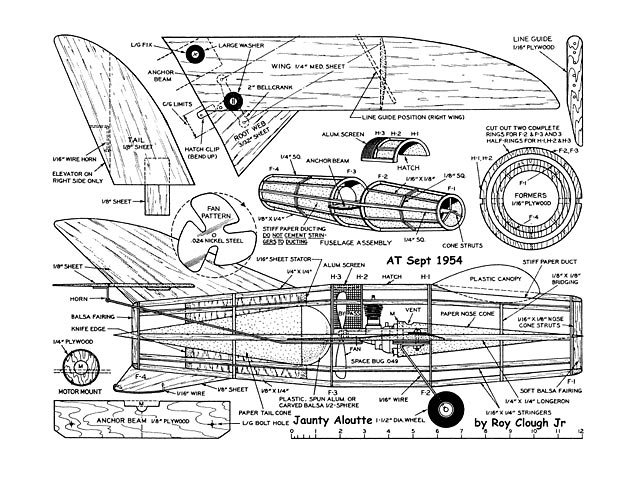 Quote: "This model was developed with the idea of proposing a new competition class: control line speed, turbine jets. We further propose this class be limited to engines of .049 displacement; that nozzle cross-section area be held to 6% sq. in.; that no afterburners be permitted; that no dollies or drop-off gear be used and the minimum line length will be 25 feet.

Now, what the heck? Are there not enough different classes already? Why try to introduce another one, and why the limitations? Well, look around at present speed, free flight and stunt jobs. For several years now the basic design philosophy has been static. It is pretty well settled how to go about designing a good model in any category. So many people have been refining the things for so long that today it is no longer a question of how to design, but rather which engine, with which prop and which fuel seems most suited to the weather conditions on the day of the official flights.

The pioneering is well over; today the emphasis is on handling technique and knowhow. Therefore it seems timely to introduce something new, which is not settled, a new area of design experimentation with plenty of opportunity for the fellow with ideas, imagination and a desire to use them. We think the ducted fan speed model is a natural for this purpose. The proposed limitations we consider wise. By keeping the displacement down the confusion of several classes within a category is avoided. Outlawing afterburners makes sense because of the inherent fire hazard and because it will place emphasis on efficient duct and fan construction; the elimination of dollies and drop-off gear should produce some interesting functionally integrated designs; and the specification of a minimum line length of 25 feet will prevent minimal-thrust jobs from cheating take-offs via centrifugal force.

Sound interesting? Then a good time to start is right now, and a good model to start with is Jaunty Alouette, a swallow-winged blowhard that will probably revise heavily upward any estimates you may hold at present on ducted fan performance. The original model, several times re-built, weighs over 9-1/2oz without fuel in the tank. This is about 3-1/2oz over what is generally considered top weight for a free flight .049 fan. Yet it becomes airborne in 10-20 feet, depending upon the surface, and tops 40 mph in flight - which is the scale equivalent of a big jet edging Mach 1. It does this, incidentally, on a moderate-performing engine. We purposely did not use a really hot mill in the job because we wished to emphasize design efficiency..." 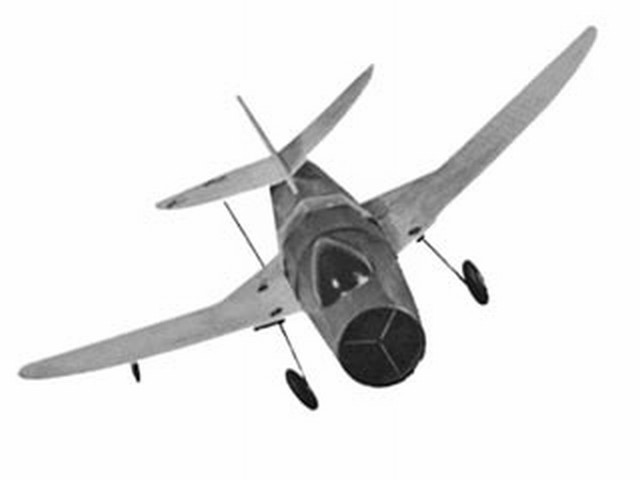