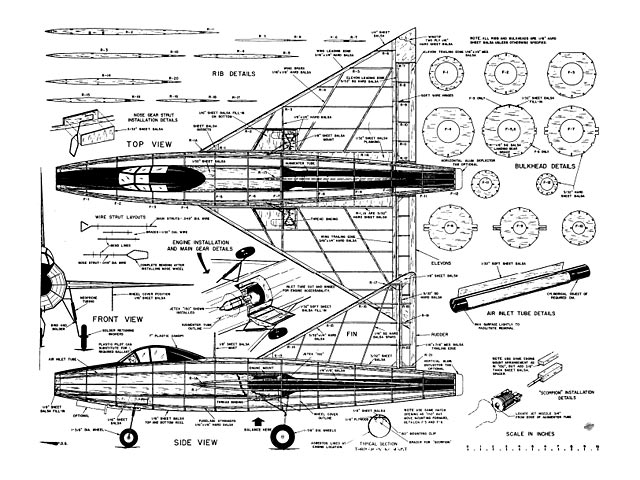 Update 26/10/2016: Replaced this plan with a slightly clearer copy at higher res, thanks to dfritzke.

Quote: "For a real jet age project what could be more exciting than this Jetex-powered model of famous Air Force fighter. Convair Delta, by Paul Del Gatto.

Jetex flying has come a long way since it was introduced shortly after the war. Interest steadily increases, largely due to new and stimulating Jetex categories in the AMA rules. Then, too, a more suitable means of propulsion for the latest types of scale models, which usually are jet-powered aircraft, does not exist.

Ducted fan installations, which permit the use of standard engine arrangements within the actual structural framework of the model, have had some success. Yet, there is little question that such an installation, while suitable for experienced model builders, has yet to reach the stage where the average model builder can achieve the same success.

Up until now, most of the author's experience with Jetex models has been confined to non-scale or contest-type models; yet we always wanted to design and build a large, authentically scaled, Jetex-powered model. We selected the Convair for several reasons. To begin with; for the size of model we had in mind, it lent itself nicely to a variety of Jetex engine installations, complete with augmenter tube. Our hopes were not centered around high performance, but rather on a model which was pleasing to the eye and could be used constantly for weekend flying fun.

In designing the structure, the old stick-and-paper type of framework was favored over other quicker methods for easy assembly. For this model a lightweight, built-up structure was almost a necessity, unless a model half the size was to be flown with twice the power. Besides, this type of building was fun. Building enjoyment is something now too often forgotten. That patience is required to build the model there can be no doubt. However, there is nothing about the model's construction that is beyond the skill of the average model builder..." 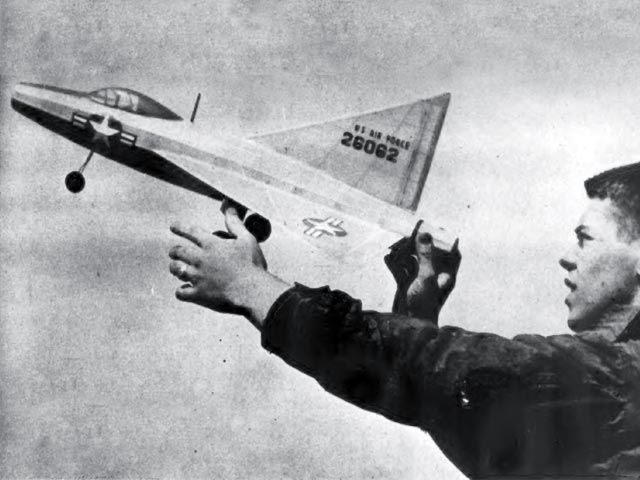