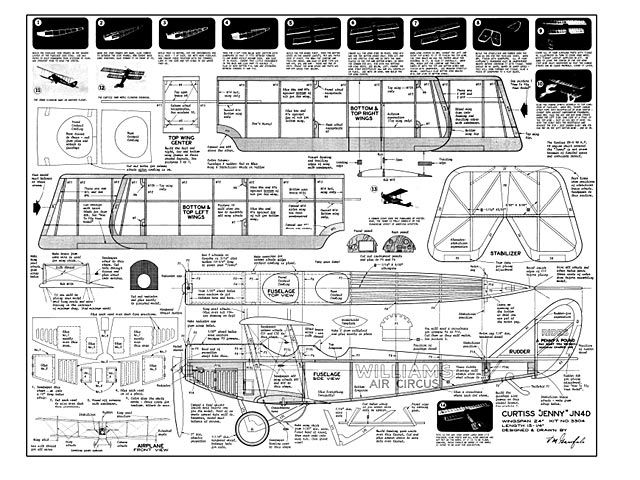 Curtiss Jenny JN4D. Scale rubber biplane model. Comet Kit no 3304. Thanks to JRSpielman for helping out with the designer on this. 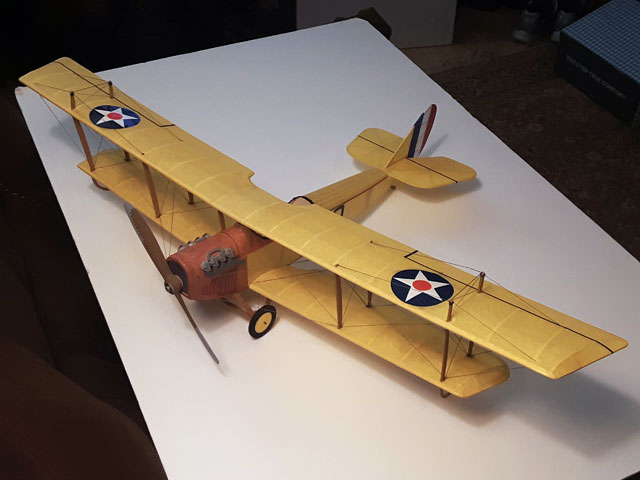 Colour pic of completed Jenny by ckimmey [more pics 003] is from here http://www.rcgroups.com/forums/showthread.php?t=1462938&page=15 showing a model with electric RC conversion.
SteveWMD - 24/10/2012
Hi folks, here are a few pictures of my Curtiss Jenny from the Comet plans on Outerzone [model photo & more pics 004, 005]. I built it extra light with split ribs, balsa wheels and laminated tail surfaces with the intent to fly it this summer. But, I have to admit, I'm thinking of letting it be a Hanger Queen for a while first. Thanks for making these old plans available again!
DaveBarber - 26/11/2018
It was joked by early pilots that the Curtiss Jenny was in actuality a bunch of parts flying in formation. Nevertheless, it was dependable as well as easy to fly and maintain…normally. According to my father, one Sunday morning, the sermon at his little country church was interrupted by the sputtering engine of an airplane as it rolled to a stop on the road just outside. Everyone rushed from the church to get their first close look at a genuine flying machine. That would have been around 1922. “It was green…had white wings” according to Dad, “and all the adults said it was one of those new mail aeroplanes.” The only airplane anyone had ever had occasion to see had been in the air…flying…but certainly never up close. There it was. A group of men pushed it off the road where it sat for a few days…then, one day it was gone…repaired and flown away.
So here’s a Comet Models Curtiss Jenny (oz97), finished as my father described it to me…in his honor [pics 006-011]. My father delivered the mail for more than 40 years after the end of World War 2.
Neal Green - 27/05/2021
Nice way to pay a tribute, Neal :-)
"Neither snow nor rain nor heat..."
Miguel - 27/05/2021
Hi Miguel. Dad was the best unofficial meteorologist there ever was...with all the time he'd spent outdoors in his life...I swear, he could look at the sky, smell the air...and accurately tell what weather was coming...at least locally. It's not difficult to imagine the impact on his memory...that first encounter with an up-close n' personal Jenny.
Neal - 27/05/2021
Greetings,
Neal, you talk about the Jenny being a bunch of airplane parts flying in formation. I always thought that about the BE2a. None of that aircraft’s look like they belong together. At least most of the Jenny’s parts seem to come from the same designer.
Let’s be careful out there.
James Hickman - 28/05/2021
I believe this airplane parts in formation description has been applied to several aircraft at one time or another, I'm sorry if I'm pouring the cabbage soup over anyone's campfire 8-)
Miguel - 28/05/2021
Few aircraft exemplify the idea of "airplane parts flying in formation" as much as the Royal Aircraft Factory B.E.9. Another of note was the Dufaux C2. Despite knowing how these planes were held together, I find it incredible to believe that they flew at all.
Jan Novick - 28/05/2021
I think the quip of “parts flying in formation” might refer to war-surplus Jennys that were civilian-owned, i.e., barnstormers…in poorly maintained status…that old “held together with baling wire and chewing gum” idea. The suggestion is that even in that condition, Jenny would fly, and fly well. In a properly-maintained state it was outstanding, good enough to serve as the primary trainer with the U.S.Army as well as the Royal Flying Corps/Royal Air Force. Jenny formed the basis for American civil aviation and operated into the early 1930’s…not bad for baling wire and chewing gum. That OX-5 engine, while not a world-beater…it was never intended to be…was well on its way toward becoming the famous Allison of World War Two. So Jenny gets my vote. Thanks gentlemen.
Neal - 29/05/2021
When I started reading your comment I immediately thought of the SPAD A2 but your examples are just as egregious if not more! This was the time of 'la fée verte', absinthe, and somebody must have been helping themselves to it for a lot more than they should :-) All right, accepting absinthe's reputation as a psychoactive is undeserved, the ethanol involved was more than enough explanation.
Miguel - 29/05/2021
Hi Neal, when I wrote my comment I hadn't yet seen yours right before, and I am in complete agreement. Anyway, a number of "parts flying in formation" (I remember this about the P-47 as well) sounds much better than "Shake, Rattle and Roll" :-)
Miguel - 31/05/2021
Add a comment