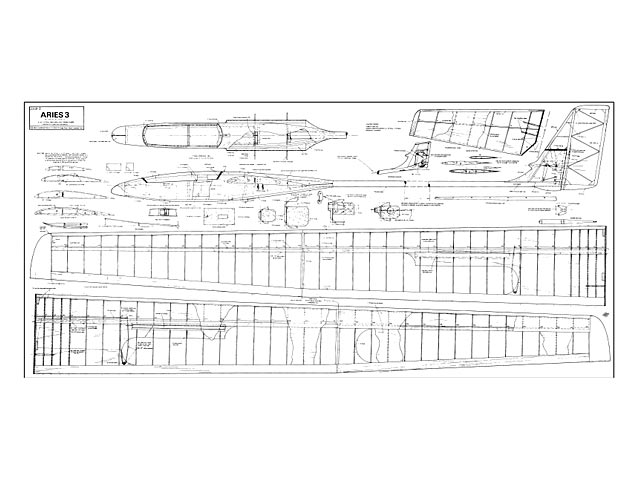 Quote: "DURING THE summer of 1977 the original ideas for Aries started taking shape, when I decided that the Cirrus-type models I had been flying up to this time were not competitive enough for serious competition work. What I wanted was a model that could soar in flat-calm conditions yet, when ballasted up, could be made to penetrate through rough wind conditions and put up reasonable flight-times in the process. I wanted as big a model as was practical, yet was still going to be very easy to handle close to the ground. (Landing bonuses can be very important in competition flying.)

With the above desires in mind, rough sketches were made until a pleasing design layout finally appeared. A polyhedral wing was chosen because of the markedly better handling characteristics this layout has compared with straight dihedral. A flat-bottomed wing section was used with washout built in towards the tips for extra stability. A fairly thick all-flying tail plane with a fully symmetrical section, and an all-flying rudder were chosen. The original sketches were of a pod-and-boom layout but for convenience an epoxy/glass Super-Alpha fuselage was used in the first model of this series. The second and third models were pod-and-boom. Releasing hooks were incorporated into all the models, as were airbrakes, which have proved themselves worth their weight in gold on many an occasion.

The culmination of all these ideas, plus any detail changes I chose to carry out for improved reliability and performance, is presented here as Aries III.

As anyone who is considering flying this model should be a fairly competent builder, I have not gone into great and lengthy details on the construction of the basic parts. However, where the design differs from the norm a few pointers have been given.

Wings. I prefer to start with the wings while I have sufficient excess enthusiasm to build them accurately. The wing ribs are made by the sandwich method. The inner panels are constructed by firstly pinning the leading edges, trailing edges, bottom sheeting and spar to the building board. All the balsa ribs can then be trimmed and glued in position using PVA. The balsa/ply sandwich ribs are epoxied into position in two parts, front and rear. The top spruce spar is added next, followed by the false leading edge pieces..." 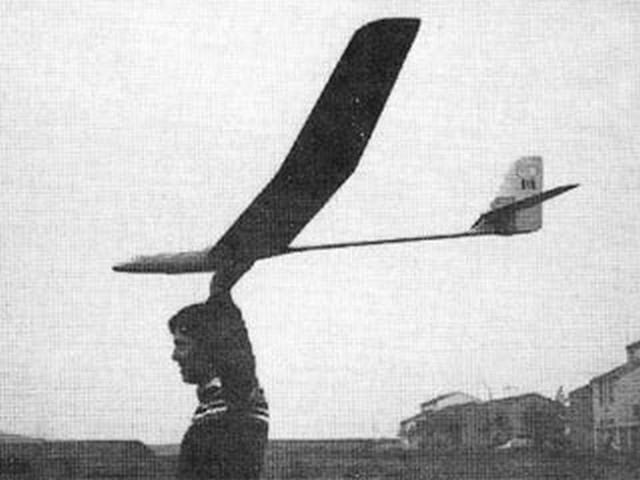