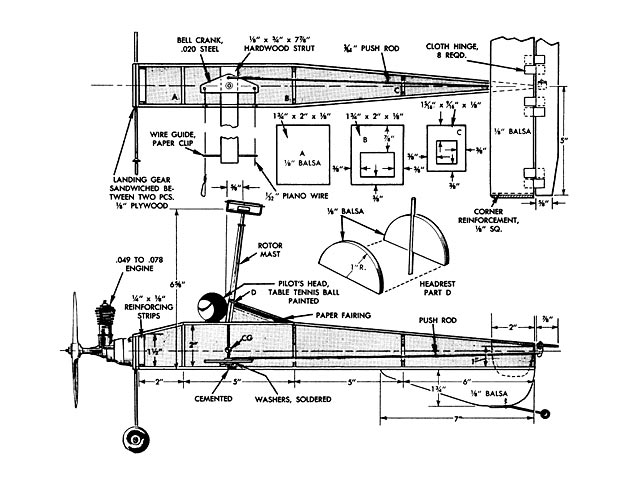 Quote: "BEFORE YOU conclude that this is a model of a helicopter, take another look. It's a model plane with a spinning wing, or rotor, that windmills in the slipstream of a conventional propeller to provide the lift necessary for flight. The rotor is self-spinning and that's where the autogiro or gyroplane, as it is now called, differs from the airplane and the helicopter in appearance, in flying characteristics and also in construction. And on the end of a control line it is a new experience for model-plane fans.

Control-line gyros have been built, of course, and flown with fair success. But none could be considered spectacular performers. Some showed a persistent tendency to roll up in the control lines and some that performed satisfactorily otherwise developed an arm-shaking vibration. This appears to have been largely due to use of a rigid motor, which tended to develop a condition of unbalance while in flight. The rocker-type, or seesaw, rotor used in this model starts spinning quickly and easily and the gyro lifts off and flies smoothly without dipping, diving or rolling. It pulls hard, but not too hard, on the control lines and settles as lightly as an autumn leaf when the motor fades.

The fuselage is simply an elongated balsa box made mostly from 3/32in material except the bulkheads, A, B and C, and the stabilizer which are 1/8in stock. Although the over-all size of the bulkhead C is given, you may have to do some fitting of this member to assure a true fairing of the fuselage sides and top piece. The fuselage is fitted with a conventional engine, propeller, landing gear and a standard controlline elevator for controlling the gyro in flight. The rotor mast centers 4-1/4in from the forward end of the fuselage. In assembly it passes through the bottom of the fuselage, the bend at the end being seated and cemented in a notch cut in the bottom of the fuselage. Note that it also passes through the control strut and the bell crank. Washers are soldered above and below the crank, permitting the latter to swing freely on the mast. After installing the controls and the reinforcing strips at the forward end of the fuselage, cement the fuselage top pieces in place, then the pilot's head and the fairing.

Study the rotor drawing closely. Note that the blades operate at a negative pitch and that the rotor, although stiff from tip to tip, is pivoted at the center to permit a seesaw motion. Stops on the hub pivot, limits vertical motion so that the blades won't strike the tail..." 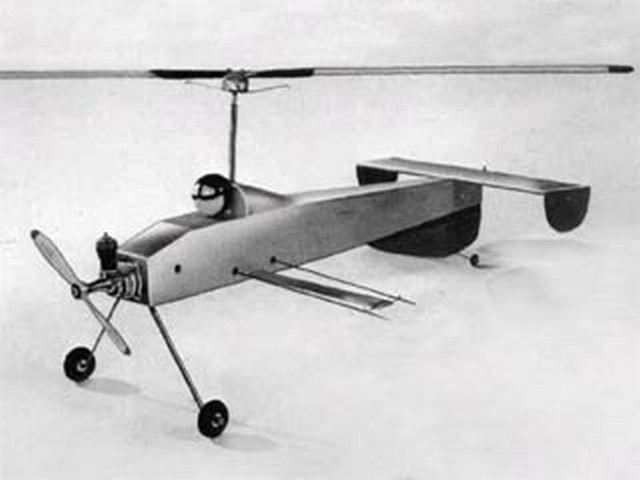