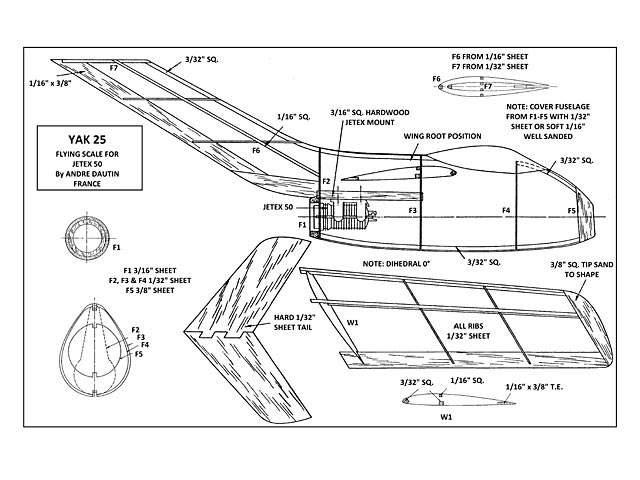 Quote: "Finally a YAK 25 design by Andre Dautin from France. This is an unusual plane to model and looks really distinctive with its very high T tail and barrel like fuselage. The design was based on the Jetex50 so it is not very large. As to its flight performance I will not comment because I was never enthralled by the Jetex designs. I do, however, wonder how one accessed the motor buried deeply inside that fully sheeted fuselage."

Note this plan was published only as a one page drawing, there was no article text.

Note this 'scale' plan is a particularly fanciful rendition of a generic 1950s Soviet fighter. Apart from looking like a jet, it bears no resemblance to the real-world aircraft prototype the Yak-25 (either version). Rather, it actually looks quite a bit like a Focke-Wulf Ta 183 Huckebein.

Hi, I googled and could not find a Yak-25 but I found a Focke Wulf TA-183. Maybe rename to Yak-25/ta-183 see also http://archivesite.jetex.org/archive/jetxfiles/200404.shtml
KLH - 19/01/2018
Look up the Yak-25. It's not this plane.
anon - 21/01/2018
I know. That's what I said under "about this plan" :)
SteveWMD - 21/01/2018
Regarding the discussion about plan number 9693 Yak-25/ Ta-183, in the early to mid '50s the aviation media touted airbrushed "photos" as the latest from the Soviet Union, the new Yak-25. As later years brought more WW2 data, it was obvious that it was Kurt Tank's design. Look at Argentina's Pulqui II by Kurt Tank [JP Evans' Pulqui II scale model is here on OZ]. As an old person, then a young teen, I remember all of this. So, while it is really a Ta-183, the Russians had fun passing it off as their new Yak-25. The design does fly well as I have seen an R/C fly at a contest and nothing broke off.
EdShearer - 22/01/2018
I have seen this design in an old book of Soviet aircraft. It was an airbrushed artist's impression of what was purported to be a Russian interceptor. I've long since forgotten what book this was, but it was typical of those produced in the 1950s when information about Russian aircraft was scant to non-existent. The nearest I can find to it now, is a picture of the old Aurora kit of the 'Yak 25', produced around that time as a 'best guess' as to what the latest Yak may have looked like: https://www.tapatalk.com/groups/retroscalemodeling/aurora-yak-25-aka-mig-19-t8402191.html. It is very similar to the plan on OZ but for some reason Aurora added a Sabre-type nose cone. Note that this is known to be a fictional aircraft by today's plastic modellers, and I think it's pretty clear that the OZ plan is as well. Perhaps the design still has some nostalgic interest, however, as a remnant of the days when anything remotely plausible was accepted as gospel by an aviation-obsessed audience, fearful of the communist menace.
SB - 22/01/2018
It looks like the 1953 model was based on the 1952 3-view from Björn Karlström, who was highly respected for his aviation drawings at the time [more pics 003].
Chris Pinn - 16/01/2020
There was indeed a Yak-25 in 1947 with straight wings but the prototype died an early death - It's type designation was sponged off, to be resurrected a few years later with the two-engine Yak-25 family which did enjoy long service. Still in the close post-war period there were quite a few others with this configuration, that is the pilot riding the engine and the tail at the end of a pylon. These would be the MiG-9 , Yak-15, -17 & -23 and more and there was of course the SAAB 29 'Barrel' but Bjorn wouldn't confuse this one!
This was another Dark Age in aircraft recognition, with the Russkies doing their annual 'Farnborough' at Domodedovo airport - or was it Tushino? - where they showed the darnedest airplanes and named them what they wanted. for the benefit of maskirovka and the despair of observers like the great Bill Gunston who chased his own tail trying to make sense of this mess. To this add the fantasy of the press like Popular Mechanics and others of the same ilk.
For myself I find the the Ta 183 an unlikely candidate being so obscure. I guess the first time I heard of it was through the Luftwaffe'46 tribe. All these types I quoted had the stabilizer at mid-fin, the only ones with the T-tail were the 183 and the Pulqui II mentioned above which were closely related. I guess we'll never know, at least I won't :-)
Miguel - 16/01/2020
Is the entire body sheeted or what?
Pete - 06/06/2020
Sheeting described on the plan.
Pit - 06/06/2020
Pete, your question is answered on the plan, upper right.
Bill - 06/06/2020
Add a comment