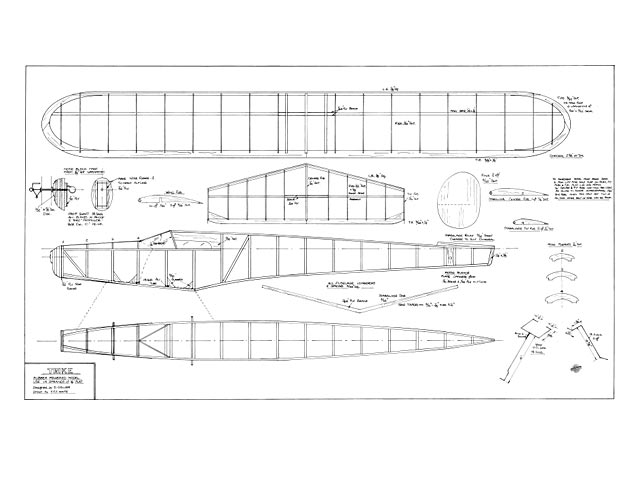 Trike. Rubber sport cabin model. This is a later, but faithfully redrawn, copy of the plan as published in Aeromodeller.

Quote: "Fuselage. Construct in the usual manner by pinning down the longerons and then cementing in the spacers, beginning with the one which fits at the cabin end of the top nose longeron. Cement 3/32 in sheet balsa, which surrounds cabin window, where shown on plan. Build another side on top of this one and, when dry, take the two from drawing and separate them carefully with a razor blade. The top and lower longerons of each side can now be cemented together at the tail and at approximately the correct angle. When dry add tailpiece.

The next step is to cut to length and cement in place the top and bottom spacers which occur; top, at front of cabin, and bottom, below this, respectively. Now add all spacers from cabin to tail. Cut nose spacers and formers and after cementing these lo fuselage, seeing that nose is square, shape formers 1, 2 and 3 and their corresponding bottom spacers. Put these in position and cement well. The side and lower formers, corresponding to former 1 may be made by cementing lengths of 3/32 square on to the fuselage spacers and sanding them to an elliptical shape.

Cover the nose with sheet and trim off all surplus balsa at front former, after which, sand the latter flat. Make a 1/32 in plywood nose-former slightly oversize and cut out a rectangle, leaving a hole the same size as that in the fuselage nose. Cement this firmly to the nose former and sand it flush with the contour of the nose. Tightly bind two aluminium tubes (cut to correct length from drawing) to pieces of square balsa, and cement these well in their respective places. Add gussets and also the bamboo pegs where shown. Latnin-ate a piece of in. balsa and a piece of in. plywood and from it cut two shapes to fit between spacers at tail as shown on plans. Cement these in place and drill a 1/8 in hole through each piece, after which complete fuselage by adding bamboo framework to cabin.

Noseblock. Make this of four laminations of 1/8 in sheet, one of 3/32 in, and a sixth, which will be the spigot of 1/8 in. Take the rectangular piece of 1/32 plywood, previously cut from fuse-lage nose former, and cement it to the balsa spigot. When drilling the block incorporate slight down-thrust..."

Update 31/07/2018: Added article, thanks to Mary, from https://rclibrary.co.uk/title_details.asp?ID=2245 this includes the original drawing layout as published in the magazine pages, in 1942.